Coverage of Fundamentals of Lines and Planes

I was helping a high school student with some fundamental concepts of planes and lines, when I realized I am rusty on some definitions myself. I found some minimal coverage in his high school math and precalculus textbook, and I also found a section on my vector calculus text by Marsden. However, none of these coverage seems to be comprehensive - in particular, I could not even find a definition of what it means for two planes to be perpendicular.

Geometry books like Hilbert and Hartshorne are not at the right level for a senior high student or a freshman. I would imagine there are some books out there that lays out the fundamental definitions, theorems, and proofs involving the perpendicularity of lines and planes, and their parametric and symmetric equations.

What kind of books cover these things now? Or are students expected to learn this from the Internet?

If the student attends a school that has a distinct Geometry course (typically taken in 9th or 10th grade) then it will probably use a textbook similar to Glencoe Geometry or HMH Geometry. I have one of those open in front of me now; looking at it, I see that the sequence of topics runs like this:

But (somewhat to my surprise) "two perpendicular planes" does not appear to be defined or ever used anywhere in the context of the book. I don't know that it's possible to say why that concept is never invoked, but I have a conjecture: The typical (?) definition of "perpendicular planes" goes like this:

That, at least, is the definition I found in the first few Google search results for "perpendicular planes definition" (examples: here and here). Notice, first, that this definition involves two quantifiers: An existential quantifier on $m$ (we only need to find one line $m$ in $M$ that meets the required condition), and a universal quantifier on $n$ (once we have chosen $m$, every line $n$ in $N$ needs to be perpendicular to it). That's conceptually quite subtle, arguably on a par with the well-known conceptual difficulties around the quantification in epsilon-delta proofs.

I suspect that the conventional wisdom among curriculum designers, to the extent that it has given any thought to the matter at all, is that the potential benefit of defining perpendicular planes is outweighed by the difficulties entailed by the definition.

It seems to me that another possible definition would be to say:

But whatever advantages this other definition may have, they are also probably outweighted by the semantic complexity of the definition, which requires six geometric objects (not only the two planes $M$ and $N$ but also the three lines $l, m$ and $n$ and the point $P$) to define a single relationship. For 9th or 10th graders, it's a disaster waiting to happen.

So it does not surprise me that Geometry textbooks avoid the problem of defining what it means for two planes to be perpendicular. On the other hand it does surprise me that they avoid the concept altogether. High school geometry typically treats rigor as a kind of aspirational value, not an absolute commitment. I think it's pretty surprising that I don't find any exercises that show, for example, a three-dimensional solid (say a frustrum) and ask the student to identify which planes are parallel, which are perpendicular, and which are neither.

Now, all of the above assumes you are interested in the geometry of lines and planes in space from a synthetic or Euclidean perspective. But if you want "parametric and symmetric equations" for planes (which I see was part of your question), then a Geometry course is the wrong place to look -- you want to look at a Precalc book. I have one in front of me: It's the Glencoe Advanced Mathematical Concepts: Precalculus with Applications. In this textbook we find that: 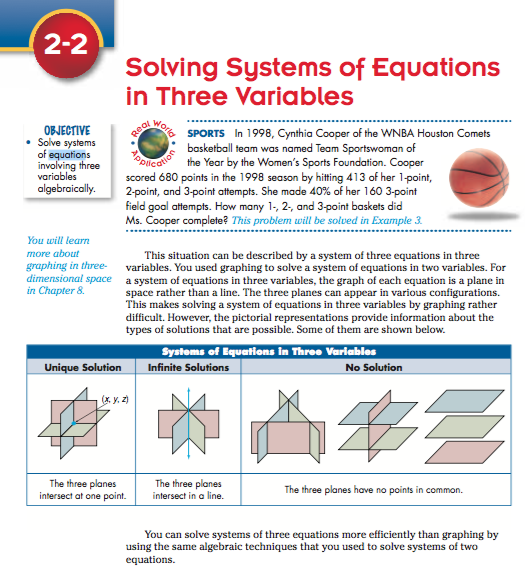 But notice that in this context -- solving systems of equations in three variables -- it does not matter whether the planes are perpendicular or not. All that matters is whether they intersect; the angle of intersection is irrelevant. 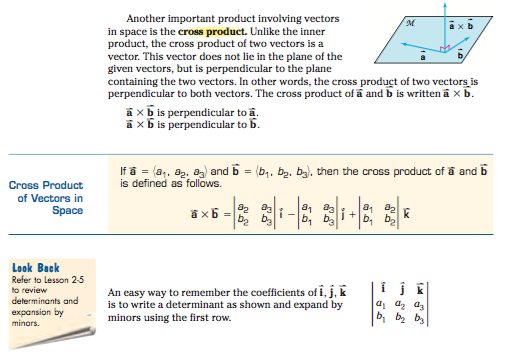 Such properties make it possible for students to answer questions like:

This all gets pretty close to what you are asking for. But I still don't see in this textbook any place where students encounter the definition of a normal vector to a plane, or study the relationship between the equation of a plane and its orientation in space, or talk about what it means for two planes to be perpendicular. I think that material is simply beyond the scope of high school mathematics in the United States.

One more thought: You asked about "Fundamental definitions, theorems, and proofs". Quite apart from content, you should probably be aware that very few mathematics textbooks at the secondary level (with the exception of Geometry!) are organized along "definitions, theorems, and proofs". Students learn techniques for solving problems, but those techniques are not organized into a logico-deductive structure, in which some properties are taken as primitive and others derived. That is not to say that such a structure does not exist at all, but it is not made explicit; the word "Theorem" is almost never used, and when it is used, normally a Theorem is merely illustrated, not proved.

In Finland this is covered (very briefly) in gymnasium, in the third course of extended mathematics, so most such course books should cover the subject. These are not rigorous treatments.

The one I'm looking at right now (Pyramidi 3) does the following:

There is one example and a total of 3 exercises, after which the subject changes. Everything takes two spreads (4 pages, page size somewhat smaller than A4): one spread for the definitions and one for the example and the exercises and one huge picture of a book that relates to one exercise but is not essential.

I don't remember explicit treatment of this in the university either, but might be that I have forgot. Linear algebra courses focused on other matters.

Not the answer you're looking for? Browse other questions tagged geometry reference-request or ask your own question.

30
What are the comparative advantages of open-book versus closed-book exams?
13
Wiggins' question #12
11
Reference requests: Is there a text that is even more advanced than books on "advanced engineering mathematics"
2
Are questions on overlapping solids of revolutions without prior definitions and instructions fair given that there are divided interpretations?
10
Pros and cons of randomised question generation
8
Seeking references for why it is good that students understand why mathematical rules work
0
Highly intuitive yet comprehensive and easily readable (student friendly) book on linear algebra which do not focus much on applications, just basics