Unless you have taught highschool algebra in Iran, you could not make sense of the phrase: Elephant and Teacup Identity! This is what teachers use to refer to the following identities:

Such reference is so common that today a colleague of mine (in a discussion about students' algebraic difficulty) referred to it assuming that I know what she is referring to. Whether or not such references would be of any help to students is an important question, but not my question now. For this post, the question is:

Do you know any of these linguistic references for communicating mathematics? It could be something that you use in your own class, or you have heard that someone else uses. Thus, it doesn't matter whether its usage is limited to just one class, or is as popular as the one I gave.

Edit. The first attempt to clarify the question. The question is looking for "non-mathematical" terms or phrases that are used to refer to mathematical objects (of any kind) mainly for educational purposes.

Edit. The second attempt to clarify the question. Admittedly the question is a bit vague. Do examples like "continuity", "saddle point", "horseshoe map", or "hairy ball theorem" count? I guess not. They are now formal terms belonging to Mathematics culture here, there and everywhere. What if we call what this question is looking for "mathematical slang". Here is a dictionary definition of slang:

A type of language consisting of words and phrases that are regarded as very informal, are more common in speech than writing, and are typically restricted to a particular context or group of people.

Interesting, after coming with the term, I found this paper "The blight of mathematical slang", that gives the expression "cross-multiply" as an example.

Edit. Following a number of suggestions for using a more informative title (see comments below), I changed it in a way that also better reflects the final version of the question (previous edit).

One of the most colorful names I have heard is the Chicken Mc Nugget theorem:

for any two relatively prime positive integers $m,n$, the greatest integer that cannot be written in the form $am + bn$ for nonnegative integers $a, b$ is $mn-m-n$.

The McNuggets version of the coin problem was introduced by Henri Picciotto, who included it in his algebra textbook co-authored with Anita Wah. Picciotto thought of the application in the 1980s while dining with his son at McDonald's, working the problem out on a napkin. 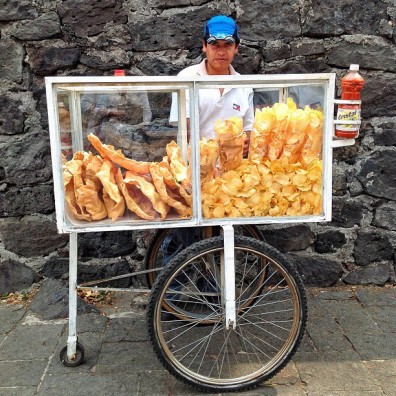 It is said that the formula is so famous that even the chicharronero knows about it; thus the name.

How about the shoelace formula for the area of an arbitrary simple polygon?

(Image from Wikipedia.) The formula computes the area from the coordinates of the vertices, essentially by a cross product to compute (signed) areas of triangles.
Share
Improve this answer
answered Jan 8 '16 at 4:39

If you simplify a term by adding and subtracting something you call this a "nahrhafte Null" in German (probably translates to "nutritious null"?).

In Russian, the Squeeze Theorem (a.k.a. The Pinching Theorem) is called "Теорема о двух милиционерах" — "Two Policemen Theorem". The idea is that if two policemen are holding a criminal between them, the bad guy is going to the same place, probably jail or precinct, where the policemen are going.

My elementary students always wanted to know the name of the symbol shown here:

We called it the division house as did many of my colleagues, but my students wanted a mathematical name. We therefore wrote to Dr. Math at Drexel. We were told there is no name and were referred to this paper.

For more about the origin of our name, see the following from Dr. Math:

"You might be able to call the horizontal line in the division symbol a vinculum, but I don't think there is a name for the whole thing. In fact, in the following page about the history of symbols, it is not named, but drawn, and the alternate text in the HTML calls it "a close parenthesis attached to a vinculum"See Jeff Miller's "Earliest Uses of Symbols of Operation""

I've just remembered that "Donkey Theorem" is used to refer to triangle inequality in geometry textbooks in Iran. The name implies that even a donkey which is on one corner of a triangle chooses the straight path (rather than the broken one) to get to the other corner where there is some hay to eat.

I checked to see if it is used elsewhere and I learned from this MSE post that it is also used in Turkey.

I first heard the term "stars and bars" a few years ago in Mathematics Stack Exchange. From Wikipedia:

In the context of combinatorial mathematics, stars and bars is a graphical aid for deriving certain combinatorial theorems. It was popularized by William Feller in his classic book on probability. It can be used to solve many simple counting problems, such as how many ways there are to put $n$ indistinguishable balls into $k$ distinguishable bins.

What is called "fórmula del chicharronero" in Central Mexico (see the answer by Rodrigo Zepeda) is called "Mitternachtsformel" ("midnight formula") in middle school in some parts of Germany. This is because, if someone wakes you up at midnight and asks what are the roots of a parabola you have to know this in a second.

I was about to write a comment to @Amy B division house, saying that in Iran we use

to denote $a$ divided by $b$, that a colleague entered the room asking me what I am doing. I explained and she told me that in their primary school (somewhere in Leicestershire in England) they called it (the symbol drawn by Amy B) "bus stop" where the bigger number needs to be covered and the smaller number remains outside! I thought it is worth mentioning as a separate answer.

Reading a paper from an English student in England I came across this sentence:

To expand brackets in Algebra, they were taught the "crab claw" method, a method that I was used to.

Since I had personally never heard of the term "crab claw" in Algebra, I thought it would be beneficial to add it here. 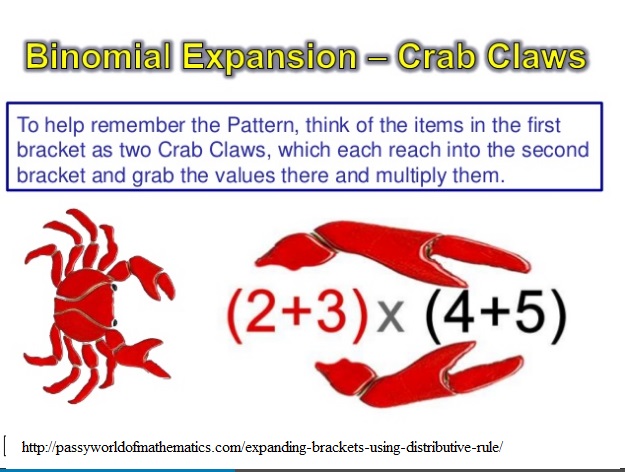 My school talked about sausages and cocktail-sticks, meaning questions where you have to find the formula for the $n$th term in the sequence. I never worked out what the point was.

The phrase chain rule in Calculus is a mathematical slang.

When I learned the rule at school, my teachers just called it "the function of a function rule", which describes precisely the situation in which you use it. When I got to university in a different state, they kept mentioning this "chain rule" and I had not the slightest clue what they were talking about.

Not the answer you're looking for? Browse other questions tagged examples terminology language-use or ask your own question.

12
Mathematical education slang
10
When and Why are different division symbols taught?

16
Rigorous proofs vs. illustrative examples
9
Specific examples (like elementary proofs,or simple problems) which appear rich in abstractions when observed through the lens of abstraction
7
Alternative terms for 'mathematical understanding'
9
Good examples of non-convex optimization
12
Mathematical education slang
8
Good metaphor to explain the difference between pointwise and uniform convergence
17
"Real world" examples of implicit functions
8
Easy examples of correspondence between global and local, as preparation for Gauss's theorem and Stokes's theorem
13
What can (and should) an educator do about ambiguous terms like "triangle", "square", etc?