I teach high school geometry and see many of my students fall in to the trap of "it looks like it, so it's true" -- a Van Hiele Level 0 to 1 thought process. For instance, when talking about parallel line angle relationships, once they realize that all pairs of angles (when you have 2 parallel lines and a transversal) are either congruent or supplementary, asking them to justify why the angles are congruent is "They're parallel and both look acute."

I continually remind them that explaining their ideas based off of earlier ideas is BETTER than using visual information, and provide not-to-scale diagrams to emphasize that fact, but I'd like to create a poster to point to to say something like "It's good that you noticed they look the same, but we're looking for at least a level 2 explanation here." I'd like to make explicit to my students my goal of moving them "up the scale" to a higher level of thinking.

For ease, the Van Hiele levels as presented to educators can be phrased as follows: 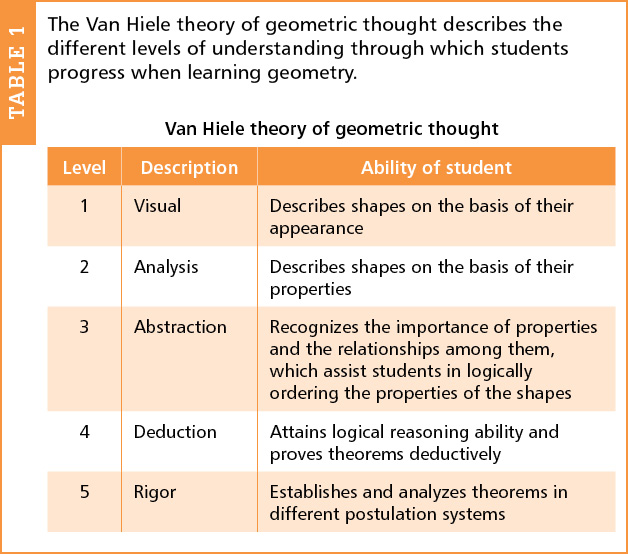 How can these be rephrased concisely and accurately in student-friendly language? For instance, I'm not sure how I feel about the rephrasingseen in even the table I provided. I have some ideas of my own, but would prefer to collaborate.

Is communicating this goal with students a good idea, in your opinion?

At what level do higher-level educators expect their students to be by the time they reach their college level courses, so I could possibly add this to the poster?

The argument has been made that this is sort of a misappropriation of the terms, because the levels are meant to define levels of understanding rather than levels of detail. I'm assuming what you're aiming for is that you can say to your student(s) "I'm looking for a level 2 explanation here", and they would provide you with an answer that would prove that they have achieved a level 2 understanding of that concept.

Thus, your table is going to look slightly different because it describes the type of answer you must give in order to prove a level of comprehension, rather than describing the level of comprehension itself. Note I may have misunderstood the levels above to some extent as I am familiar with the concept of levels of comprehension but haven't seen it formally listed in this form before (irony!). I think, even if you disagree slightly with my interpretation, the overall exercise will still be useful (I hope!):

It's a good phrase because it's memorable and it well-defines the concept. It also reinforces the lack of concrete data associated with this level of comprehension: "I can't prove it's true, but my understanding is that it's unlikely to not be true". This proves level 1 comprehension because... well, they have made a correct basic assumption based on the appearance of the problem.

Level 2 - I can deduce that it's true

"I have gathered some data on the objects in question, and can deduce that this is the case"

To show Level 2 comprehension, the student must be able to provide detail to support their Duck Test. In the original example given, it would be to say "I have calculated the angles, I know they're both acute so my duck test holds". They don't have to then prove that the corollary (angles are congruent) holds to show this level of comprehension. This proves level 2 because they have used actual data to make a correct assumption (well, technically an assumption).

Level 3 - I understand the Importance of these properties

"Not only can I deduce that this is true, I can extend my deduction to related abstract concepts"

To show Level 3 comprehension (IMO, there may be disagreement here), the student must show that they understand the relevance of what they are seeing. What are the consequences of the these two angles being congruent? Can the student make the jump of comprehension to the other properties that must therefore be true (related pairs of supplementary angles, the types of geometrical shapes that would be formed from sets of congruent angles, which lines must be parallel if these two angles are congruent). Rather than just seeing it's true, how can I USE the fact that it's true?

Again, note that the student isn't required to prove any of this yet, just understand the significance of the data. I might be able to deduce from the sound on the roof that it's raining pretty hard, but will it occur to me to take an umbrella when I go outside?

This proves level 3 because they can volunteer consequences of the properties they are seeing, showing an understanding of the abstraction - they understand what it means, not just what it says.

"I know that this is true, and I can prove it"

The student shows comprehension of both the consequences of the properties and the base principles behind the properties. They can use these base principles to prove their duck test rather than just deducing from "stuff I know is true". F.Ex., I can prove that these angles are congruent using my knowledge of angles and parallel lines, rather than simply deducing it's true because I've been told that two parallel lines bisected by another line at an angle forms a set of congruent angles.

This shows level 4 comprehension because they can prove their deductions rather than relying on "facts" that they have been told (Ability to prove the theorem from axioms, definitions, and previously proven theorems, as opposed to merely knowing how to use the theorem).

This shows level 5 comprehension because the student understands enough about the system to try and extend their knowledge beyond its current level.

"I know that this holds in this case, but can I be sure that it always holds?"

"This configuration looks interesting, can I use my knowledge of geometry to prove anything about it?".

It may not be exactly what you're looking for, but it's what I've understood your question to be asking for, and I hope it helps regardless! The unfortunate truth is that (in my experience) most students won't ever reach level 5, particularly in a compulsory subject, because it requires a significant level of enthusiasm to reach it. Maybe by showing the decent but relatively uninterested students that there is something to aim for beyond level 4 (which is sufficient to get you through pretty much any exam), it will encourage more of them to take that leap. If that's the case, then this will all have been worthwhile!

I think one problem with this whole approach is that one of the fundamental tenets of the van Hiele model is what the van Hieles called "the principle of separation":

a teacher who is reasoning at one level speaks a different "language" from a student at a lower level, preventing understanding. When a teacher speaks of a "square" she or he means a special type of rectangle. A student at Level 0 or 1 will not have the same understanding of this term. The student does not understand the teacher, and the teacher does not understand how the student is reasoning, frequently concluding that the student's answers are simply "wrong". The van Hieles believed this property was one of the main reasons for failure in geometry. Teachers believe they are expressing themselves clearly and logically, but their Level 3 or 4 reasoning is not understandable to students at lower levels, nor do the teachers understand their students’ thought processes. Ideally, the teacher and students need shared experiences behind their language.

Assuming this is correct, it would seem to follow that a student currently reasoning at level $n$ cannot possibly understand what you are asking for if you tell them you want them to be at a level higher than $n+1$. They would be literally incapable of understanding what you mean, because individuals must pass through the levels in sequence. The levels only make sense retrospectively, to a person who has already passed through them.

1-2: What does it look like? This is "basic" shape recognition.

2-3: Practical geometry. How many sides does a shape have? What kinds of angles does the shape have? Can shapes be put next to each other without any gaps?

4-5: Proofs, for the sake of proofs. The examples might have to do with geometric shapes. But the exercise of doing the proofs could be done just as well with algebra, or with matrices, or with sets.

The model is missing a step between 3 and 4: Constructive geometry, like the methods used by origami masters, old-fashioned hand draftsmen, and ancient Greek compass-and-straightedge geometers. These are practical exercises, which someone at level 2 can see the use of, and someone at level 4 can check the accuracy of.

3.5 Construction. Can you modify a shape to have particular properties? Can you make drawings of a 3-D object carefully enough that someone can make another object based on your drawings? What are the tolerances?

Unable to resist continuing my comment-rant: it is perverse to disbelieve a thing that appears to be true. Sure, appearances can be deceiving, but... mostly not so much. It is also perverse for mathematics teachers to create situations in which appearances are deceiving... since, in my opinion, the goal is not to teach paranoia, but to teach the amazing things that mathematical methodologies can uncover. Often (notoriously in physics) an idea is "only" a heuristic, but a very powerful one (as Dirac's quantum theory...)

It is also perverse to claim that obviously-true things "must be proven before we can move on". Yes, it is incidentally a test of our "proving-power" to prove "obvious things", ... but, here is the point, this is certainly not the first or primary point of mathematics. That is, mathematics really took off after Newton's epiphanies that it explained nature. Prior to that, the bourgeois games of the ancient Greeks (preserved for 2,000 years) were mostly a game played by those with sufficient leisure. Didn't explain anything about the world, and that didn't matter. Newton's and Leibniz' calculus "had issues", that were not fully resolved until mid-20th century, when A. Robinson and E. Nelson showed that infinitesimals are legitimate. The epsilon-delta debauche of the late 19th century was a slightly awkward first attempt...

That is, I worry that this purported summary of students' competence is based on a significantly misguided notion of the nature and history of mathematics.

Not the answer you're looking for? Browse other questions tagged secondary-education geometry language-use or ask your own question.

8
What is the name of this discipline in mathematics education?
-1
Questions about the calculus AP

5
How can I teach a $7^\text{th}$ grade student the concept of ratio and proportion
4
How to get kids thinking about the relationship between basic math (algebra) and English (or language in general)
19
Tips for Teaching Math in a Language Foreign to the Teacher
12
What does the research say about direct instruction vs. student centered approaches
6
The word "numeral", is it being taught and does the word exist for it in your language?
15
How does one tutor an A-level student past the derivative paradox?
22
Student asked me if it is necessary to simplify fractions at the end of answering a question. I'm not sure how to respond