What is the intuition behind the limit superior?

A real number $c$ is an upper bound at infinity of the sequence $(a_n)$, iff for all $\epsilon > 0$ almost all sequence elements $a_n$ are less then or equal $c+\epsilon$.

Given this definition, $\limsup_{n\to\infty} a_n$ is the smallest of all upper bounds at infinity (analogously as the supremum is the least upper bound of a sequence).

The limit superior can also be used to estimate the sequence at infinity: Having $\limsup_{n\to\infty} a_n = c \in \mathbb R$ we know that almost all sequence elements are less than or nearly equal $c$ and that $c$ is the best of all those upper estimates. Here we have to use "nearly equal" instead of "equal" because $c$ must not be an upper bound for $(a_n)$. Take $a_n=1+\tfrac 1n$ as an counterexample.

I know that the presented intuition still needs to be elaborated. But that's also the reason I am asking the above questions here... ;-)

I have two intuitions to offer:

While both intuitions are really valid definitions of the $\limsup$ I find both of them intuitive (at least as intuitive as I find any definition of the limit).

The idea behind the limsup that you write is not simple and will not convey a concise intuition. The shortest description of the limsup of a sequence needs two steps:

(1) The audience has to know what a limit point (also called accumulation point or cluster point) of a sequence is, and that a sequence can have many limit points, by examples.

(2) Granting the technical term introduced in (1), the limsup of a sequence is its largest limit point. (Similarly, the liminf is the smallest limit point.)

That's it! This is the same idea as Dirk describes in his answer. He also offers another intuition, but I do not find anything other than (2) to be so immediately intuitive, cutting right to the heart of what the limsup of a sequence means in such a concise way. The other possibilities offered here illustrate this.

I had known real analysis for a couple of years in college years before I read (2), and until then I never felt fully comfortable with limsups and liminfs, or solving problems involving them. After reading (2) I immediately understood this notion and never found it hard to use again. Ironically, the place where I found (2) was in a book on $p$-adic analysis! (See the first page of Chapter IV in Koblitz's Springer GTM on $p$-adic numbers, where he explains Hadamard's limsup formula for the radius of convergence $r$ of a power series in terms of $1/r$ being the greatest accumulation point of a sequence.)

So I would suggest explaning this as follows: look at terms in the sequence for indices that are so huge that you can't express them even using a computer the size of the universe, in the total time allotted to our civilisation, so that for all practical purposes they are infinite. Evaluate the sequence at those indices, and take the maximal value among the ones you get. That's the limsup.

Then you can point out that a way of writing this precisely depends on which background formalisation of analysis you use.

I would probably avoid the phrase "at infinity", since it's kind of vague and I'm not sure if it'd help someone who doesn't already understand the concept. Instead, I would talk more explicitly about numbers that are an upper bound outside a bounded segment — in other words, an upper bound if we throw out some finite initial piece. This works for both sequences and functions, as long as we take "finite" in the sense of "finite length" for functions. ("Bounded" makes sense for both as is.)

This latter issue seems a bit harder to intuitively describe for the limsup. If your audience is already comfortable with the notion of supremum and infimum, you can just say it's the infimum of all the numbers that are upper bounds outside a bounded interval. If not, I'm not sure what's the best way to explain it... however, I suspect someone who has trouble understanding supremum and infimum will inevitably have a hard time with limsup and liminf no matter how it's presented, because it's a strictly harder concept.

For me, this picture from wikipedia helped the most in understanding limsup and liminf 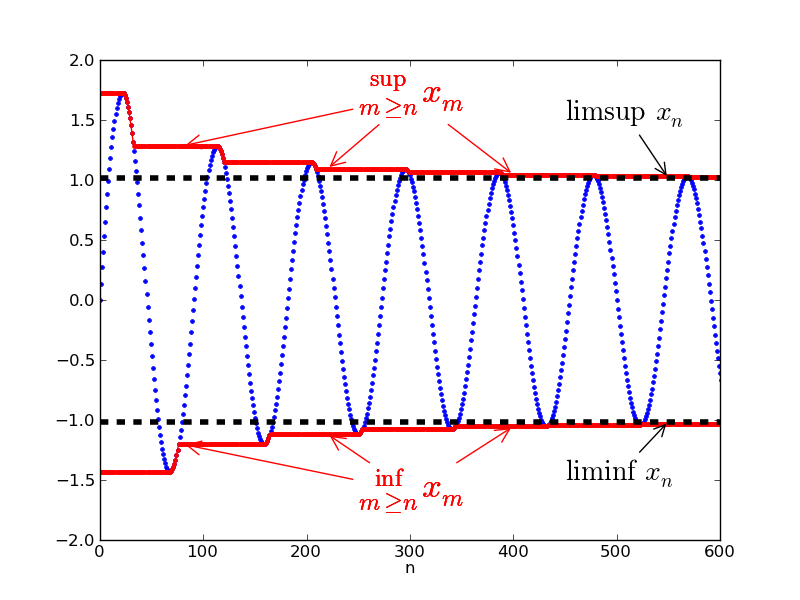 Limit supremum (of a sequence of numbers)

I will try to give intuition only using words, without using mathematical symbols.

Limit infimum (of a sequence of numbers)

You can write the story now.

29
For calculus students, what should be the intuition or motivation behind series?
18
Teaching limits of sequences before limits of functions in Calculus?
8
Any metaphors/intuitions for a limit of a sequence?
4
About the word "limit" used in calculus
8
How to make students comfortable with the use of axiom of choice in analysis
4
Differing Choices of $\delta$ in a Limit
3
Is this motivation for the concept of a limit a good one?