Should Euclid's algorithm be taught as rigid or flexible?

I have a slight preference for choosing $p$ and $q$ freely without any definite rule. As long as the equation $a=pb+q$ is satisfied and $|q|<|a|$, the algorithm works perfectly fine. If the choice doesn't have to be optimal, one can make rough approximations and avoid doing any exact division. Especially in the absence of calculators it is faster to divide roughly and take a few extra steps. This version is somewhat non-deterministic, and I call it the flexible version. I have given an example below2.

1 There are variations of the algorithm. In one of them one choose $p$ and $q$ so that $|q|$ is minimal. This is not what I'm after, and I would classify these variations as rigid.

There is some value beyond the algorithm to insist on the fact that quotient and remainder in an Euclidean division are uniquely determined as soon as one settles on some convention on the remainder. What they are exactly depends on ones convention (non-negative remained, smallest absolute value, or still something else) but if one fixes a convention then they are unique. I feel this is especially relevant in an algorithmic context, since to be aware of this is an issue when writing code or even just using a CAS.

Thus, I would not give up on the "rigid" version completely, and as you imply for some students it is easier to use a completely deterministic algorithm rather than to have some flexibility.

However, in the literature there are various versions of the Euclidean algorithm. One of them is the called the "subtractive Euclidean algorithm"; this version does not use division but just subtraction/addition, based on the identity you recalled that $\gcd(a,b)= \gcd (a-b,b)$.

I think it could make sense to discuss this version in addition, maybe even to start there.

If you have this, you then can discuss your version as carrying out several steps of the subtractive version at once. Like, if we want to calculate $\gcd(234,21)$ we anticipate we will do subtraction by $21$ at least $10$ times so we do not write all these steps but go directly to $\gcd(24, 21 )$. (And, if somebody does not anticipate it, no harm is done either.)

(Summary: I would suggest exploring it flexibly, but ensuring students also know the "rigid" version.)

Rather than directly addressing Euclid's algorithm for the $\gcd$ of two whole numbers, I believe one witnesses similar phenomena when covering the standard algorithm for division. For example, I observe analogs with your remarks of:

The flexible method can be confusing for some students, so the rigid version should probably be included anyway.

The same could be said of the scaffolding approach (sometimes called partial quotients since there are partial sums, differences and products explored en route to the other operations' standard algorithms) on the way to covering the standard algorithm for whole number division.

The flexible method works with relatively simple mental arithmetic, as there is no need to get the integer part of the division exactly right.

This is also true of the scaffolding approach: You don't need to "guess" exactly correctly.

Flexible use of the algorithm (which I had to come up with myself) made me see what it's all about.

I'd argue that this sort of sense-making occurs through the scaffolding approach as well.

In case others are unfamiliar with what is meant throughout by the approach to long division that I have described here, I excerpt the following from:

Strategy (a) below (from page 46) illustrates the scaffolding procedure: 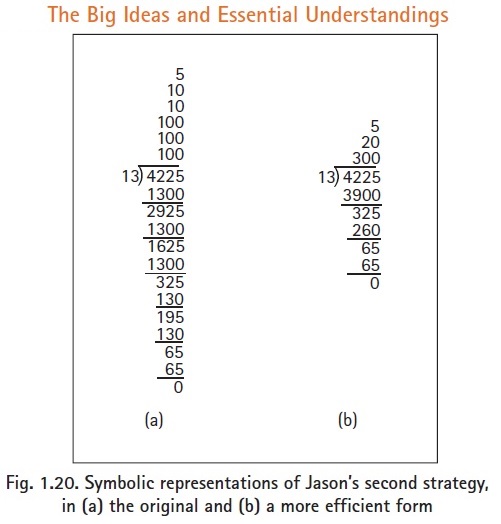 The goal in this approach to whole number division is to explore strategy (a) in a way that scaffolds towards the more formal approach in strategy (b). I maintain that this line of pedagogical reasoning from the elementary grades can be applied to your question about undergraduate mathematics, too!

To guide understanding of the why the Euclidean algorithm works on integers, I first discuss a "subtractive" version, based on the identity $\gcd(a, b) = \gcd(a - b, b)$. The question of how many times to subtract $b$ to speed up the process suggests itself, leading more or less directly to what you call the "rigid" algorithm (even selecting the remainder with least absolute value). Your "flexible" approach isn't far off, but I've never considered that in class.

Not the answer you're looking for? Browse other questions tagged undergraduate-education secondary-education number-theory or ask your own question.

26
How should LaTeX be taught to university students?
16
Should Eisenstein’s criterion be taught in high-school?
7
Rules to eliminate erroneous solutions in Trig equations?
5
Should the construction of triangles be taught?
1
Interesting math lesson on integers, Euclid's Elements, polyhedra, prime numbers, non-Euclidean geometry, arithmetic functions or graphs
8
Resource to supplement to Euclid's Elements
0
Could students learn a lot more from school if they're only taught number theory until way later?
2
What should I say about elementary number theory?
27
Should LaTeX be taught in high school?
3
How to explain the LCM algorithm to an 11 year old?