Should my 8th graders see a proof of the Pythagorean Theorem?

I've been teaching the Pythagorean Theorem in my 8th grade class, and I noticed something odd. In the book I'm using, the sequence goes something like this:

While I think this is very cool, it's not really a proof. They see a few example cases, and then the sum of the squares coming off of the legs of the triangle are exactly the same as the area of the square off the hypotenuse! And if we introduce labels a, b, and c instead of numbers, they can derive the Pythagorean Theorem this way. I noticed that a lot of teachers teach the Pythagorean Theorem this way. There are a lot of visual gifs and videos showing that the areas of the squares coming off the triangle add up, but is that technically a proof? At this point, the students are actually very close to seeing a more algebraic proof by the time they get to that last bullet point!

All they would need to do is take the tilted square (c^2) and find the area with respect to labels a and b. 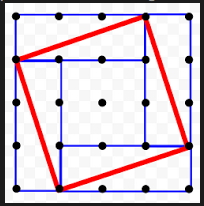 There's two ways to do this. The "inside" way and the "outside way". The inside way is adding up all the inside areas using labels a and b. The outside way is taking the outer box and subtracting off the corner triangles. Using real numbers, this isn't very difficult, but using a, b, and c as the numbers is a huge "cognitive leap" for these students. So at the end of the day, my question is: Should I be leading students through an actual proof of the Pythagorean Theorem? Or is an exploration of deriving the formula good enough?

I hope this all made sense! If not, I'll do my best to clear things up.

If you are in the United States, at a public school, then you should explain a proof because this is one of the common core state standards: http://www.corestandards.org/Math/Content/8/G/B/6/

I would suggest using the following proof: use a line perpendicular to the hypotenuse and passing through the vertex of the right angle. This divides the triangle into two similar right triangles. Using this similarity, one can prove the theorem.

This proof is somewhat preferable to others because it connects to the larger story of similarity, instead of being a one off proof.

Even if common core were not an issue, I think that mathematics is about making sense of patterns. Surely you should investigate, and notice the pattern first. Just noticing the pattern is not enough: math is not an experimental science. We should seek to understand why the pattern holds. So yes, we should try and find an explanation (a proof).

I think an important aspect of this question -- one that I don't think has been mentioned yet in the other answers -- is the verb "see", as in "Should my 8th grader see a proof". While "Explain a proof of the Pythagorean Theorem and its converse" is indeed one of the Common Core Standards (and thanks to Steven Gubkin for providing the link in his answer) it's important to notice that the Standards describe what students should be able to do, not what students should see the teacher do.

I mention this because it is common for teachers (at all levels!) to think that if we show student a proof, they now know the proof. I think that is a fallacy and a dramatic oversimplification of how students actually learn the skills of proof and reasoning. If you want your students to learn to prove the Pythagorean Theorem, you have to engage them in the activity of proving so that they construct the argument themselves. That requires scaffolding and careful planning that goes beyond the question of "What proof do I show?"

I think the usual visual proof of PT uses something like: 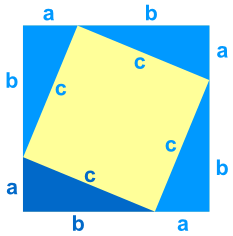 Make cardboard cutouts of the outer and inner squares and the 4 identical triangles. Fit them together as shown.

Comparing areas, you can obtain:

Getting rid of the brackets and cancelling 2ab from bothsides, you obtain as required:

Maybe one student in the class will "get it?" Might be worth it, though, to light a fire under that one student. Make it quick though. I would think that most students at that level won't get it no matter how long you take, but it may help them remember the formula if your presentation is sufficiently animated.

Actually the most 'intuitive' proof of the Pythagoras theorem involves cutting the big square into only 3 pieces and reassembling them into the two smaller squares (using merely translations). Absolutely no subtraction is involved! (See the last section below for why subtraction of area is a nontrivial issue.) 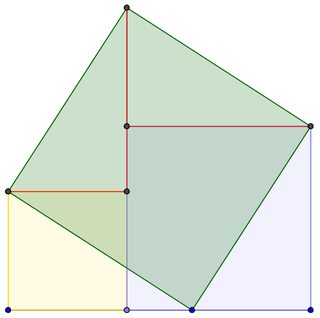 (Cut the green square along the red line and reassemble into the yellow and blue squares.)

Note that the proof is still not that simple. I think the easiest way is as follows. Start with the yellow and blue squares, then construct the point at the top and the 4th point at the bottom by translations of the appropriate points. Now use translations to prove that the green shape has equal sides, and use the four congruent triangles to prove that it has equal angles, and hence it is a square. The four congruent triangles also show that the area of the green square is the same as the total area of the yellow and blue squares.

All that is used here is scissors-congruency, which for polygons turns out to be equivalent to having the same area. (It is not equivalent for polytopes in general.) But what is area in the first place? In modern mathematics we could just use the Lebesgue measure, but arguably there is a more natural definition that extends the idea of scissors-congruency, which turns out to yield the Jordan measure and yet is not hard for a bright student to grasp.

(Remark: If we naively try to define that $A$ has area $x$ iff $R_x \precsim A \precsim R_x$, then it will non-trivially work for polygons but will even more non-trivially fail for the circle! That is why we have to relax the condition via the notion of limits.)

It is now easy to establish all the standard properties of area, except for one, namely that $R_x$ has area $y$ iff $x=y$. This property is essentially the same as the fact that if two shapes have the same area and we remove a region of the same shape from each then the two resulting shapes still have the same area. Since many proofs of the Pythagoras theorem use this fact, there is thus a legitimate reason to prefer a proof that does not use it.

For completeness, here is a sketch of a proof of that last property. Take any measurable shape $A$ that has area $x$. Then $x \le |A|$, by additivity and monotonicity of the Lebesgue measure since there is a finite partition of $R_x$ into measurable regions that fit within $A$ without any overlap. Hence $R_x$ cannot have area $y$ if $x < y$. Maybe this is cheating a bit, but I do not see an easier way.

A broader answer regarding the teaching of the Pythagorean Theorem (including the proof):

And an image from the proof - 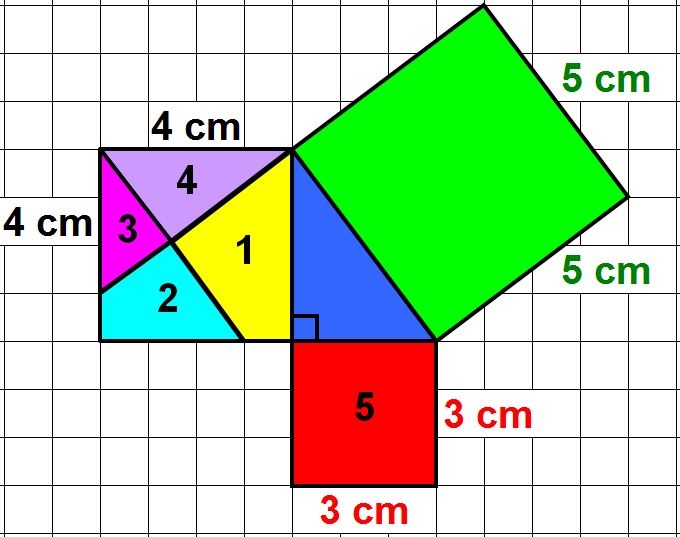 Not the answer you're looking for? Browse other questions tagged secondary-education proofs geometry or ask your own question.

6
Should one justify formulae in middle school?

13
How do I Introduce Converse Theorems in Class?
35
Why are triangles so prevalent in high school geometry?
27
Given a 3 4 5 triangle, how do you know that it is a right triangle?
9
Advice on Proof-based Math Topics for High Schoolers
13
What is currently called geometry in high school?
6
Group theory by geometry
6
What are strategies for teaching that the altitude of a right triangle creates two similar triangles?
12
How to teach the Pythagorean theorem in a satisfying way to high school students?
4
Can we define length and perpendicularity not via an inner product?