Definition of the term, equation

What is the definition of an equation (as a mathematical terminology)?

Could you share how you have learned about it and what is the definition of it?

Here are two definitions of an equation that I found:

(1) From Wikipedia: a statement of an equality containing one or more variables (this is the one I have learned.)

(2) From the text book that I am using: a statement that two quantities are equal. (this seems to be the one taught in elementary schools in Canada)

Your question is, in some sense, purely mathematical: What is "the" definition of an equation? You identify two different definitions, so I do not know if any single one of them can be claimed as canonical. Instead, here are some remarks about defining 'equation' from the perspective of the teaching and learning of mathematics.

The first name that comes to my mind around a question such as this (i.e., related to equations or equality) is Carolyn Kieran. For example, see:

Here is the first page: 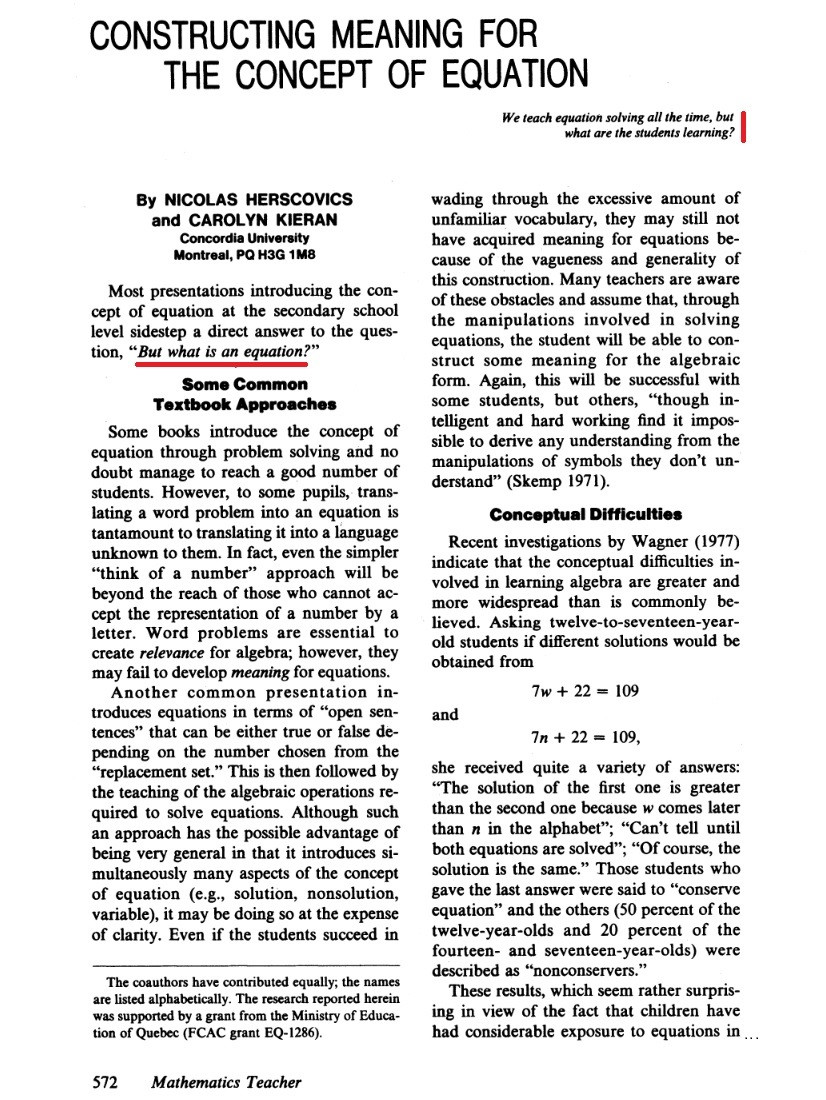 And here is the definition suggested, though you would need to read the full article to see what is meant by, e.g., arithmetic identity (although I think you could well guess it): 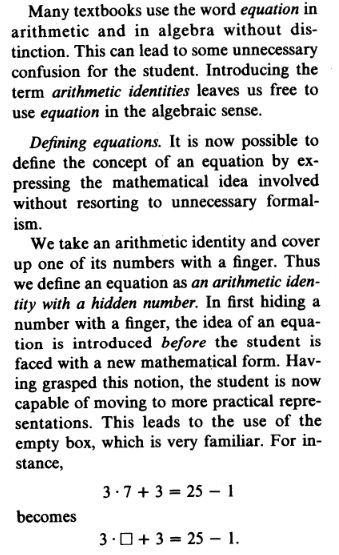 This is pretty much in keeping with, e.g., the Common Core State Standard 6.EE.B.5:

Probably it does not jibe so well with dictionary definitions; e.g., Merriam-Webster on equation:

I think that this is a pretty common definition (asserting that two expressions are equal) although the reference above distinguishes the two Merriam-Webster examples by referring to the former as an arithmetic identity and the latter as an equation.

It is also worth pointing out, as Herscovics and Kieran do later in the article, that the definition provided around hiding a number in an arithmetic identity leads only to equations that have solutions. Here are the related remarks, which concludes with their proposed "general definition of equation": 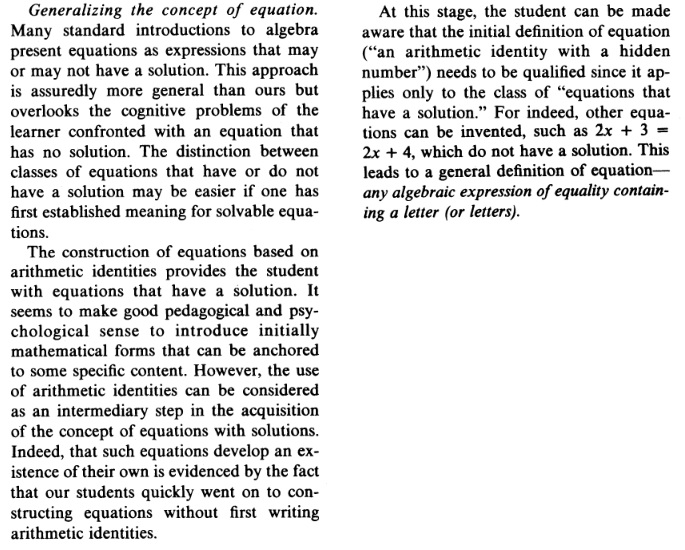 As a closing note, again from the mathematics education literature, here is one more related Kieran reference from around that time, although this one is specifically about $=$ as a symbol:

I'd say that an equation is a statement that two things are equal. This is slightly more general than Amy B's answer, since I don't insist that the statement be mathematical, and it's more general then the second definition in the question, since I don't insist that the two things be quantities. So for example, I consider $$\text{Andreas Blass}=\text{the author of this answer}$$ to be an equation. (It's not important that this particular equation is true; replace "Andreas Blass" with "Napoleon" and you still have an equation --- a false equation, but an equation nevertheless.)

In the special case where the equation contains one or more variables (as in the first definition in the question), the context, and in particular the meaning of the variables, can affect how the equation is to be understood.

Another common situation is that the variables are understood as universally quantified, so the intended meaning of the equation is that it's true for all values of the variables. For example, some people state the commutative law of multiplication as $xy=yx$, meaning $(\forall x)(\forall y)\,xy=yx$. Equations with this interpretation are what I'd call identities.

Having taught math in elementary school, I can assure you the second definition is correct.

According to Math Open Reference (and many other math sites)

Of course this definition includes equations with variables. It also includes:

This question is a great example of why you shouldn't rely on Wikipedia.

I believe there are different things we use the term 'equation' to mean over the course of education, and students can get confused because it's usually never explained where the distinctions come in.

At a simple level, an equation is any statement that two things are equal. It is a logical statement with a true/false value that uses 'equals' as the relation, rather than, say, less-than. It's worth remembering that 'equals' means different things in different contexts.

So then different things can happen. One option is that the logical statement is false, e.g. $2+1=5$. We don't use these that much in education, so students may well get confused unless it is made clear that they are being taught to evaluate rather than being taught facts.

Another option is that the statement is true, e.g. $2+1=3$ or $2x+x=3x$. We start teaching simpler forms of these at primary school, and since this is pretty much the only form around, 'equation' does the job, if needed at all.

The third option is that we have decided to assume that the equation is true by hypothesis, and wish to determine the consequences of that hypothesis, e.g. $2x+1=3$. We introduce these later as 'algebra'. Here students will see both cases: $2x+x=3x=5$. These are generally simple enough that they can distinguish between 'true' and 'true by hypothesis' without realising that there's a distinction. In this context we tend to use 'solve' to mean the action of determining the value(s) of the variable. But we also use 'solve' for questions that aren't obviously of this form, so students may not pick up the technical meaning.

After a bit, we start to introduce other statements like $\sin^2(x)+\cos^2(x)=1$, which are of the always-true type, but are not obviously so. We call these 'identities'. These are, in a sense, equations that 'cannot be solved' (more accurately, solving them would not yield much useful information about the value of the variable). Some students will not pick up this distinction, so 'identity' becomes a word they don't understand but think they should (and therefore possibly scary).

Along the way, we also introduce 'equations' with other relations, e.g. $2x\leq 3$. Since we typically use only a limited range of relations, and may not supply an alternative term, these might also get categorised as 'equations'. After all, basically the same methods are used to 'solve' them.

In addition, we bring in questions where the solution requires a sequence of logical statements rather than simply a sequence of equal expressions. Again, students may not notice the change, and come to think of '$=$' as meaning 'the next bit of the solution'. So 'equation' is no longer 'a statement with $=$'.

So then they reach university, and start getting picked up on these distinctions. Maybe they then start to catch on. Meanwhile, they meet definitions. And after a bit one might ask 'what is the definition of 'equation'?'.

Perhaps, then, the answer is partly that there isn't a single definition, because 'equation' is both a mathematical term but also a meta-mathematical term. That is, we use it to talk about doing maths, as well as about the content of maths. And education terms aren't that well suited to rigorous definitions.

"Equation" and "solve" are among the words most frequently thrown about promiscuously by people without understanding. They write things like "How can I solve this equation: $\sum_{n=0}^\infty r^n$?" (which is not an equation at all, and which admits evaluation rather than solution.)

An equation is an equality that has some solutions but of which not every number or function or other appropriate object is a solution. Thus $x^2 - 10x + 24 = 0$ is an equation of which $4$ and $6$ are solutions. And identity is an equality that is true of everything (every number or every function or every other appropriate object). For example, $\log(ab) = \log a + \log b$ or $\cos(a+b)=\cos a\sin b + \sin a \cos b$ or $(x+1)^2 = x^2+2x+1$ are identities. Both equations and identities are examples of equalities, which are statements that one thing equals another.

(In the field of typography, the word equation often means what illiterate laypersons think it means: anything written in mathematical notation.)

The Wikipedia definition seems very nonstandard in my experience (and also unnecessarily complicated). The definition with which I'm familiar, and which seems much simpler, is as follows:

We may then observe three subcategories of equations:

This is common usage throughout any college-level book for algebra or precalculus that I've seen. Some examples:

Moreover, it's common throughout those textbooks to take certain equations with variables, and manipulate it into a form without variables -- saying that the equations are equivalent, and thereby concluding that both the initial and final form are identities. A few examples of this:

In summary, the distinction between equations with and without variables is not followed by any college-level algebra textbook I've seen, and doing so would actually interrupt the reasoning by which one recognizes identities there.

When I was thinking about a similar question, I found the article "What is an equation" by S. Marcus and S.M. Watt ( https://www.academia.edu/3287674/What_is_an_Equation ) As far as I understand they discuss the difference between "equation" and "equality" in some languages. In some language (like english) there is no difference, but in others (like french) these two concepts are different.

As pointed out by @AmyB and @DanielRCollins, an equation is simply a statement that two expressions are equal.

@Adam remarks that the equation-identity distinction doesn't seem useful; on the contrary, it is instructive to distinguish an identity from a “contingent” equation:

A: Premises (1,2) are identities (which hold on the domain of the variable $z$), whereas premise (3) is an equation that's contingent on unknown (but particular) values of $z.$ A separate case $(z^3-1)=0$ necessarily branches out when dividing $(z^3-1)$ out of premise (3)—but not so when a similar division is performed on premises (1,2): conclusions (1,2) remain identities.

Not the answer you're looking for? Browse other questions tagged reference-request concept-motivation definitions equal-sign or ask your own question.

10
Term and reference for the problem of students “overassociating” concepts with each other
75
Issues with "equals", where does this come from and how do I combat it?
6
Apply the inverse operation on both sides, or know the inverse function?
7
What is an intercept?
9
Equality as "makes" vs equality as "equals"
8
Definitions of factors and terms
9
Definition of Trapezoid
12
Why should or shouldn't we teach functions to 15 year olds?