request for evidence about class perspectives in math word problems

A recent publication:
Anita Bright. Education for Whom? Word Problems as Carriers of Cultural Values. Taboo: The Journal of Culture and Education. (Spring 2016). pp. 6-22. Link No paywall.
observes that many textbook math word problems are from "middle or upper class perspectives". The first example word problem is:

Two art students are touring Paris. They each buy a one-day museum pass for \$14. Each student also buys a ticket to the Eiffel Tower for \$11 and a boat ticket for \$3. How much do the two students spend altogether? Explain.

From my reading of this paper, there is an implicit claim that these word problems (with middle or upper class perspectives) have a negative impact on the learning of some less-privileged students.
Is there evidence for this claim ?

The hard evidence could be a study similar to those in the answers to a similar question about gender. There could be comparisons of student performance on different variations of the same word problem, with the same math calculations but with different characters and situations.

The soft evidence could be anectodal, perhaps something like this:

Thank you for your replies.

Yes, there is evidence for the claim; for example, consult the following:

You will find in this piece that the authors, as you considered in your "soft evidence" proposal, modified mathematical questions (from the NAEP) and checked to see the impact on student understanding.

Here are two images; I will mark some relevant components in red.

The first image is of the title and abstract: 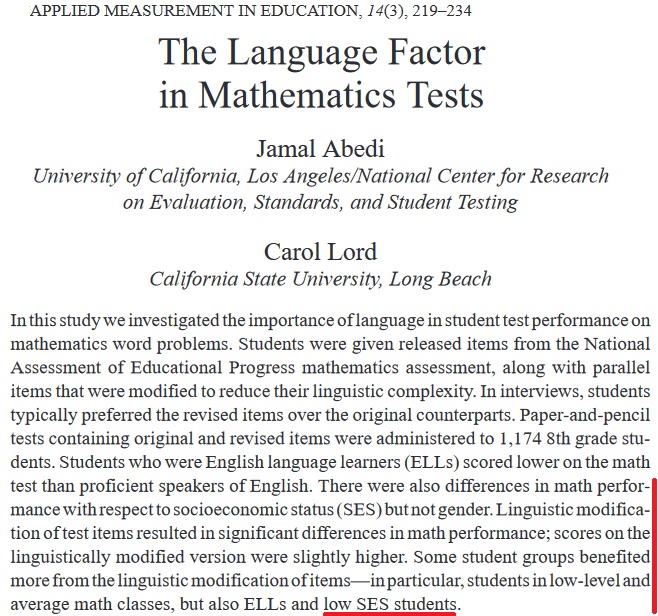 The second image is of the beginning of the Discussion section (PDF 13/17): 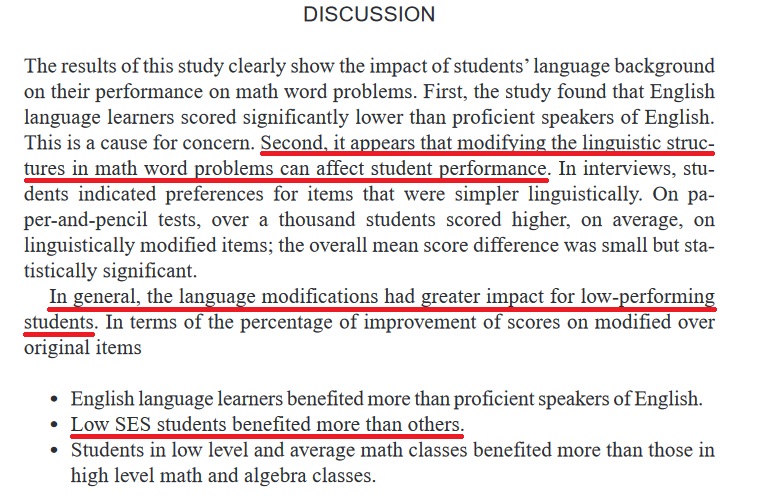 There are additional subtleties to answering your question; for example, consider the intersection of socioeconomic status and the language spoken by students at home, and you may see that ELLs (cf. bullet-point 1 above) are disproportionately low-SES.

The suggested article may have other references of interest; as far as subsequent articles that cited this piece, here is a link to google scholar's Cited by (with the results cut down by searching for the term "math"). I cannot think of a "seminal article" offhand that addresses your question (although there may well be one!) but I am quite confident (for scholarly and anecdotal reasons) that the answer is, yes, privilege (as measured e.g. by some SES metric) will be significant when looking at student performance on certain types of word problems.

I only have anecdotal evidence but since you said it was welcome, I am adding my 2 cents from both the perspective of a teacher and an item writer, hired to write questions for standardized tests.

I taught math to gifted elementary students. A small fraction of them were gifted in math and had reading levels below grade level. Students with poor reading levels often have poor vocabularies and have a harder time with unfamiliar words.

These students felt safe asking me about the meaning and context of all sorts of words that made no sense to them even on tests. Before I instituted this policy, these students did very poorly in word problems.

An older student or adult might be able to solve a problem without knowing all the words, but younger students get stuck on word meanings and can't seem to move on the problem until they can read it through and know the meaning of all the words.

I noticed in class that students were often stuck on multi-cultural names and words, such as unfamiliar foods. Names were a particular problem if there was a girl or a boy, because the student wouldn't know which was he or she.

When I wrote questions for my own students, I used their names and hobbies. I found this delighted them and piqued their interest. If a student needed a makeup assignment, I wrote 6 or 7 problems with just that student's name, which was always a hit.

From my experience language and context in word problems can motivate and delight students or frustrate them and put obstacles in their path.

First, the hard evidence is obvious -- our standardized mathematics assessments have continued to show a discrepancy between race and class. This should tell us there is something problematic about the assessment, however usually people who talk the test read this as problems with students.

Second, I feel Ben Dickman's suggestion is completely valid, however, for a different taste, you might want to check out these examples, and follow the larger threads you'll find within. There is a massive literature of critical mathematics education:

I began teaching math when SMSG just came in. I mention this for background only (and as a clue to my age!). Before this and to this time, I am sure, word problems were always the nemesis for students. I always suggested (and practiced) this philosophy.
"Word problems are easier to solve after you turn them into math. The problem is that you need to strip away the "garbage". As teachers you (and your students) should practice this and then you and they will not have to deal with PC (politically correct) and in the process will eliminate what may be perceived PC factors. With:

"Two art students are touring Paris. They each buy a one-day museum pass for \$14. Each student also buys a ticket to the Eiffel Tower for \$11 and a boat ticket for $3. How much do the two students spend altogether? Explain."

After reading this You might say, What is important (to the solution) about: "Two art students are touring Paris." Paris? Touring? students? 2? etc.. continue this and perhaps you/they get to the short version:

Not the answer you're looking for? Browse other questions tagged mathematical-pedagogy reference-request word-problems or ask your own question.

39
What does math education research know about difficulty vs. effectiveness?
28
Should word problems be reasonable?
8
Unable to solve word problems, fluent in arithmetic
12
Challenge questions for extremely bright kids
13
Explaining the phrase "in terms of"
15
Reference request for studies on gender in math examples, homework problems, or math exams
3
"Seeing" GCD and LCM in Word Problems
8
Don't these word problems seem designed to be confusing?
7
Do my students know elementary algebra; do they just use online calculators or external help; and is this ok?