I coach some talented high school students and would like to encourage them to pursue such problems and submit their work, earning recognition in the process.

It's been a while since I've checked it out, but I think the College Mathematics Journal has a section of problems like this. Yet, I wonder if that's the correct level. Do you know of other resources?

Crux Mathematicorum is one that specifically is aimed at this particular cohort. One particularly interesting feature is that some problems are in both French and English, since this is a Canadian journal.

Sometimes problems in Mathematics Magazine are appropriate, but usually Monthly ones are just too hard.

Finally, sometimes the Pi Mu Epsilon Journal has appropriate problems as well, though I am less familiar with that one and the website seems to be somewhat moribund.

First, you may consider the calendar problems in the Mathematics Teacher (link) which is published by the National Council of Teachers of Mathematics (NCTM). They also tweet some calendar problems that you could check out for free (twitter). Although they do not actively solicit student submissions for publication, I think that talented high school students could actually consider publishing articles in the journal if they have ideas about particular problems. Specifically, these mathematical explorations might be appropriate for the Delving Deeper section of the journal, possibly with your assistance (the journal actively seeks writers who are practitioners i.e. math teachers!).

Second, and more directly in response to your query, is the Mathematical Association of America's (MAA) Math Horizons (link), which includes a section in each issue called The Playground for which students can have their answers, as well as their problems, published. They will credit students who submit correct answers by name; in my experience, they are also quite receptive to problem proposals. I've put two into their issues; one of these problems was gamefied by PlayWithYourMath.com into a worksheet (pdf); the other problem I put in was back in 2012: 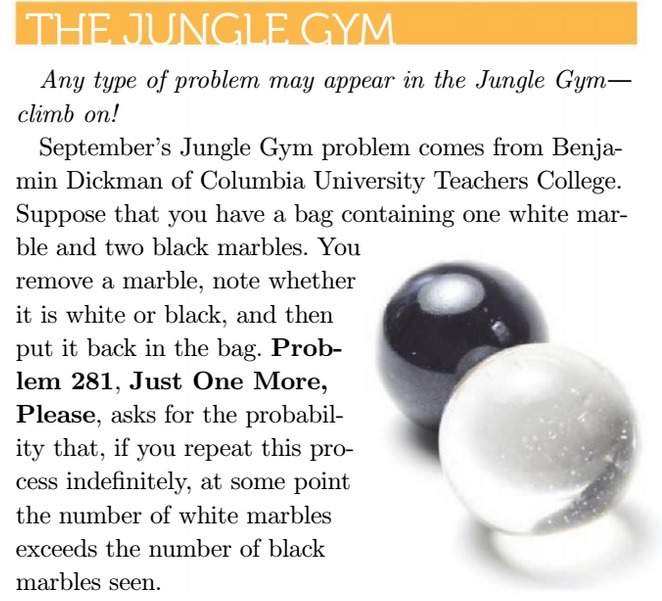 You can see from the image above that "any type of problem may appear in the Jungle Gym" (one of the problem sections in The Playground) — the solution that I sent in along with this proposal used Catalan numbers, which is outside most high school curricula but was related to an article in that same issue of Math Horizons. My own belief is that fostering creativity through problem posing is just as important as (or perhaps even more important than!) problem solving.

As a non-journal recommendation, 538 has a weekly puzzle section called The Riddler (link). The one (minor) gripe that I have with these posts is that they are not well-sourced. For example, The Picky Eater is Putnam 89/B1 (link) and its extra credit modified to an equilateral triangle was asked in MSE 1688936. Offhand, I also recall Misanthropic Neighbors having a somewhat storied history beginning (as far as I know) with SIAM 62-3 (1964; JSTOR) and continuing with work by D Knuth.

Not the answer you're looking for? Browse other questions tagged reference-request or ask your own question.

14
What experimental studies have been done on the Kumon method of teaching and learning mathematics?
10
References for "high-school mathematics from an advanced point of view"
16
The general and particular in the psychology of mathematics education
7
Native language, writing, and mathematical problem solving
13
Resources for high school teachers about APOS theory
6
Is there any high school level summer program that teaches Analysis?
3
Books similar to "Teaching Developmentally", but for high school math
5
Are there any more mathematical journals or websites with the "problems and solutions"?