In analytic geometry, an asymptote of a curve is a line such that the distance between the curve and the line approaches zero as they tend to infinity. Some sources include the requirement that the curve may not cross the line infinitely often, but this is unusual for modern authors.

And for most examples, such as $y=1/x$, it seems clear what's going on, and how to discuss the asymptote. Yesterday, a student asked me about this function -

Only after I told her it was a discontinuous function, and when drawing it, be certain to show that at x=0, both lines should be an open circle indicating "not a point", did she tell me the teacher said that $y=1$ and $y=-1$ were asymptotes. I think there's a mistake here as there's nothing approaching the lines, the lines are the equation. Just as a first order binomial, $y=x+2$, is just a line, no asymptotes there. 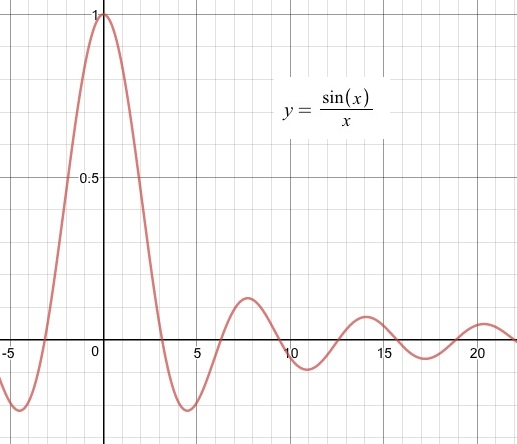 And the question of whether today's usage allows crossing to occur. In this example, the distance itself, from first definition, will cross zero, infinitely many times. Looking at the quoted definition, what does "modern authors" mean? Do I need to be concerned that an older book will call the X axis of second graph "Not Asymptote", but a newer one is fine?

calculus graphing
Share
Improve this question
edited May 7 '18 at 22:07

Personally, I do not see the problem with intercepting any amount of times. If you wish to modify the definition of an asymptote to fit this, I would probably use limit superior and limit inferior.

Also, while you are dealing with the more geometric asymptotes, there are also asymptotes that are more "functional" (as I would put it) in the fields of "Asymptotic Analysis", "Asymptotic Theory", along with the concept of "Big 'O' Notation". Such things allow different meanings to "asymptote", for example:

A famous example of when the above does not agree with our original definition of asymptote is "Stirling's Approximation:

all this is really saying is that the rational function has a dominant $x^3$ growth/behavior, and the rest of the behavior is of $x^2$ order or less. This can quickly help determine the behavior of extremely complicated functions by extracting the dominant behavior of a function for either limits or approximations, etc.

Mathematically a horizontal line is asymptotic to itself. So for example the horizontal asymptote of the constant function $f(x)=3$ is the line $y=3$.

This issue of whether the definition of a horizontal asymptote should place some sort of restriction on the graph of $y=f(x)$ crossing a horizontal asymptote seems to come up frequently. As a mathematician this seems peculiar, and has always puzzled me. I suspect the root of this resides in the etymology of the word "asymptote" which traces back to something like "not together." Thinking about the etymology in this way might tempt one to think that the mathematical definition of an asymptote perhaps should include some restriction to rule out the notion of a line being asymptotic to itself. But it should not and does not.

What we have here is just a peculiar and interesting drift over time from the etymological meaning of a word to a meaning and usage that is quite different.

I don't think that a horizontal line being asymptotic to itself is a "trick question we just never really run into" (as you suggest in the comments). Probability theory gives a natural context in which this sort of thing occurs (albeit in a way which is more than just a horizontal line). A standard result is that a continuous function $F$ defined on $(-\infty, \infty)$ is a cumulative distribution function of a continuous random variable if and only if it is monotone increasing and is asymptotic to $0$ as it approaches $-\infty$ and $1$ as it approaches $\infty$. For some distributions (e.g. a normal distribution) these are asymptotes as you typically think of them -- you approach $0$ or $1$ but never get there for any finite value. On the other hand, if the distribution is for a random variable with bounded support then the asymptotes $0$ and $1$ will be achieved long before $\pm \infty$. For example, the graph of the cdf of the standard uniform variable on $[0,1]$ looks like

Most of the graph consists of horizontal lines which are equal to the asymptotic values. I don't see any reason to consider this a counterexample to the claim that cumulative distribution functions are always asymptotic to $0$ and $1$.

Not the answer you're looking for? Browse other questions tagged calculus graphing or ask your own question.