I’m looking for books of a general interest in maths, like a maths novel, a fun book about maths, a humorous introduction to higher concepts, something outside of tests, something they can read on their free time and appreciate the beauty of mathematics.

Let me add more details. I’m working as a TA for the course ‘’Maths and Physics’’ at a university college. The students have chosen the direction of environmental sciences. They basically have only two courses of maths in the entire bachelor program and no physics. They come from different backgrounds, but the majority of them has done some high school mathematics (not deeply) and a very elementary course in statistics. During the one semester course we will cover stuff from precalculus (functions, trigonometry, logarithms, etc.), stuff from introductory calculus (limits, derivatives, integrals), and then vectors and finally physics. Also the lecturer has been introducing them to number theory ideas (pigeonhole principle, golden ratio, induction).

My job is primarily to solve the exercises the lecturer gives them once a week and answer as many of their questions as time permits. I’m not satisfied with only that so I want to make them more interested in maths and eventually physics. Most of them won’t use maths again in another course in their program. So, now you have the whole picture, how can I peak their interest?

For example, one of my students is interested in the philosophy of maths. I have already given him an introductory article about the incompleteness theorem and another one about the ‘’Unreasonable effectiveness of mathematics’’ by Wigner. Do you have any further suggestions?

Concerning all the students it doesn’t have to be only books, any resource in general would be fine. But, maybe they can appreciate books more easily? I was thinking about a book introducing them to the why’s of mathematics or maybe some higher ideas (in an introductory level), or why not maths literature, perhaps a maths novel, a comic about mathematics? What are your ideas?

I'll suggest the book Flatland by Edwin A. Abbott. It's an interesting read about geometry and thinking in a higher dimension.

The downside is that this book is, well, antiquated to put it nicely. Among other things, only men get to be polygons; women are just line-segments.

The Number Devil: A Mathematical Journey by Hans Magnus Enzensberger is an essential in the "fun math book" category. Very accessible, great illustrations and actually touches on pretty sophisticated concepts such as limits and infinity. Very highly recommend this book.

Hyperspace: A Scientific Odyssey Through Parallel Universes, Time Warps, and the 10th Dimension, by Michio Kaku. A little long to be light reading, but I love the chapters at the beginning discussing society's fascination with the fourth dimension, and the story behind the acceptance of dimensions higher than three in the math community. In my experience, undergraduates don't believe or never considered that mathematicians every really fought over these ideas.

I would recommend this movie version of Flatland. It can be shown in a single class period, with time to spare for some discussion.

Permit me a possibly unusual recommendation:

Most of the action takes place in Europe in the 16th and 17th centuries. A central focus is how (and why) the Jesuits were so adamantly opposed to infinitesimals, and how their success hampered Italian mathematics. The book is more history, politics, and philosophy than math, but it is very well-researched and I found it an engaging read. 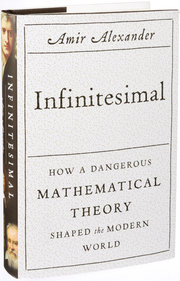 Not the answer you're looking for? Browse other questions tagged undergraduate-education mathematics-in-daily-life recreational-learning or ask your own question.