What is accelerated developmental math education, and is it a good idea?

I teach physics and math at a community college in California. I got in a politically tinged discussion with a colleague today in which I claimed that one of socialism's weaknesses was its historical unwillingness to throw failed programs in the trash, and I challenged him to name a single positive educational reform that had occurred within our lifetimes in American community colleges and had spread and taken root. Annoyingly, he was able to come up with an example, which was accelerated developmental math education.

I hadn't known until today that such a thing existed, and it doesn't yet exist at my school. I'm still hazy on what it is.

What exactly is accelerated developmental math education? How does it work, and is it a good idea?

Accelerated developmental education includes a variety of mechanisms to shorten time students spend in remediation. It can include: Batching together multiple courses of remediation in one semester (say: 6 or 9 credits in one semester), likely with "supports" such as tutors and learning communities; batching together remediation in simultaneous credit-bearing courses (e.g., a 6 credit combined remedial algebra and statistics course); giving short workshops of a few days and then re-taking placement tests in basic skills; or possibly simply eliminating remedial courses altogether.

The motivation is based on the observation that students assigned to remediation are likely to fail and drop out of school -- and an interpretation that anything that minimizes or eliminates remediation is a good thing (i.e., keeps students in school, keeps them attending other courses, increases total credits and chance of graduation). One point that proponents of acceleration like to make is that some percentage of students who pass a remedial course still drop out before the next math course in the sequence (I've seen 20% thrown around as an estimate; "life happens" is a common attribution).

They cite several findings that accelerated remediation leads to increased percentages of students who pass credit-bearing English and Math courses, for example: 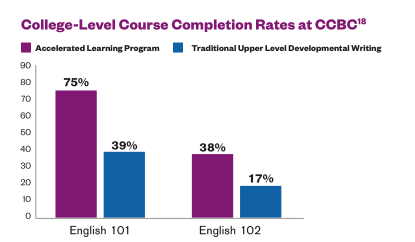 Critics would include Scherer and Anson in "Community Colleges and the Access Effect" (Palgrave Macmillan, 2014). In chapter 1 they make the point that thinking on remediation has made something of a full circle: in the 60's-70's larger number of students were entering unprepared and failing college-level math courses (under a "'Right to fail' philosophy"); the 80's-90's saw the blossoming of remedial education to address these student's needs; and the 00's-10's are seeing a backlash against remediation. In chapter 3 they write of developmental education:

Enemy. Gated. Broken. Brick wall. Dysfunctional. Disaster. Bridge to nowhere. Burial ground. Senior research analyst for the U.S. Department of Education Clifford Adelman ultimately tied the divisive rhetoric to blind allegiance to the completion agenda and explained that, “As a consequence, what often pours out are scare stories that make for good press and bad policy. The bad data-driven scare story, in fact, has become the preferred narrative.” Developmental education has been especially painted with the broad brush of failure by completion guardians who believe that maintaining open admissions at our nation’s community colleges and freeing low-skilled students from assignment to developmental education constitutes sensible completion strategy. Implicit in the arguments of developmental education critics are many false assumptions, chief among them that most students currently enrolled in developmental education would be much better served by enrolling in college-level coursework with embedded support.

That assumption, prompted by the realization that life events have a greater chance of derailing completion the longer a student remains in college, has led some completion advocates to herald the “strategy” of racing low-skilled students through higher education as an acceptable way to increase American postsecondary credential award...

Using the example of someone pursuing “a two-year nursing certificate,” Bill Gates declared, “We owe it to every American to make it pretty darn easy for them to get through that system.”

(I will point out that the Gates Foundation is one of the primary sponsors of education reform today; note that they funded the CCRC report quoted above.)

As one example, the CCRC report provides a pretty good road map for changes to remediation that have occurred at CUNY in the past few years. Institutional autonomy on the issue has been largely sidestepped in favor of central system planning. Students universally taking placement tests for basic arithmetic skills was eliminated a few years back. Most recently, the requirement that all students pass basic writing and algebra tests before graduating has been removed. A new central requirement is that non-STEM majors be provided with a credit-bearing math course sans algebra prerequisite. The expectation is that graduation rates will rise as a result.

My sense is that it is a good idea. I will come back later to write a more complete answer, but much of what I will say can be found at the website of the California Acceleration Project.

Not the answer you're looking for? Browse other questions tagged community-colleges remedial-courses or ask your own question.

28
What is the evidence about the effectiveness of remediation in math?
3
Good Textbook for combined Beginning and Intermediate Algebra Course