I guess complex numbers also won't be discussed in high schools in other countries and are simply neglected and never mentioned. However, I think it is important to at least let students know that complex numbers exist. I know that discussing complex numbers in full detail would require a lot of time which is often not available. Yet, without ever mentioning complex numbers, a teacher is leaving out an important piece of information. For example, when students are learning to find roots of polynomials they will usually be searching for them in the "wrong" set ($\mathbb{R}$). Very often examples are picked where a polynomial will have only real roots which guarantees the teacher to avoid the complex numbers. However, I think that it is also important to make students aware that things might not always be as easy as in the examples picked by the teacher and that a polynomial might very well have complex roots. The fundamental theorem of algebra, for example, is a theorem which is very easy to state and to discuss in school. The theorem will require some knowledge about the existence of complex numbers, yet, I think it is well worth discussing in high school: as the theorem's name suggests: it is fundamental to algebra.

What are your thoughts about the topic? Should complex numbers be discussed in high school? Or are there even countries where they are part of the curriculum?

Although there is a tradition in the U.S. of nominal mention of complex numbers in the high school curriculum, in my observation it is invariably superficial, and complex numbers are not mentioned subsequently. In particular, there is no mention of Euler's identity expressing sine and cosine in terms of complex exponentials, and, therefore, no mention of the palpable fact that all trig identities are deducible "by algebra" from properties of the exponential function (which itself is not treated in any way that would allow understanding of Euler's identity, unfortunately).

Since high schools in the U.S. do not mention solvability of cubics in radicals, there will be no mention of the "irreducible case", where the discriminant is complex, despite there being three real roots. So the quadratic story can easily be dismissed (in the minds of the students, as in the minds of many over the centuries) by saying that in some cases there simply "are no roots" (meaning no real roots).

That is, both in my direct recollection from decades ago, and from observation in more recent times, kids in high school are not led to take complex numbers seriously, but only to view them as yet one more menu-item on the laundry list... Sort of an "option", or something that might be on the final, ... but is not genuine or manifest in the world.

In fact, mathematics grad students at my R1 university tend to default into a similar attitude, that "complex analysis" is just a pre-specialty thing that presents a hurdle to them, for who-knows-what reason, but is not relevant to much of anything. This is dismaying... as are many things to cranky old people, I guess! :)

In the United States, complex numbers are a standard part of the typical high school Algebra 2 course. Students (normally in grades 10 or 11, corresponding approximately to ages 15-17) learn to add, multiply, and divide complex numbers; to solve quadratic equations with no real roots; and to find all $n$ roots of an $n$th degree polynomial (usually, carefully chosen so that the rational roots theorem gets you most of the way, and the quadratic formula gets you the rest of the way). They also learn the statement of the Fundamental Theorem of Algebra. The next year, if they continue on to a Precalculus course, they typically also learn the representation of complex numbers as points in a plane.

Complex numbers are also taught in China. I observed a mathematics classroom in Nanjing, Jiangsu Province, China in 2008-09 for students in their penultimate year of secondary school (their high schools have 3 years, whereas U.S. high schools have 4 years) and the end of the book discussed complex numbers. This was a standard public school in a second-tier Chinese city.

The specific book they used, in case you want to track down a physical copy, was the 2005 edition of:

(The remaining parts are my own translations.)

Section 3 is entitled, Generalizing Number Systems and an Introduction to Complex Numbers.

Below are three pictures from the textbook (of which I have a copy). The first is of the introduction; the second is of four sample problems (that I will translate); and the third is a fleeting mention of Euler's Identity (which paul garrett laments is lacking from many US secondary classes). 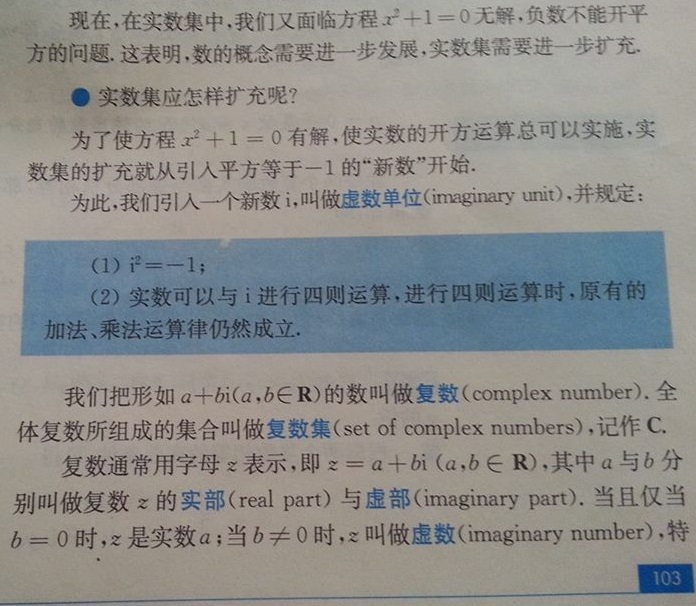 (Translation errors my own!)

These are essentially historical notes (the chapter begins with a quotation from Leibniz and a mention of Cardano) and do not have corresponding problems. I am not sure whether Euler's Identity would be pursued in the students' next, and last, year of secondary school mathematics.

In Norway, it's part of the curriculum for the optional high school course "Matematikk X", together with some elementary number theory and probability with continuous distributions (especially the normal distribution). Unfortunately, it's not a course many take, since if you do, it will still come on top of the normal mths courses, and most people who take math prioritize physics and chem

In Italy complex numbers are commonly taught in science and technically oriented high schools, like the liceo scientifico or the various types of technical institutes (e.g., on electronics, electrotechnics, etc.).

For the technical institutes, the teaching of complex numbers if fundamental for the understanding of circuit theory in the AC regime (phasors).

Complex numbers are usually taught during the 3rd year (16-year old students), and common topics are:

Here is a screenshot from the 11th grade textbook Chapter 6 in India. Sometimes complex numbers are also needed for some physics problems so students actually needed to know complex numbers a little earlier.

In my opinion, the syllabus has been simplified and math reduced compared to when I was a student. The following topics are included in the CBSE class XI syllabus quoted from here: 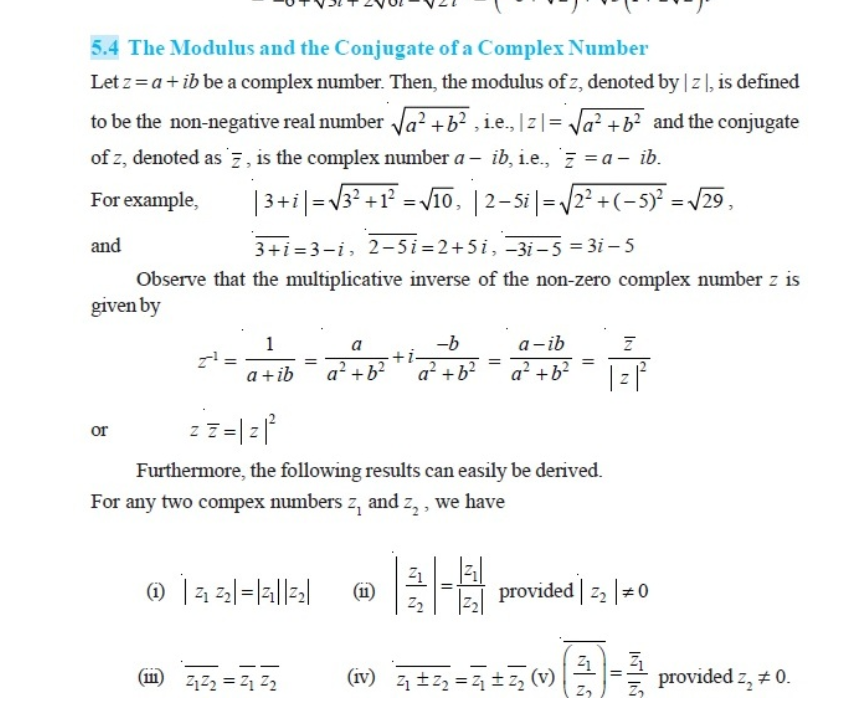 Based on this knowledge, students appear in entrance examinations for engineering colleges roughly after two years of learning above. The following is a sample question that they must answer in less than a minute. 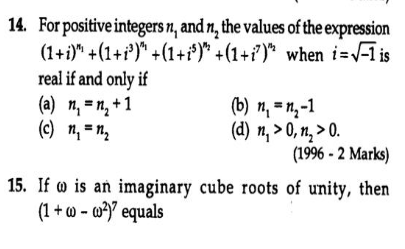 In most Israeli high schools, mathematics can be taken on one of 3 levels. The highest level, known as "5 units" and taken by about 10% of students in the country (generally those planning a career in science/engineering) includes the topic of complex numbers.

These students are then tested on complex numbers in the matriculation exam (bagrut), but the questions are usually quite easy (compared to the other topics on the exam), requiring not much beyond addition and multiplication of such numbers, and being able to convert between the rectangular and polar forms with a bit of algebra and trigonometry.

For example, the 2016 summer bagrut (807 questionnaire) includes the following section (comprising a sixth of the questionnaire's total marks):

I am a computer engineering student from Egypt.

In Egypt, you choose first what branch you want to study in the high school: maths, science (biology), or arts (history, philosophy, etc). Complex numbers are taught to 3rd year math students (the year just before the university). You choose this branch only if want to study engineering, computer science, mathematics, etc.

As an engineering student, I find complex numbers very important. They're used in engineering maths and physics. They're heavily used in, for example, AC circuit analysis, and Control theory. Fourier series and transform are used a lot in signal processing courses.

Complex numbers are a must for many engineering departments.

In the United Kingdom complex numbers are taught to pupils who stay in school from age 16 to 18 to do their GCE A or AS levels in maths. This may help: https://www.heacademy.ac.uk/system/files/pre-university-maths-guide.pdf

I'm a college student in China. As Benjamin has mentioned, complex numbers are taught in China. But in a rather implicit way.We are taught that they exit, but we don't have enough background knowledge to understand the reason of introducing such an weird "i"...lol.What we're taught is to do the calculation as accurate as possible as well as understanding and using the geometric property of the complex plane which is frequently associated with vectors.

What I'm trying to state is that it's hardly possible to dipict an explicit picture of complex numbers to senior high students.Think about this question: If you just tell them that for some practical reasons, we have to define an i as the sqrt of -1,what if they ask you why we can't define a number which yield 1 when it's multiplied by 0?How will you answer that question?Such thing did happen,and as far as I am concerned,the teacher simply can't answer that question.In fact it's not until that I went to college that I know the answer to that using abstract algebra.

So there're some problems when you introduce such a weird thing to students,especially curious ones.My point is:It's good to introduce it,but we have to figure out a better way to define it well.

23
Ideas for high school pure maths projects
21
Are there disadvantages to teaching complex numbers as purely geometrical objects?
9
What topic could I cover in an optional course at high school taking two lessons a week during a whole semester?
13
High-school level algebra textbooks for gifted students
14
How the real numbers are taught?
8
Convincing a high schooler that $i$ is a number
37
Why do we teach complex numbers?
15
Would a 1990's educated person need additional content knowledge to tutor high school mathematics today?
16
(How) Do American undergraduate math programs teach complex numbers?
20
Why do we teach the Rational Root Theorem? (high school algebra 2)