topics for an undergraduate Math seminar

What are some good topics for an undergraduate Math seminar?

I am looking for topics which are:

Not all of the above points are required, but as long as it satisfies most of the above it should be relevant. Above all else, if you think it is a good topic idea please share it.

Edit: If you have books or resources for the seminar topic, that is also very helpful.

We run a weekly seminar at my university where undergrads give math talks to other undergrads. To encourage people to give talks we collected a list of suggested topics which may be useful to you -- https://uwseminars.com/potential-topics/

EDIT: As suggested by Joel, I'll add a few of my favourite ones from the list (there are 83 topics now, but the number will increase this term).

3) Penrose tilings (and possible connections to the dynamics of tiling): Example reference: https://people.maths.ox.ac.uk/ritter/masterclasses.html, Miles of Tiles by Charles Radin

I'm sorry for the slant towards some topics but there's a "tag" option on the webpage which allows you to see topics by area.

(1) I am shocked that no one has mentioned the so-called Monty Hall problem/paradox. :)

(2) The point that "probability" does not directly describe "randomness", e.g., although the sequence of heads-tails HHHHHHHHHH seems "unlikely/not-random", it has the same probability ($2^{-10}$) as "random-seeming" sequences such as HHTHTTTHHT.

(4) Using linear algebra of 2x2 matrices to get the formula for the $n$th Fibonnaci number.

(5) Liouville's theorem (really just a corollary of the mean value theorem!) that an irrational real number that "can be approximated too well" by rationals must be transcendental.

Almost any chapter of this wonderful book could serve as a seminar topic. Each chapter is pretty much self-contained. 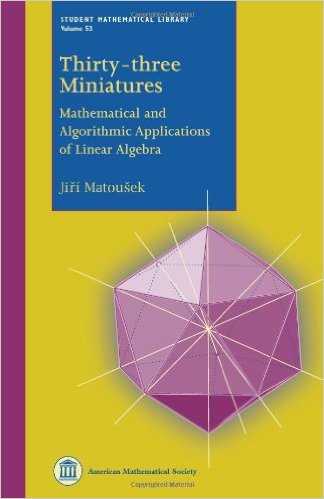 Here are three books I have used in various ways for such a course, focused on mathematics history.

Any book by Eli Maor is also definitely game. Again, supplementing for higher levels - but there is a surprising amount that they won't know! So much math, so little time.

How about a talk on the continuum hypothesis (CH) and related topics? It's a fascinating subject and can be tailored for basically any level depending on how detailed you get.

Full disclosure, I'm biased because I gave such a talk aimed at MS students and upper-level undergrads on this topic almost 9 years ago. And I think this meets all four of your criteria listed as of the time I write this, since they're very similar to what I was trying to do. Here's an outline of my presentation as best as I can remember it; feel free to draw from it as you wish:

This question in the last bullet point above is the perfect way to bring up the CH (since the question is basically, "Is the continuum hypothesis false?"). And what's interesting about the CH is the answer is independent of ZFC set theory, meaning we can take the answer to be "yes" or "no" and either way we won't get a contradiction in ZFC set theory. We know this from work done independently by Kurt Gödel and Paul Cohen.

I think there were some slightly related topics and/or generalities I discussed, such as cardinal numbers and transfiniteness, etc. It's been too long to say for sure.

This was my main reference:

EDIT: Another idea for a talk is how linear algebra can be used to determine solvability of a lights out game. A good starting resource is this site on Wolfram MathWorld. I expanded on it in this post on Puzzling.SE. I'm sure the paper referenced in that Wiki article would also be a good resource.

Personally I would discuss Graph theory, in a diverse and conceptual way with a few deeper dives. Students of that level should be familiar of weighted graphs, have an intuition for the size of functions (which could be leveraged in a discussion of travelling salesman, big O notation, how quickly networks can grow, Ramsey Theory R(3,3), chromatic polynomials, etc). There is so much novelty in graph theory, and it draws many areas of maths together in novel ways.

At a minimum, I'd include Erdös Renyi Random Graph models, and the emergance of a large connected cluster. It is an accessible mention of asymptoic analysis, simple graph enumeration, and probability distributions(as the edges per node modelled via Poisson is appreciably different to edges as randomly selected pairs of nodes).

Depends on time and how quickly you move through content, but you could try to mention dynamical systems, such as predator-prey models, and how graph theory can be applied in the spread of diseases and informtion.

I think this topic is well suited, because it is an example of three important chracteristics of matha: Interconnected, Rich in application, and the sheer enormity of open problems. E.g. P=NP, Graph Homomorphism, Ramsey (5,5,), etc.

At 2nd year ans above, it is likely many already have heard of Monty Hall,C Cardinal Infinities, and Mandelbrot(although this could be included if you hedge your bet with a split between dynamical systems and graph theorg).

Many fine probability topics could be suitable, depending on background and interest. A few such topics:

5: Matrices: The Perron-Frobenius theorem for nonnegative matrices, with application "the Google matrix"
6: Simulation: Some examples of mcmc ...
7: Error-correcting codes ...

If these are not present in course work:

Really most graduate math classes condensed into a best-of talk without proofs can be very interesting. Also, this might serve to motivate students to take such classes if that is an option

( or for non-graduate math possessing institution, such talks can help give students a better sense of the big world of math beyond the core course work. Naturally,attending a JMM or similar math meet is even better in this regard )

Basic topological ideas and knot theory are surprisingly accesible because they treat objects concretely representable in three space, via planar diagrams, and via actual physical models. (Basic ideas like isotopy can be illustrated with computer generated simulations.) Combinatorial methods in knot theory (knot polynomials, grid diagrams) can be learned and used without understanding their (sometimes quite deep) topological content. Students who know a bit of group theory can be shown connections with the braid group. There are numerous popular and undergraduate level accounts of knot theory, and most are full of examples that could be adapted to a classroom presentation.

Linear optimization as used in oil refineries (or even midstream movements and trading).

Anything dealing with statistics in business.

Additional to the above:

molecular or crystallographic symmetries. (BTW, if you approach it from the chemical or visual standpoint, rather than abstract algebra, it will be easier to understand and more interesting/applied.)

And another (more fluffy, but fun) is the fourth dimension in art: https://en.wikipedia.org/wiki/Fourth_dimension_in_art

Bottom line, keep it fun. DON'T be afraid to be relevant or to have some non pure math in there. You are not trying to teach a course in a seminar. You are trying to get some interest, that maybe pays of later.

Not the answer you're looking for? Browse other questions tagged undergraduate-education presentation seminar or ask your own question.