But what is the best way to help students realize that

remains true when you have the additional assumption of the event $B$ occuring. To be clear; I understand why this is so, I am just afraid of my explanation being too technical.

If your mother gives you a candy, either you will eat it or you won't. Sure thing.

The key lies in reiterating the definition of probability as $$\frac{\rm favorable {\ } cases}{\rm possible {\ } cases}$$ The conditional probabilities are computed with less possible cases.

For example, say we roll two dice, one after the other (so we can differentiate them), and consider the following statements:

A: "The second die is bigger than or equal to the first"

But the conditional probabilities $P(A|B)$ and $P(A^c|B)$ only consider as possible those cases in which $B$ occurred, namely 5. Of these (and only these) cases, 3 are favorable to statement $A$, and 2 to its negation.

You can realize probability as the relative area between a figure and an interesting part of that figure.

For instance, if you have a calendar of last year, and you marked all the days where it rained in blue, the probability during the year that it will rain is defined as the number of blue days to the number of days total

But different months rain different amounts. If we look only at the month of April, likely more will be blue that month than on any other month.

Conditional probability here would be linked to looking only at the month of April.

Here is another way to look at this.

is also a logical tautology, and corresponds to

In my opinion, this can be explained in 2 ways : 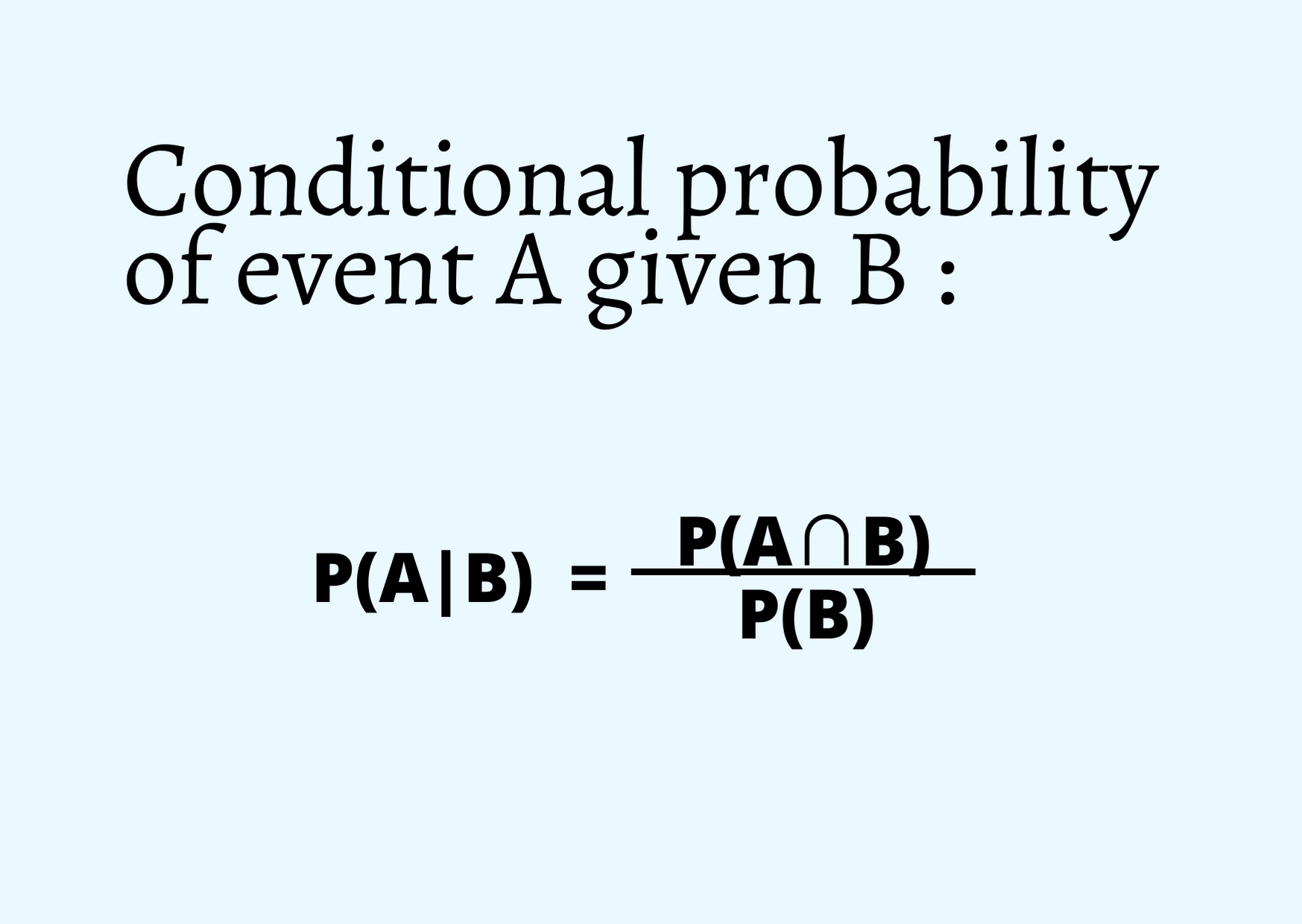 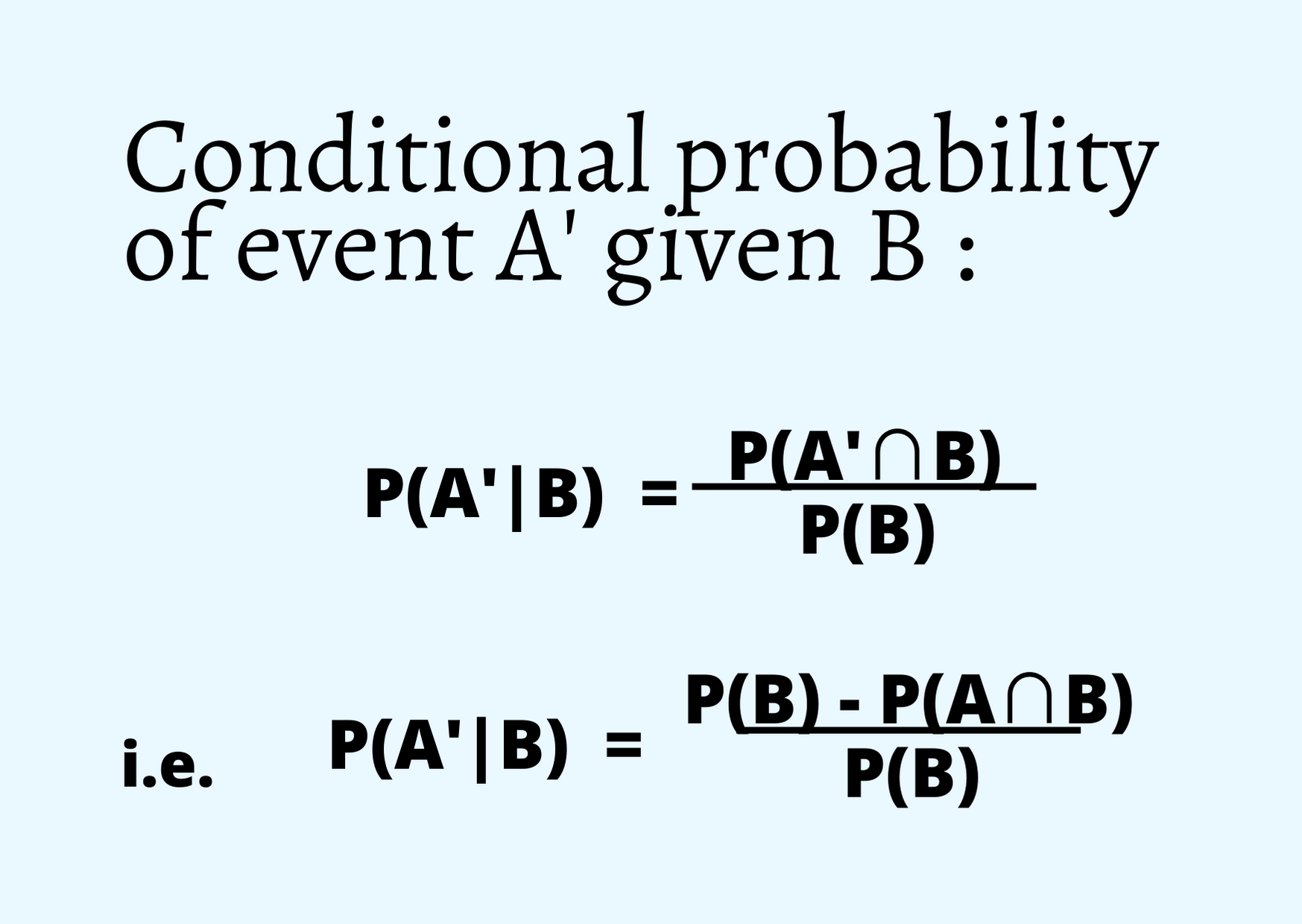 We took $P(A'∩B)= P(B) - P(A∩B)$ it the above step. But why? Because $P(A'∩B)$ is the dark gray region in the below Venn diagram [the region is an intersection of A' and B]. We could compute that region by subtracting $P(A∩B)$ from $P(B)$ We subtract $P(A∩B)$ because the compliment of $P(A')$ is every element of sample space without $P(A)$ and the intersection of $P(A')$ with $P(B)$ will give the shaded region. 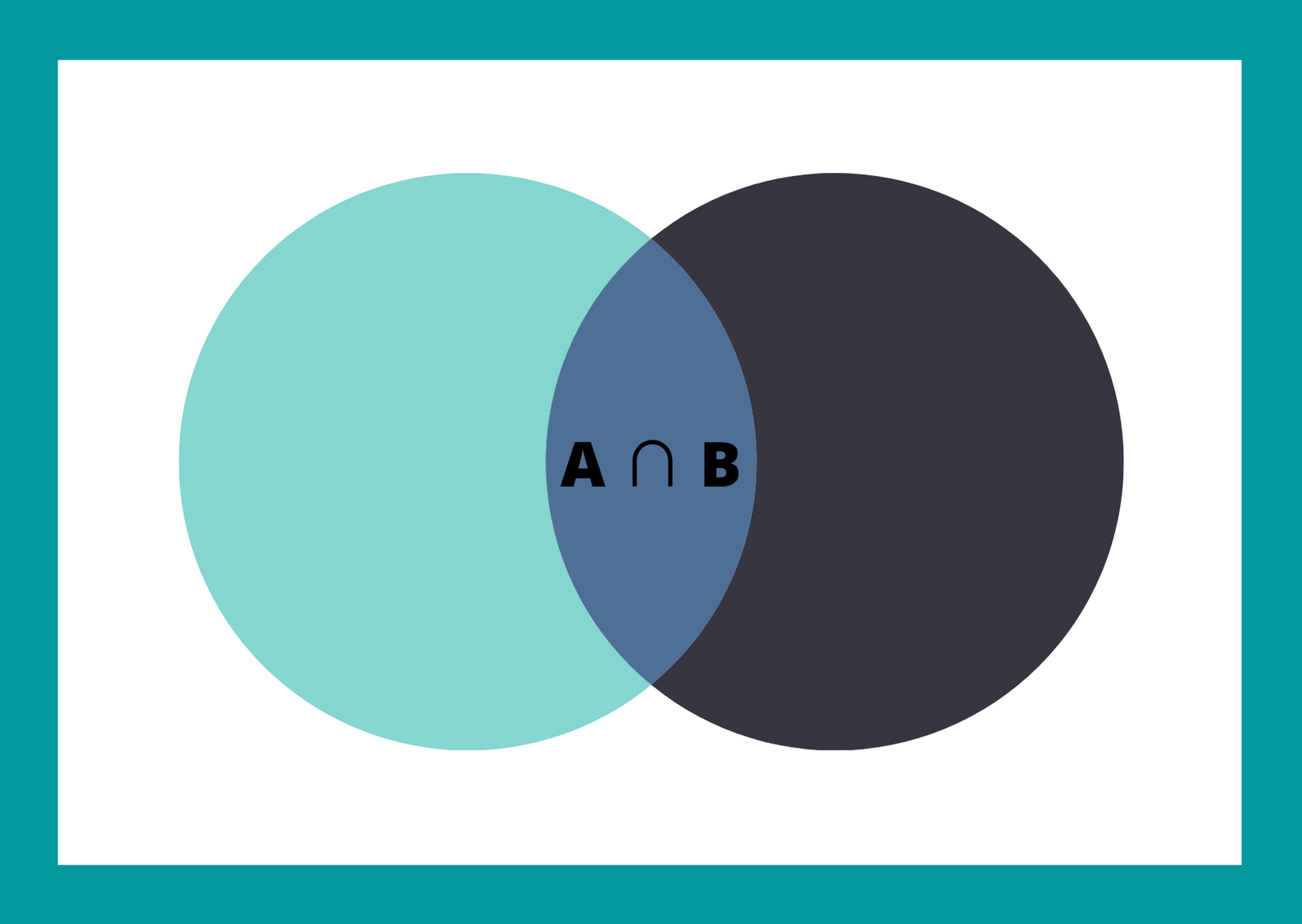 And by substituting the above value in the equation we'll get the desired answer, as shown in the image below : 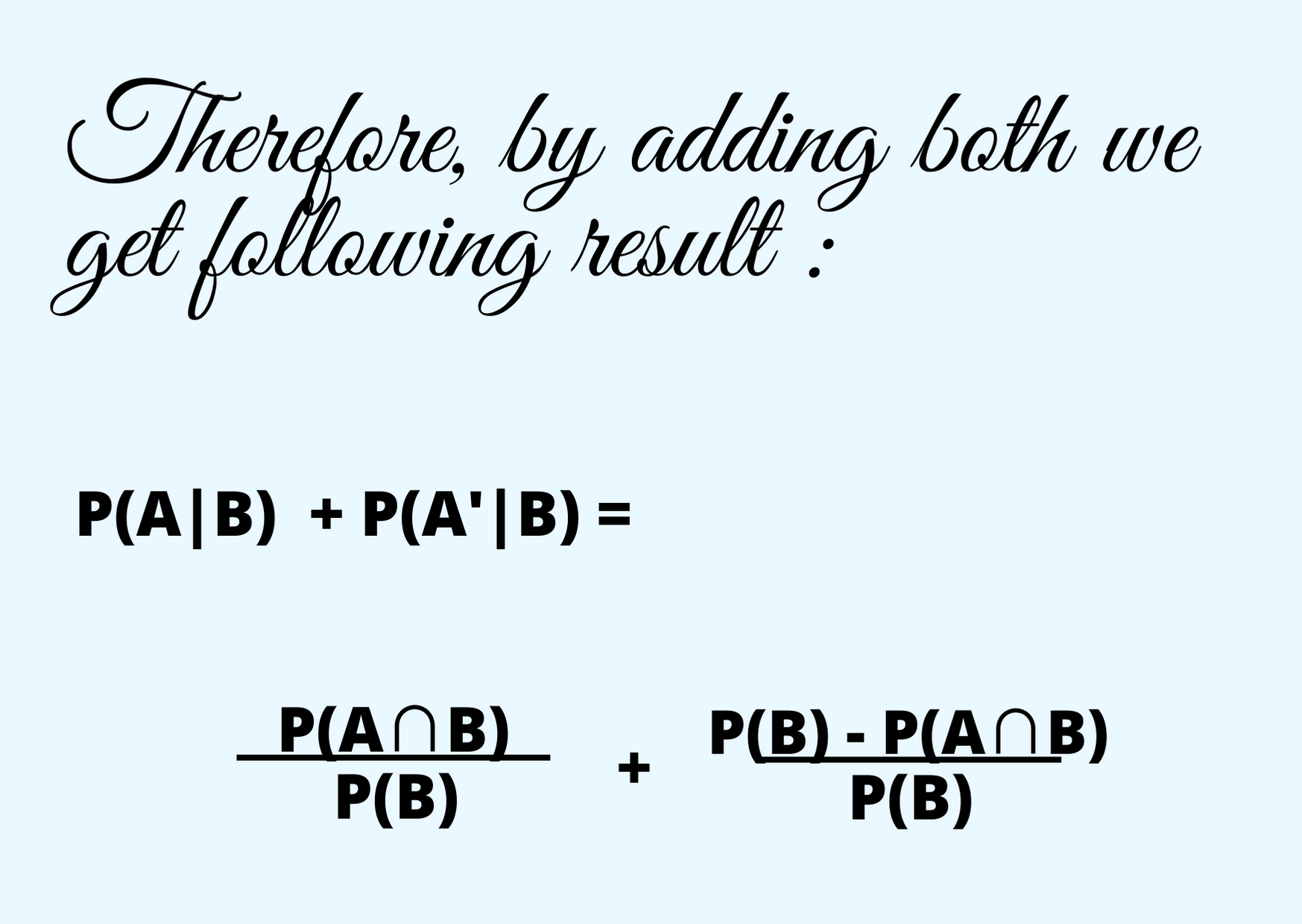 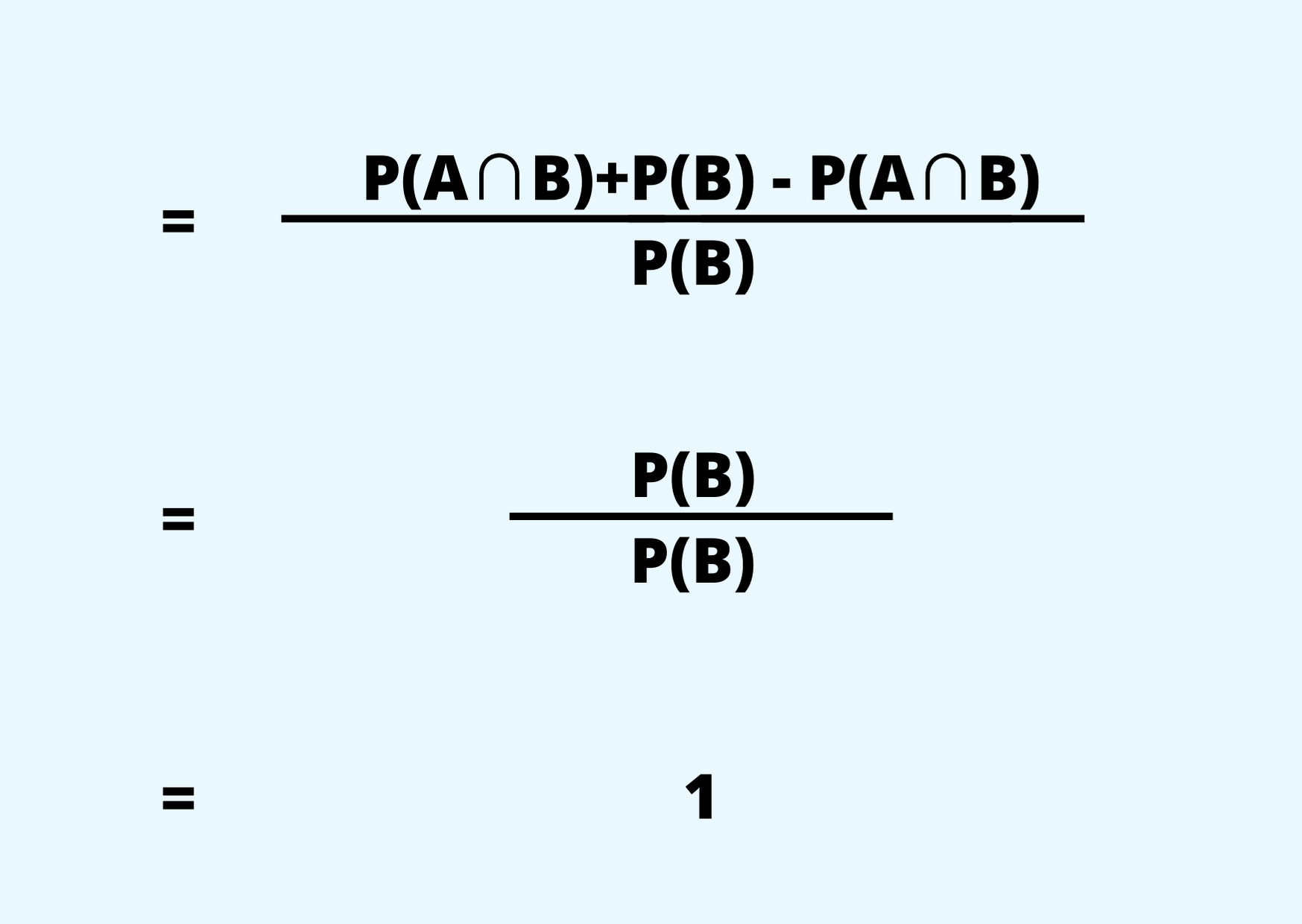 Probability and its notation are so abstract to so many students that using context-free logic and symbols is all but guaranteed to not work with a huge share of students. They just don't trigger any related knowledge in students' heads. One of the few truly good rules of thumb in teaching is that you should usually go from concrete to abstract and from prior knowledge to new knowledge. Going backwards rarely works.

(3) Use let statements and standard probability notation to express your thinking in parts (a) and (b) of the two questions above.

In the spirit of the answer by Tac-Tics, I like the picture with a unit square. One event splits the square horizontally, while the other splits vertically. Your second formula focuses on one strip only. Somehow given B means you can only be in one strip now, not in the whole square.

You may have a look at figure 2, a geometric interpretation of Bayes' Theorem in https://en.wikipedia.org/wiki/Bayes%27_theorem

After a football game, the team always send a member to a nearby pizza shop to pack food. Different member has different preference on different tastes of pizzas, but whoever was on the duty, sum of the possibility of his choosing each taste , shall be 1.

Not the answer you're looking for? Browse other questions tagged probability or ask your own question.

6
Recommendations for free, basic resource on discrete probability for a discrete structures class?
4
Example illustrating use of additivity of (probability) measures before introducing independence and conditioning
17
Common misconceptions in high school probability curriculum
4
How to convince the following probability problem to highschool student?
4
How to explain the sample space of Monty Hall problem?
46
How to explain that winning the lottery is not a 50/50 distribution?
6
Difficulty in explaining sample space