Arguments against multiplication by 'stacking'

A 8th grade student I was working with recently was faced with squaring 37 in a problem that they were working on. The student stared down the numbers for some time, and then came up with some slightly incorrect answer.

I put my own pencil to the margins of the page and did the multiplication by hand, and asked why the student had attempted such a large multiplication in their head rather than making some scratch work of it. The answer surprised me:

We're not allowed to do multiplication by 'stacking'.

Is this practice wide spread? What motivates it?

edit: by 'multiplication by stacking', I mean this:

Some context is missing here. But I'll go ahead and speculate scenarios for why a math teacher would (temporarily?) prohibit multiplication by stacking [and in writing? --- nothing stops the student from doing stacked multiplication in their head]. In no particular order:

Maybe instead of the "stacking" method we learned in the last century, they are supposed to use the "diagonal" method like this 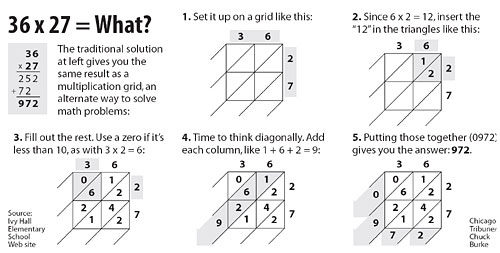 Although anecdotes are usually badly reported samples of size one, I'll answer with one. Trying to diagnose his problems with multiplication, I tried giving my grade school son variants of the same problem, written in "stacking" form, e.g. $123 \times 456$, $456 \times 123$, $1230 \times 456$, $4560 \times 123$, $1230 \times 4560$, etc. My hope was that after the first he would realize that rest could be deduced from its result with minimal computation. Instead I discovered that he had not learned to multiply well by "stacking" (he doesn't write neatly, and his columns are like the one in Pisa, so to obtain the final sum he adds digits from different columns; usually each row of the answer is correct, but the final sum is wrong). He did in fact perceive what I had hoped - he recognized that his five answers (four of them incorrect) were inconsistent, e.g. that the first two had to be the same and his answers weren't, and so forth, but this recognition didn't help him decide which answer was correct or where his mistakes were! The moral (for me at any rate) is simple (although perhaps this is just confirmation bias in operation) - for a student who doesn't have operational mastery of the basic rote operations it's silly to worry much about interpreting the operations being performed. Approaches that emphasize such interpretation are important and useful, but they can't substitute for learning some effective and efficient algorithm for reliably performing multiplications correctly. Rather they should accompany and follow the exercise/practice/drill that is their necessary precursor.

Not the answer you're looking for? Browse other questions tagged secondary-education multiplication-table or ask your own question.