How much credit to give a short exam question with one error?

In comments here there seemed to be significant difference of opinion on how much credit to give to a short exam question with a single critical error in it.

Consider the example of student work below, from a community-college College Algebra exam. The only real mistake is the pair of sign errors in the first line of work: 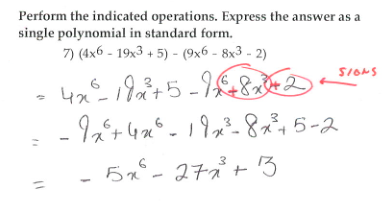 On a percentage basis, how much credit should be awarded to this student on this problem? And, related: How many discrete gradations of quality are warranted for a problem of this extent (e.g., as they might appear in a grading rubric)?

(P.S. It may be helpful to note that this kind of mistake is probably the most common source of errors for students in all the courses that I teach.)

I'll try to make this answer a little more general than just telling how many points I would give for this particular error (if interested: I'd give 5/10 at most, most likely less).

For that, let's discuss three different kinds of computation errors (i.e. not including logical errors, wrong proofs, etc.). The given error in your image falls in the third category and thus should lose lots of points...

This is the most common mistake, the one you might have thought about when asking this question. The student simply put a wrong sign/a wrong digit/..., but did all the right computations. Here, the general rule is: Give almost full points, unless the problem got a lot easier through the mistake. As an example, consider the task to differentiate $$\frac{5x^4 + 7x^2-3x}{x+3}.$$ If a student forgets to copy the three from the question sheet and instead differentiates $$\frac{5x^4 + 7x^2 - 3x}{x} = 5x^3 + 7x^2 - 3,$$ this is a lot easier and can only give few points, even if it was an honest mistake of just forgetting to copy this one digit.

There are many examples of exercises where the results can be verified quite simply, e.g. computing zeros of a polynomial, computing the kernel of a matrix, etc. If there is a small error here that goes unnoticed, it should give more points off. On the other hand, if a student writes something along the line of "I put this value into the polynomial and it turns out to not be a root, however, I can't find where my computation went wrong", then doing this test should be rewarded by only taking off points according to case 1. This is also important in other classes (physics, etc.), if you for example make an error in computing the speed of an object, it should at least give partial points if you notice that this car, driving at about twice the speed of light, is highly unlikely. :)

This is the gravest situation, and the situation you have in your image. Thus, it should give the most points off. Let's take your image as an example of what I mean. The question to write this as a single polynomial asks the student to perform two steps:

Note that collecting the powers of $x$ can be done without understanding the distributive law.

Now this student did not understand this law and failed at the first step. It might look like only two wrong signs, but looking more closely, the student simply dropped the parentheses without doing anything else. Thus, this error is just as bad as saying $$5(x^2+3x+7) = 5x^2+3x+7.$$ As the distributive law seems to be the current topic in class, there should have been quite a few examples discussed before the test and this student simply didn't understand this topic. Thus, you should only give few points here.

Note that it is sometimes difficult to distinguish between the first case and the third one, especially if only looking at a single question, e.g. you might consider it case one instead of three if the student did all other problems with distributive law correctly... Furthermore, it also depends on the current topic taught in class: if your given mistake happens in a graduate course in mathematics, it might be considered case one; whereas in a first year course, discussing the distributive law, it is a very, very bad mistake.

edit: Regarding the comment(s), I'll try to make the argumentation for how many points to give short(er than it was before). When deciding on points for an exercise, you have to see both the whole exam and make sure that points are fair, and you have to look at each single exercise and make sure that it can be properly graded. If you give not enough points, then you might be forced to go down to half points or even quarters when grading, because "There is an error, but still, most is correct...". If you give too many points, you might end up giving points to a completely wrong exercise, because you can only take off so much.

Looking at the exercise you posted, I'd give 4 points. There are two major tasks here, as explained above: Removing the parentheses and collecting the $x$. For each step, two points is a good number. This will allow to take one point off for minor mistakes (e.g. $5+4 = 8)$ and two points off for major mistakes (e.g. $2x^2 + x^3 = 2x^5$).

I like to grade questions like this on a five-point rubric. The main aspect of this problem is distributing the negative sign into the second group. Presumably students had practice problems similar to this. I would score this as 3/5 or 60%. It is D work. It is not satisfactory.

Without knowing anything else about the exam (which class it was, when in the term, etc.), my vote is 7/10 points.

If this is a basic/intermediate algebra class, then I see at least four things being assessed here:

As given, the student's answer demonstrates three of these four items. Whether these are "equal" in importance is debatable.

As instructors, focusing on one error is tempting, because we might look at a problem worth 10 points and say "I can't give this problem 70% -- it definitely doesn't show a passing knowledge of the material." However, if I take a good look at any one problem I assign and ask "exactly what knowledge or skills are necessary here", I may find that students are having to show a lot more understanding on skills I didn't plan to assess. Therefore, I would focus on what things students must do correctly, and then award points based on a correct demonstration of those discrete skills necessary to get the right answer ("points earned" vs. "points lost").

In the particular problem posed there are essentially two tasks. The first is to distribute the sign over the second term (this implicitly requires understanding that negation is involutive). The second is to correctly pair the coefficients of like powers of $x$. The student has failed completely at the first task, and has completed the second task successfully. How much credit to give boils down to how much importance one places on each of these tasks. The first seems slightly more difficult (however, I have limited experience teaching at this level), so I'd be inclined to give slightly less than half credit on this exercise. The perhaps more difficult half of the exercise is botched and the final answer is wrong (the student should be encouraged to evaluate and compare the initial and final form for some simple values of $x$ such as $0$ and $1$ as a way of checking the correctness of the response).

The precise point values to assign depend on the grading scale and system in use. This feels like a failing answer, so if 1/2 is minimum passing, I'd view this as roughly 1/3 (so in the US, where 7/10 is minimum passing, maybe it would be scored apparently higher), but saying anything precise about numerical values requires knowing well the local context, grading system, and standard practices.

I've seen it go both ways. "The answer is wrong. No credit" at one extreme. Or as little as 2/10 off for failing to distribute the -1 before the parenthesis.

When students complain to me that their teacher was unfair, having given zero for this, I explain (via a story from my own HS experience) that a doctor can potentially kill a patient for the misplaced decimal.

I also remind them SATs are scored either right or wrong for each answer.

Joel David Hamkins recently gave a sufficiently excellent argument for a 5-point grading system that I'd like to quote it here for the record. (By implication I think this would argue for something like a 4/5 or 80% credit on the short algebra question above.)

I use the following method of scoring student work in mathematics, where all problem solutions are graded on a five-point scale. It has worked well for me for about twenty years, and I would recommend it to anyone.

4 = solution is marred by a few minor errors

2 = the solution has displayed some understanding of relevant ideas

1 = the solution has displayed some understanding of some ideas

0 = the solution has no merit

I find it easy to use this rubric when evaluating student work. I just keep the phrases in mind, and assign the corresponding score. Thus, the work is evaluated as a whole, on the basis of whether the student has demonstrated mastery over the topic.

My quizzes usually have just one problem, graded out of five. The final exam will have ten or fiften problems, each graded out of five. I often give extra credit for participation on math.stackexchange or whatever, and these are also worth up to five points.

If the exam questions are to be graded independently on a problem-by-problem basis, then go ahead nick a few points [3 out of 10, let's say] because presumably there are numerous other errors [combining like terms, eg] that can be made and they are all worth something.

On the other hand, if there were an exam wide rubric where one of the things to check for was understanding how the parentheses are handled in the presence of a minus sign, then it's a matter of seeing what the performance on the rest of the exam was like. If the student does not demonstrate an understanding of how to reconcile $-(ax^m - bx^n - c)$ (or similar structures) on other problems, then they should get a few points taken off [however many were attributed to the skill / concept / mechanic] for the entire exam [or proportionally per problem]. However, if this was the only mistake of this type on the entire exam, I would lean towards a minimal deduction, perhaps even zero depending on how the rest of the exam looks.

In a nutshell, I try to be qualitatively cognizant of the topic-wise correlation inherent in exam problems. I tend to not want to repeatedly penalize a student for the same mistake throughout the exam, especially if the exam is testing on a diverse set of topics [unlike, say a basic arithmetic exam].

Not the answer you're looking for? Browse other questions tagged students-mistakes grading or ask your own question.

8
Should students be given partial scores when they gave an incomplete proof by contradiction?
4
How much credit for a single arithmetic mistake?

11
Grading homework problems on completion vs. correctness, and overall grading
9
How do I grade long calculations in a mathematics exam in a fair way?
30
Near-universal student mistake on $\lim_{x\rightarrow\infty}e^{x+1}/e^x$
8
Rubric for grading an undergraduate real analysis course
16
Frequent calculus error: replacing interior part of an expression with its limit
10
“Good” and “Bad” student intuitions when teaching and learning mathematics
4
How much credit for a single arithmetic mistake?
2
Continuous evaluation/Participation points
9
Experimental results about the variability of grades on a math exam
16
Making solutions to all problems freely available