Stack Overflow for Teams is moving to its own domain! When the migration is complete, you will access your Teams at stackoverflowteams.com, and they will no longer appear in the left sidebar on stackoverflow.com.

Check your email for updates.

Problem "seeing" the perimeter of a figure 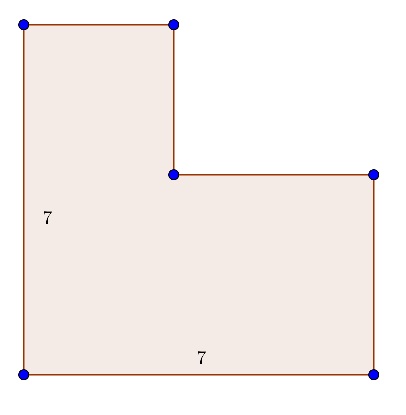 I was helping a home-schooled student with her homework when we came upon several images of figures that we were supposed to find the perimeter of. In several of the figures, some of the lengths were not given; yet, with some thought, the perimeter could still be figured out. For example, the perimeter of the above figure is 28. She could not "see" this.

Her arithmetic skill are admirable. She is neat, organized, and is capable of looking over her work and finding where she made her mistake. Yet, drawing the square and showing what equalled what, did not impress her. I longed for a box of toothpicks. I got the feeling that she was getting area and perimeter confused in some way but I ran out of time before we could resolve her problem.

Does anyone have any ideas what conceptual problems she wasn't resolving?

This is pure speculation — I don't have enough information to know what the student was thinking — but they may have only known how to compute the perimeter in one way: taking the lengths of each edge and adding them up. (They may have even unconsciously identified the perimeter as exclusively being the result of that procedure.) However, in the given figure, we only know two of the six edge lengths; the other four edges have to be split up into two pairs for which we only know the sum of the edge lengths.

So, it's plausible that the missing observation was something like this: to compute the perimeter of a polygon, it's enough to know the sums of edge lengths for any partition of the edges; it's not necessary to know each edge length individually. Once stated outright, it's not hard to see this is true — it follows immediately from associativity of addition — but many observations that are obvious after the fact aren't always obvious beforehand.

Putting this observation into practice also requires more reasoning than adding up a bunch of known edge lengths, since you have to think about which edges can be grouped together so that their total length can be computed. It's a problem that can't be resolved by purely mechanical application of a fixed procedure; one typically has to play around with it a bit and try out a few things. Students who are less experienced or comfortable with problems that require use of reasoning, trying out ideas that aren't guaranteed to be successful, and don't conform to a fixed procedure will often have difficulty with such problems.

Perhaps a targeted illustration, a "proof without words," might suffice to break the grip of algebra and computations, which might be confusing her...? 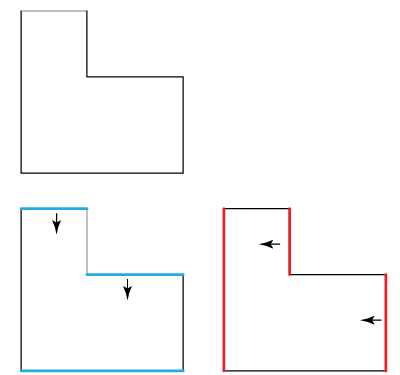 "Adding up the lengths of the edges" really is an adequate definition for the perimeter of a figure. The concept she might be missing is that it doesn't matter how long the individual edges are, the perimeter is always the same.

I would try explaining this to her using a challenge. Give her some grid paper (if she's used to it), tell her the length of all the edges except two, and ask her to find all the possible perimeters for the figure. That isn't a rigorous mathematical proof, but it might help convince her.

Your approach sounds a bit stiff to me. Put a picture inside the shape. "Adding up the lengths of the edges" might be "How far is it round the edge?" for a start. It doesn't take long before the picture can be dropped and better mathematical language can be introduced, unless your pupil has limited learning skills.

Is it just a simple matter of pointing out two pairs of congruent segments? It is evident that the perimeter of the rectangle is 4x7=28. 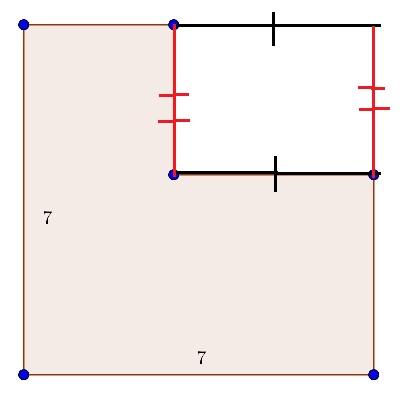 I often see a "shift" among my fourth graders when we move into geometry units. The students who have been quite successful with computation and even algebra concepts begin to struggle to "see" things in geometry...similar to what you describe. What's helped is putting the area and perimeter piece on hold until we've done a thorough investigation of the attributes of two-dimensional figures. Once the students are truly comfortable identifying and classifying figures based on their attributes they have a much easier time "seeing" with problems like this.
The go-to strategy most of my students would use here would be decomposition of this shape into two rectangles. They'd then be able to apply what they know about congruent opposite sides of rectangles to "see" that the lengths of the two parallel unknown sides must equal 7.

39
What does math education research know about difficulty vs. effectiveness?
11
Ideological Teaching in Logic Courses
7
Native language, writing, and mathematical problem solving
6
Need scientific source to prove the difference between arithmetics/calculus and real mathematical skills
5
Course of action with 13 year old with weak sense of number and operations
29
Inability to work with an arbitrary mathematical object
8
Scientific results on the usefulness of physical units in secondary education?
6
Do my students know elementary algebra; do they just use online calculators or external help; and is this ok?
0
The two paradigms of seeing a functions