As far as I know (and here I am refering to my own math education), operator priorities of $+$, $-$, $\cdot$, $\div$, power and parenthesis are taught via some simple phrases like

But for many students a formula like $1 + 3 \cdot 4 \div 7 - 2^2$ is nothing more than a confusing sequence of symbols. I (as a mathematician and partially computer scientist) think more in terms of trees when seeing something like this. My brain automatically inserts the parenthesis and I have a feeling for how to type this into my calculator to get the result that is implied by these symbols.

However, we all know that students often struggle with applying these rules. My conjecture here is (and please correct me) that they see the above formula as a linear object instead if a tree like structure: 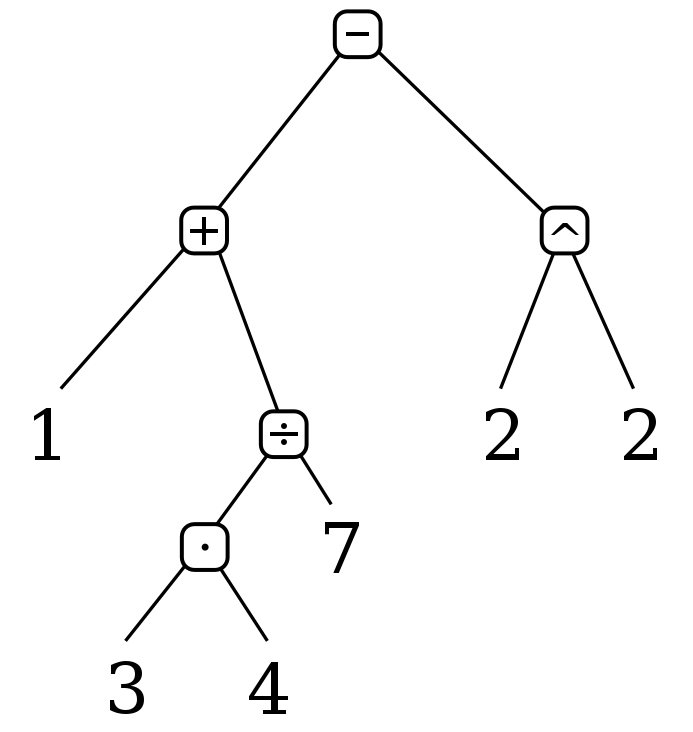 It is nice, but I suspect nice for an adult or at least a much older child who is moroe used to these graphical structures. I'm sorry but sometimes ust having extra ways of showing something is not helpful, is actually the opposite. And this would be my take on the operator priority since you are making kids learn complicated logic trees at the same time they learn the basic syntax. I think instead having them draw in the parentheses is more intuitive and readable.

The answer might be different for an adult looking at the order of operations in Excel, which annoyingly is different from standard order (for no good reason just MSFT messed up and now there is too much code written to change back).

It is rather interesting to note how parallel this suggestion runs to the idea of diagramming sentences in English grammar classes at around the same age, historically. I say "historically" because (as noted in comments) my understanding is that diagramming sentences is very much in disrepute, no longer taught, and mostly unknown by current education-school graduates. More generally, even the very idea of dedicated grammar lessons has been officially frowned upon for the last few decades. It is claimed that a multitude of studies show no relation between diagramming sentences/grammar lessons and educational outcomes. Some articles with summaries and links to such meta-studies:

Among the most common criticisms are (very similar to the answer here by user guest): "... On a less emotional level, they point out that it involves mastering not one skill but two: the rules of grammar and syntax and the making of diagrams, which is something like baking a loaf of bread and cutting it into fancy shapes before you can make a sandwich." (This by sentence-diagramming enthusiast Kitty Burns Florey).

Generally speaking, I think this is a loss, and personally I refer to the twinned removal of grammar/algebra skills around the junior-high level as part of the "War on Structure". However, before pushing for this particular CS search-tree-like method, you should at least be aware that such methods are explicitly frowned upon in many educational circles, lack any analog that students are familiar with from grammar lessons, and supposedly have hundreds of studies showing that they do not benefit students.

Personally I do drill students on the order-of-operations by asking them to write out in a linear list the order of the operations as they will be performed. To my mind, this does address somewhat more directly the fact that operations have an order that will occur one at a time. For example, it's how the quiz on my drill site Automatic Algebra is structured.

I wonder if you can make an inroad by pointing out that every calculator they use employs some order of operations (e.g., BODMAS), and actually builds the tree and then evaluates the expression following its structure. So you could mix the math with the "how-does-a-calculator-work" discussion. Maybe that would be more impactful than just introducing trees as a convenient mental technique—tree expressions are actually used by their phone calculators.

There is an iPad app that does this: DragginMath. Does what you envision. See the tree being built step by step. See the hierarchy explicitly. Then drag tree nodes around to invoke the various rules of algebra. I had this idea about 30 years ago, finally did something about it.

Another answer mentions GraspableMath, which is significantly different from DragginMath. DragginMath solves equations, too. It does this using the standard algebraic properties only. GraspableMath takes a lot of liberties with mathematical language to try to get things to happen somehow, where somehow is often hard to explain in terms of actual algebra.

Acutally, I learned order of operations this way in school; even nowadays you find 'operator-diagrams' in school books, starting in primary school (only addition, multiplication; use of brackets).

Next to the iPad app 'DragginMath' mentioned in the answers, there is an app online named GraspableMath. I use it not only to teach order of operation, but also equation solving. You can 'scrub' the parameters and look what happens to the result.

8
Learning math through fun rather than rote learning
31
What is a good method for drawing a Möbius band on the blackboard?
12
Correctness in learning mathematics
24
Should we "program" calculus students, like the physicists seem to want us to?
12
tutorial active learning
62
Is there a virtue to learning how to compute by hand?