On the final exam, students are asked to find something like $\displaystyle \lim_{x\to1} \frac{x^2-1}{x-1}$ and reply that it's undefined because it's zero over zero. If that were right, then derivatives would not exist. They miss the central point, which is that in differential calculus limits are there primarily to deal with limits cases where the numerator and denominator approach zero, because that's what derivatives are.

For students who are not there for the purpose of becoming mathematicians, comprehensively covering all topics involving limits that they are able to understand is a mistake: It distracts them from the main event. Are there textbooks written in a way that is consistent with that fact?

(This could applied to many other areas of mathematics as well.)

I recommend a newer Calculus textbook, which was published earlier this year: DJ Velleman's text, "Calculus: A Rigorous Approach" (link; also mentioned in my answer to MESE 11971). In the introduction, there is a "note to the instructor" as follows:

One of the "novel approaches" in this text is its presentation and notation of and around limits: 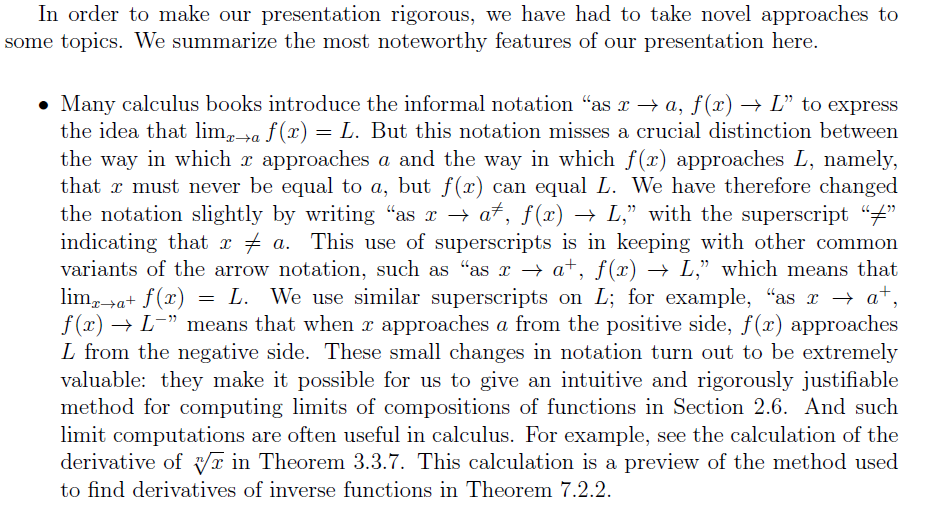 I would say that from the perspective of this text, the "main point" as concerns limits fits into a broader focus around which the topic of Calculus is structured: that which Velleman calls the paradox of precision through approximation. Here is one final excerpt in that direction, which is followed in the text by concrete, motivating examples (and section 2.2 is entitled What Does "Limit" Mean?). 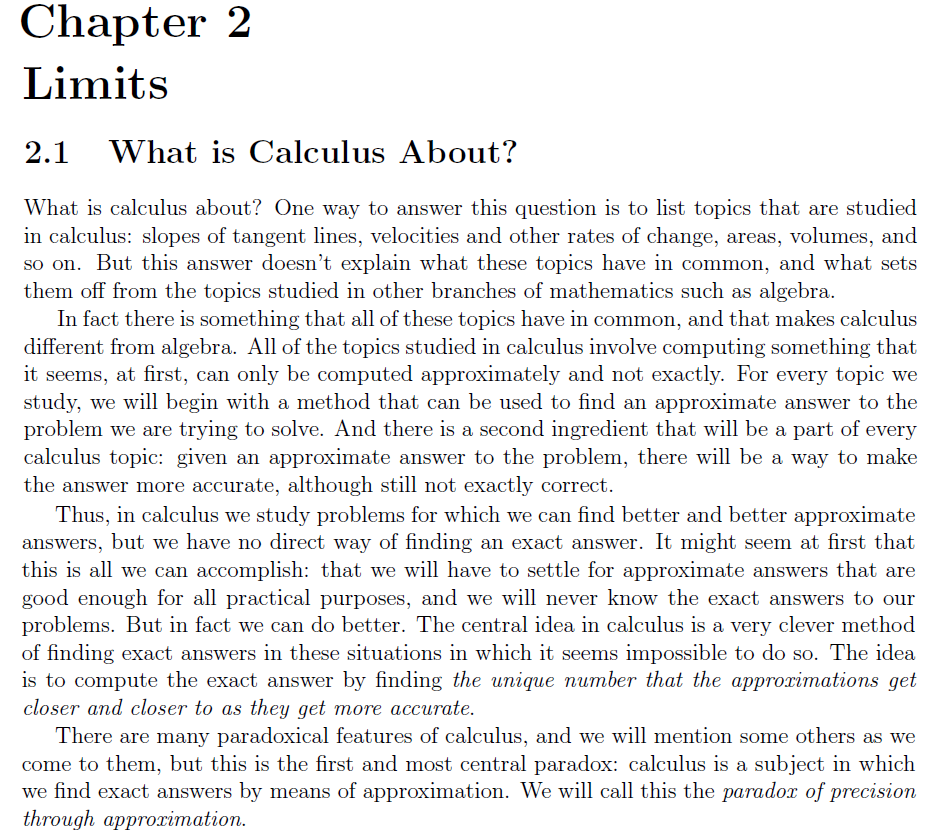 I believe that the subtle but important change(s) in notation, along with the structuring of this text around broader themes in Calculus, make it a worthy candidate for the sort of treatment of limits (and beyond) about which you ask.

I think pedagogically sometimes approaching something with a lot of examples actually makes it easier and gets you there faster than an approach geared only to the final insight (or to a point of generality). Bleecker expresses this well (with data from his teaching experience) in the preface to his book on partial differential equations. He discusses how it is better not to get into Sturm Louisville immediately but approach it indirectly via several examples or smaller problems than the general case. I suspect the same to be true about limits which are really a kind of new breathtaking concept when the student hits them at first.

And I understand your point about the students not knowing the answer to your question at the end of the year. But to be fair one would want to look at an alternate approach and if it does any better. Or what is lost if you just concentrate on that one question. Not even making a statement on what the result would be, but just don't be sure it would go your way.

Finally I don't think missing that question is the most important learning for a calculus student. One can forget some of the theoretical details on calculus and still do more important results (for the mass of the population taking calculus) like finding minima and maxima to curves--key concept and practice in engineering, physics, chemistry, biology and business.

P.s. I struggle with questions like this that have a huge predicate (relevant to pedagogy and worthy of discussion) and then a simple final request. Will the Q and A police come down on me because I discussed the predicate, not gave a specific textbook answer to the question at the very end.

Perhaps you can restructure the final exam question as follows:

In this way you give the student enough clues to orient their thinking on the exam and show they can connect the limit with various stages of the course.

It is well known that Abraham Robinson's framework occurs in standard mathematics (ZFC, etc) and Keisler's famous textbook based on rigorous infinitesimals is well aware of the problem you mentioned. Therefore it starts with derivatives before continuity and continuity before limits. Then limits can be defined as a paraphrase of the shadow. In my experience teaching over 400 undergraduates over the past 4 years using this approach, students don't make that kind of mistake when they learn true infinitesimal calculus using this standard textbook.

Not the answer you're looking for? Browse other questions tagged mathematical-pedagogy calculus textbooks curriculum or ask your own question.

29
For calculus students, what should be the intuition or motivation behind series?
13
When should we get into limits in introductory calculus courses?
20
Should we tell students to never replace parts of an expression by their limits when taking a limit?
16
Frequent calculus error: replacing interior part of an expression with its limit
26
Grading a limit problem
8
Real World use of the Function $(\sin{x})^x$
12
An intuitive explanation of l'Hôpital's rule for ∞/∞
5
Making the leap from Pre-Calculus to Calculus