What did math educators think about the transition to widespread classroom use of calculators?

When we have discussions about which technology to include in our classrooms today, we are often somewhat conflicted with many standard arguments and worries being presented on both sides. To help inform this discussion, I'm looking for sources that chronicle math educators' opinions about the adoption of the scientific calculator in the math classroom.

I am not interested in anecdotes from instructors or students who saw the transition happen first-hand unless you can refer to notes or writings that illustrate what you were thinking at that time.

For example if anyone has access or links to the sources mentioned below (from "A Brief History of Calculators"), I would love to see them:

In 1975, the National Advisory Committee on Mathematical Education (NACOME) issued a report on calculators, suggesting that those in eighth grade and above should have access to them for all class work and exams. Five years later, the National Council of Teachers of Mathematics (NCTM) recommended that “mathematics programs [should] take full advantage of calculators … at all grade levels.”

Googling "NACOME" 1975 calculators seemingly leads to the report that you mention:

As a final note of interest, you may find that Zalman Usiskin shares in your curiosity, as remarked in the recent(ish) interview: 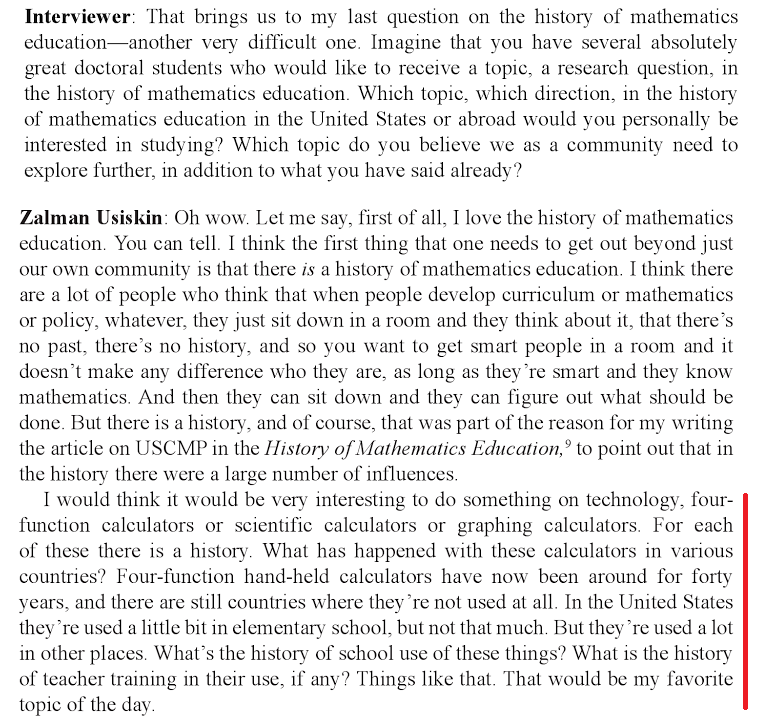 [Not meant to be a putdown, just some basic instruction in how to search.] Here is a Google Scholar search with certain keywords and restricted to 1950 to 1980. You can consider to open it through 1990 or later (see anecdote). You can add or remove keywords. If you want to make the search more restrictive, put the keywords "teacher" or "reaction" in quotes (that makes the search require them.)]

Here is first paper I found that hits your needs (first page of Google Scholar window):

I would consider to open up the search a little later into post 1980 (calcs really weren't in many math classes before then...experiments sure, but not wide pattern of use.) Would also consider to just read some of the reports on efficacy and then skim them to look for teacher reaction...since that is more your interest than efficacy.

[Anecdotal segue, but it is to frame discussion at least:

You need to be careful to distinguish use of calculators in science number crunching and in math class. The former was very rapidly introduced and noncontroversial. The latter was very slow and remains controversial--like ask yourself, do kids have a hard time learning to punch buttons so they need to practice it--it was not a problem in chem class to use it for stoichiometry. I went to school in the 70s and 80s and scientific calculators were VERY fast in introduction into the sciences. There was zero controversy about replacing slide rules or log tables (I never used a slide rule, but I used log tables and was just a couple years past routine use of slide rules.)

I personally don't remember any controversy about calculators in math class either...as it just wasn't done. I went to a competitive grad school in the late 1990s (in the hard sciences) and I don't recall seeing calculator use in undergrad or upper grad courses and many difficult algebra manipulations were all done by hand (e.g. Jackson E&M, Tinkham superconductivity...lots of Bessel function craziness). I remember being forced to use Maple once, but it was to learn how to make that beast print and set up a complex phase diagram and associated diffyQs and a numerical solver. Not because of needing the CAS. I suspect a lot of physicists still expect and get manipulation (see comments to this effect on Physics Forum) and there are many colleges where calculators are not used in a normal calculus class (most of the problems don't have arithmetic number crunching like chemistry and they want you to learn the methods of integration and manipulation and the like, not have a CAS do it for you.)]

I want to preface the response with the fact that calculators are not in wide use in high schools in the United States of America. I also think that we should not use calculators anymore now that we have access to tools like Jupyter notebooks and languages like R and Python with substantial libraries that crush anything possible on a handheld calculator. Further, nobody I've met carries a graphing calculator around with them except math students and teachers. When people grow up they use computers to solve these problems and it's about time we did the same in the mathematics classroom.

The article Usiskin is referencing in his answer comes from the NCTM's History of School Mathematics, a two volume set that has some relevant articles including a history of technology in the mathematics classroom. Here's a link to the books on Amazon. (https://www.amazon.com/History-School-Mathematics-Volumes/dp/0873534719) There is also the Ackerberg Hastings text on technology in the mathematics classroom.(https://jhupbooks.press.jhu.edu/content/tools-american-mathematics-teaching-1800%E2%80%932000)

In terms of research that discusses the use of calculators, you may be interested in the volumes edited by M. Kathleen Heid on technology in mathematics education that include a variety of works dealing with calculators. (https://www.amazon.com/Research-Syntheses-M-Kathleen-Heid/dp/1931576181)

The NCTM has many different articles across their journals that have taken on calculators and have published position papers on the issue and give these references as support:

If you are interested in the computing work rather than calculators you might find the Seymour Papert or James Kaput work interesting. Also, there are even early FORTRAN courses from the SMSG (a group in the 'new math' of the 50's and 60's) that tried to introduce computing in elementary, middle, and high school classrooms.

Not the answer you're looking for? Browse other questions tagged reference-request technology-in-education history or ask your own question.

19
When did the American school system's progression of math classes take its current form?
8
On the use of calculators in elementary/high school? Computer algebra systems later on?
28
What was the problem with New Math? Why did it end?
5
What did you use to teach scale drawings?
11
What is the impact of such a device on math education?
8
What are the best apps for students to discuss math problems?
11
Are there examples of countries where the use of CAS systems or graphing calculators was deemphasized or discontinued?
13
SMSG: Did any school districts actual teach the curriculum as planned and what were the results for the teachers and students?
9
Experimental results about the variability of grades on a math exam