I'm in Algebra II this year, and I have to admit, it's kind of boring. The only new thing we've touched on so far this year is how to graph piecewise functions, and those are really easy to graph.

As it is, since the teacher puts the problems for the week on the backboard, I work ahead based on the homework for the next couple of days (there were a couple of days where I was the full week ahead, so I just read in the back of the class).

While I'm investigating options to generally accelerate the class (maybe try to finish it in a semester instead of two?) I know the likelihood of those options working out is very, very low, so I'm asking this question.

What sorts of extension or substitute activities could be done based on the Algebra II curriculum in the United States? For whatever it's worth, I've done a decent amount of math on my own - some linear algebra and calculus, a general awareness of some of the topics in abstract algebra, and a heavy interest in physics.

I taught two sections of Algebra 2 (ninth and tenth grade, US) last year. The materials we use are internally created, and while there is not (yet?) a public repository that makes all of them freely available, I paste below a problem set that I personally wrote for students to complete. I'm not sure if this is the sort of thing that you are looking for, but the problems are (i) related to Algebra 2; (ii) original hence cannot be found elsewhere; and (iii) nonstandard and, I think, reasonably challenging.

a) Is $\sqrt{5+i}$ a real number or an imaginary number? Explain how you know.

b) Is $\sqrt{i}$ a real number or an imaginary number? Explain how you know, using a method similar to your approach in 1(a).

2) Suppose $f$ is a polynomial for which the sum of the coefficients is $0$.

a) Give an example of a cubic polynomial $f$ that satisfies the above criterion, and find all of its roots.

b) Explain why any polynomial whose coefficients sum to $0$ has, in its graph, at least one $x$-intercept.

a) For what value of $h$ is the piecewise defined function above continuous (i.e., the graph has no "jumps")?

c) Does $f$ have an inverse function? If not, explain clearly why not; if so, explain why (but you do not need to find its inverse).

Explain clearly why $f$ must have at least two irrational roots.

5) Let $f$ be a quadratic polynomial that can be written in either vertex form or standard form, i.e.,

a) Find the inverse of $f$ when $f$ is written in vertex form.

b) Find the inverse of $f$ when $f$ is written in standard form.

You might consider look at Exeter's books of math problems or the Art of Problem Solving texts. They are targeted at students around your age but look very different from your standard Algebra II presentation.

Personal experience: When I went to school, it was normal for Algebra 2 to be combined with Trig (i.e. 3 semesters in 2) for the kids on the GT track (who had taken algebra 1 in 8th grade.) Also, I did the Alg2/trig in summer before 10th so got more accellerated. (this isn't to say yeah me, but that if you sense you can handle the acceleration, go ahead and power through the material and move on to a real precalc course).

Perhaps you would find this extends Algebra II in interesting and challenging directions:

From the publisher's summary:

"a friendly introduction to plane algebraic curves. It emphasizes geometry and intuition, and the presentation is kept concrete. You'll find an abundance of pictures and examples to help develop your intuition about the subject, which is so basic to understanding and asking fruitful questions." 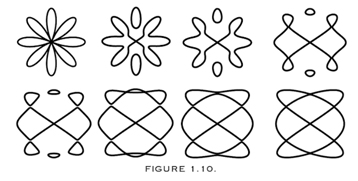