Why isn't the term *inequation* widely used in English?

For example the following is a question in an exam (in French) and the translated version, which doesn't seem to be a good translation.

I've been told that the term "inequation" is widely used in the middle east and some Arab countries. It's used in some standardized exams in middle school, high school and technical/vocational schools. See for example the center of educational research and development in Lebanon.

I have to disagree with the answers claiming that the word "inequation" isn't necessary in english or that it isn't widely used because "people" chose not to. The fact is that most english speakers don't know it exists and mathworld does a horrible job explaining it.

I taught mathematics in four languages. Of these four english was the most different in its terminologies and notations. For example we denote an open interval $]a,b[$ which is similar to the closed one $[a,b]$; in english they use $(a,b)$ for the open interval. That doesn't only cause unnecessary confusion with the pair (unordered couple) $(a,b)$ but also isn't compatible with the notations of geometry ($[AB]$ and $]AB[$ for segments and $(AB)$ for the line).

The same goes for many other notations and terminologies like a skew field not being a field, 5/8/2000 means "8 may 2000" instead of the international "5 august 2000". And of course the term "inequation" was one of them. The books published in US or UK never use this term; they use "inequality" to mean two different things. The books translated to english in other countries usually use such terms and terminologies.

The problem is that this term hasn't entered school books yet. If it didn't in french there wouldn't be many people using the term "inéquation"; that wouldn't mean that this word isn't necessary. So the necessity or importance of the word isn't correlated with the frequency of its use. If a curriculum reform introduced this term in schools, its use will grow exponentially at all levels. See this question on another site and this question where he had to use the inequality tag because there's no inequation tag until today [3 May 2019].

The image below is from the book The A to Z of Mathematics by Thomas Sidebotham. 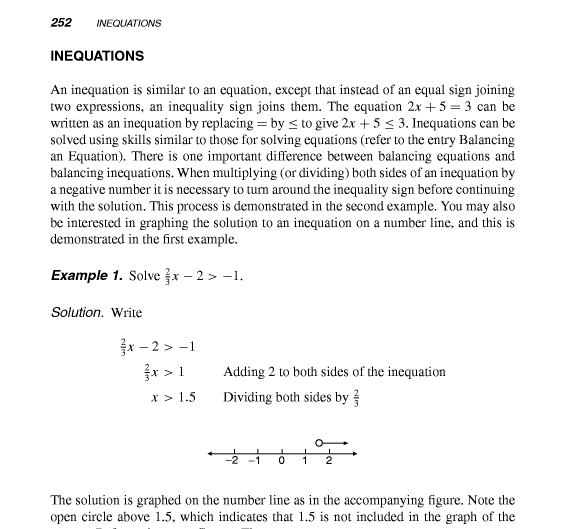 Finally comparing the english wikipedia article with the french one, the deutsch or the català articles, you see much less explanations in english. So a student who consults wikipedia won't learn much. Other websites explain it better with examples like this one or this one.

You ask "Why isn't the term inequation widely used in English?"

The answer, however tautological, is that the term isn't used in English because it isn't used in English. Perhaps more usefully, remember that languages change and evolve as speakers of the language (for example) start using new words, stop using old words, alter pronunciation, and play with grammatical structure. When a language possesses a word which is used infrequently, the answer to the question of why that word is used infrequently is typically "Because speakers of that language do not frequently require that word in order to communicate ideas to each other."

One important facet of language evolution is that you will almost never find two words which have exactly the same meaning. If a language possesses two synonymous words, one of two things typically happens: either the meanings of the two words diverge (for example, big, large, and huge all mean basically the same thing in English, but have different connotations), or one of the two words will fall out of favor (for example, the word "empathic" in English seems to be in the process of being replaced by "empathetic").

In English usage, the words "inequation" and "inequality" have nearly identical meanings. Moreover, it appears that there are very few instances where a native speaker of English might want to draw a distinction between these two concepts. As such, one of the two words is used quite a lot, while the other is used rarely. We can draw distinctions between the two words (e.g. via the analogy "equality : equation :: inequality : inequation") and assert that the words have quite different meaning, but the fact of the matter is that most English speakers don't feel that distinction, and therefore do not require the word "inequation."

You also, secondarily, ask why the use of "inequation" went into decline in the mid-20th century. I dispute that interpretation of events. If you expand the time scale to cover the last 200 years, you get a very different picture:

First off, if you look at the vertical scale, it indicates that this word has never been all that common, even in the late 50s and early 60s when it hit it's peak. More importantly, it appears to me that the word was hardly used until the late 50s, when usage spiked. The decline after that is simply a return to normalcy.

I think that the more interesting question is "Why did the use of the term inequation appear to spike in the late 50s?" A couple of hypotheses occur off the top of my head:

Finally, because this website is about mathematics education and not (for example) English language usage, there is a mild pedagogical argument against using the term.

Every time a new term is introduced, you create extra cognitive work for your students. The goal should be to introduce as little jargon and technical terminology as is necessary to understand the underlying concepts. Certainly, there are times when we really need distinct words to describe things. For example, the word continuous is very useful, as it hides a couple of distinct (though equivalent) definitions ($\varepsilon$-$\delta$? left- and right-limits agree with the function? etc.). Still, it is a bit of vocabulary that students have to learn, and they struggle with it. If some bit of jargon does not make future discourse easier, then it should probably be skipped.

In my own teaching, I typically try to avoid using the word "identity," and will typically use it interchangeably with "equality" and "equation" if I do happen to use it. Moreover, I can typically avoid using any jargon by simply asking students to do what I want them to do. For example, instead of asking them to prove an identity, I can simply give them the statement and ask them to prove it. For example, I would write

I might (depending on the class) finish this by stating "This formula (or equation or identity or statement) is called the 'Pythagorean identity'," but I can do that without ever explicitly defining the word "identity."

Your premise is not entirely true. We do distinguish between an equation and an identity in English sometimes, but most of the time we use 'equation' for both. 'Identity' is only really used on 'special occasions'. In particular, students are only likely to come across the term in the context of 'trig identities' such as $\sin^2(x)+\cos^2(x)=1$. There are no notable instances of 'identities with inequality signs' that students come across, so there is no reason to use different terms to distinguish them.

So equations are a subset of statements where the truth comparison is done on equality. When we start introducing inequality statements we are building the larger set, though we may not explicitly state it the beginning.

I do try to emphasize that statements are a test and the symbol is the type of test you are doing.

Though I would say we do imply it more than state this idea. So it may be good to focus language on statement and the type of statements we create.

I am really interested in ideas on language choice and pedagogy. Thus I am very interested in the the ideas behind this question and what others have seen and done.

11
Common phrases having different meaning
10
Term and reference for the problem of students “overassociating” concepts with each other
9
When did the term and taught technique 'cross multiplication' enter into common use?
9
What is the term for the marks used to show congruence in geometric figures?
19
Why are $m$ and $b$ used in the slope-intercept equation of a line?
10
Is the constant term a coefficient?
3
The term "unique" for functions and operations
3
What is the English word for the French "repère"?
3
What term describes the relationship between tenth, hundredth, thousandth and the number ten?