As well as mathematics I teach IB Theory of Knowledge, which includes mathematics as an area of knowledge. The class are mainly not students with a maths focus, although they all study at least some for the IB, and all studied mathematics at GCSE level.

One of the key concepts that I have struggled to get across to them is mathematics as a process of making logical deductions from a set of axioms, which has implications for the relationship between mathematics and reality. For example, I have talked to them about Euclidean versus non-Euclidean geometry, and how for a long time non-Euclidean geometry was considered an abstract curiosity but eventually turned out to apply to reality as a consequence of the non-Euclidean axioms applying to reality, but the example is fairly far from their frame of reference.

I think (based on some experience with math-for-broader-purposes courses at honors freshman university level, for example) that it may be suboptimal to try to introduce "the axiomatic method" to people who have little substantive mathematical or scientific (or philosophical) experience. Namely, in my observation, people very often over-interpret the apparently legitimate whimsicality or randomness of varying axiomatic systems. As though mathematicians apparently pick random variations of axiom systems, make whatever deductions they can, and occasionally "get lucky" in that they've done something "useful" (or descriptive of some aspect of "reality"?).

I do not think this at all faithfully represents professional mathematical practice.

A more reasonable, and perhaps more intelligible, portrayal of genuine practice might be that we want "economical" or "compressed" descriptions of "real" situations, sufficient to deduce further genuine facts/truths _in_advance_ of further observations. Or, since people generally do not quite understand what "deduce" could possibly mean, just say "predictive power"...?!?

That is, while some people are fond of trying to distinguish "pure" from "applied" math, it seems to me that the real point is a predictive capacity about things-of-interest, whether those things be abstract or very tangible, "creating jobs" or not, etc.

For example, a very simple thing that struck me forcefully as a pretty small kid was the possibility of measuring how tall trees and houses and flagpoles are by using "similar triangles". Sure, implicit in that use is the idea that Euclidean geometry approximates small-scale physical geometry quite well, and/but the idea that we can more-or-less deduce heights by means other than raw measurements completely amazed me at the time...

I suggested back in MESE 11836 the following example from RL Wilder: 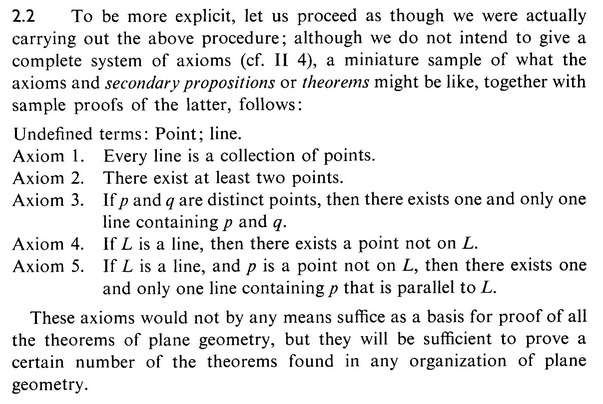 With regard to the question here:

You could have students begin with the axioms above, but then add an additional axiom about the number of points. Assuming that the number of points is $n < \infty$, it is possible to prove that $n$ must be a perfect square. So, you can create various models that satisfy these axioms with different numbers of points. (I gave an even earlier answer in MESE 2528 showing how to satisfy these axioms with a nine point model consisting of cards from the game SET; note that, indeed, $9 = 3^2$.)

If you dig deeply enough into writings about philosophy [of mathematics], then you will find there are differences in whether individuals believe things to be "infinitely divisible" (e.g., wikipage). So, the question of how many points there are in reality is somewhat reasonable.

Returning to cases in which the number of points is finite, you could have students tack on an additional axiom about the number of points being some perfect square, and then ask whether they can construct a model satisfying these axioms - and, if so, follow up with questions like, "How many total lines are there?"

I think (counter to some others) that this is indeed a useful thing to introduce and talk about. My personal opinion is that it's something of a shame/outrage for anyone to go to college and not ever hear about what a "theorem" is. Currently I have a 2-slide talk on the axiomatic method on the first day of any of my college courses, including (especially) remedial algebra and prealgebra. My take-away line here is: "The goal is to reduce the facts that must be taken on faith, or from authority, to the smallest number possible."

I don't try to model toy axiomatic systems or get students at this level to prove abstract relationships. But I do expect them to be able read and understand explanations from first principles. I work the terminology into what may seem like nigh-trivial results, e.g.:

I actually get some traction out of this. Without getting too elaborate or side-tracked, the students can actually have a reasonable conversation about the definition/theorem/proof process in mathematics, not be intimidated by it, predict what's coming next, and frequently thank me for it. Personally I think that's a big win.

Not the answer you're looking for? Browse other questions tagged secondary-education axioms-foundations or ask your own question.

25
How to present $\Bbb Z/n\Bbb Z$ to highschool level audience
8
Is there a toy example of an axiomatically defined system/ structure?
13
Wiggins' question #12

13
Interacting with high school teachers (US)
29
Is Euclid dead? or Should Euclidean geometry be taught to high school students?
24
Is there a Piagetian age at which proofs can be comprehended?
15
How to teach affine geometry to future high-school teachers?
5
Self Teaching Theory for Olympiad. Need advice
14
How the real numbers are taught?
11
How to teach a student algebra who misses too much previous knowledge?
3
Introducing quadric surfaces in high school
1
Topics for undergraduate seminar for mathematics educators