Venn diagrams have got to infiltrate the modern curricula as a way to explain probability theory, discussing sets of events. Not surprising, and we can say that they never left us really in topology and other usages of the lattice of union and intersection of sets.

Now, I have recently noticed that they are being used also for a different task, the analysis of factors of integer numbers and polynomials, and the subsequent calculation of the greatest common divisor and least common multiple.

In fact there are two different usages here: simply to represent the set of divisors of two numbers A and B and its intersection, $A \cap B$ or directly represent the aggregates (?) of prime factors of A, B and its gcd, $A \wedge B$. The first way is very in the spirit of New Math, but in order to be able to expose the LCM it needs, I believe, to use $AB=LCM \times GCD$.

The second way is more explicit, one gets the LCM, as $A \vee B$, by multiplying all the factors in the diagram and the GCD by restricting to only the "wedge" part of it. 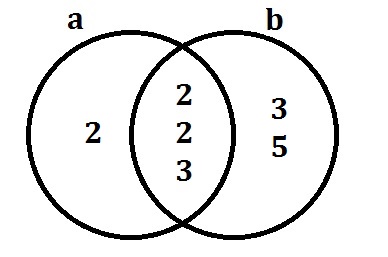 But we can not see the factors as elements of a set, because of course we can have repeated factors. The problem appears when we remember that the number of subsets of a set is $2^N$, but the number of divisors of 12 = [2,2,3] needs of course to account for the repetition.

Still it looks, this second way, an useful representation and I am tempted to use it. The caveats are:

I have a worked example on MSE here in which I cite (RE: your comment on pointers to articles):

Check out that paper (if you can gain access) and its citations; specifically, you may wish to investigate work by Zazkis and Campbell (google scholar).

I do not see any issues with students conflating the use in probability with the use for factors: it is simply a way of representing what is unique to individual numbers (with regard to their factors, or in some approaches, their prime factors) as well as what is shared by the numbers (specifically, their greatest common factor).

I think that Venn Diagrams, like all tools, are not intrinsically good, but rather only as good as they are used in practice. I happen to like them as tools for working out the LCM or GCF in cases where a non-routine problem has been posed; you can find an example in a paper I co-wrote with B Sriraman:

Section 4 in the aforecited/aforelinked discusses exactly how one can broach non-routine problems around LCMs, and includes (for example) the observation that one can draw a 3-Venn Diagram to represent the LCM and GCF of three whole numbers.

I close by wordily indicating how I think about LCMs in (at least) the k12 context: When I am looking at a list of whole numbers and trying to compute their LCM - and this can arise, e.g., when adding up fractions with different denominators - I think about each whole number as telling me what prime numbers I need to include. Specifically, I go through each number under consideration and look at their prime factors to see whether I can form the requisite numbers. Here is a fully worked example for how I would complete the task of finding the LCM of the first ten positive integers:

$1$: All whole numbers are divisible by one.

$6$: Since its prime factorization is $2 \cdot 3$, all of which I already have, there is no change to my candidate for LCM.

$10$: Since its prime factorization is $2 \cdot 5$, all of which I already have, there is no change to my candidate for LCM.

This approach clarifies in my own thinking how the LCM is a multiple of each number (it contains all the prime numbers to their appropriate powers necessary to make each number) and it is the least such number with this property (it contains nothing superfluous: a common error in the above worked example would be to take the product of all ten numbers).

Perhaps worth emphasis is that the use of prime factorizations (either directly or implicitly via (multiset) Venn diagrams or exponent vectors) may actually obfusctate the essence of the matter. For example, lets solve the problem linked in Benjamin's answer without using prime factorizations but instead using gcd & lcm distributive laws to pull out and cancel a common factor $12$ from $A,B$. Namely using $\gcd(A,B) = \gcd(12a,12b) = 12 \gcd(a,b),\,$ and similarly for $\rm lcm,$ yields

$$ \gcd(ca,cb) = c \gcd(a,b)$$ and similarly for $\rm lcm$. Solutions using prime factorizations or Venn diagrams are essentially doing the same thing, but the key role played by distributivity is highly obfuscated from that viewpoint. This is pedagogically detrimental because such distributive laws are fundamental, so this innate algebraic structure should be highlighted - not obfuscated. The solution of many number theory problems works the same way as above - exploit distributivity to cancel out a common factor so reducing to the simpler case when $a,b$ are coprime (so their lcm = product). One will be at a great disadvantage if one is forced to rediscover this distributive structure every time in terms of Venn diagrams vs. simply invoking well-known fundamental gcd laws.

Thus if you use Venn diagrams or similar devices, strive to also teach the more algebraic approaches using basic gcd laws so that students will obtain a better grasp of the algebraic essence of the matter.

16
Research supporting "recipe-style" calculus in senior high school?
4
Continuity of classes split between different days
14
Resources suitable for a beginners' course with exponentials
8
Problem based learning (PBL) for pupils with educational difficulties
4
In preparation for exams: question bank or questions with omitted particulars?