Ought color be used more in math?

Is there any research that substantiates the helpfulness of using colour in presenting math?

I'm not asking about practical drawbacks of using color, like increased printing costs or harm to the visually impaired.

There is a fairly old article by William A. Ewbank (from 1978) in which the author argues that more colors should be used when teaching mathematics. Moreover, the references therein might also be interesting to you.

Busy pictures hinder reading ability in children, according to study at Carnegie Mellon University. They find that an overly busy page with extraneous images can draw the reader's attention away from the text, resulting in lower understanding of content.

I would argue the same is true for math: colors can give false impression about properties of objects like geometric figures, especially if they are presented using the same color again and again, like squares are always green and triangles are always red, etc. Using colored objects may also train the students to dismiss anything that is not colored, like on the image below, where is a triangle? Color may make unimportant attributes seem important.

There are standard symbols that must be learned by students — and teachers — that allow to indicate, for example, that two angles are congruent or not, or that two lines are parallel or that two values are equal.

The dumbing down of textbooks have been going for at least three decades. Meaningless pictures supposedly make textbooks "livelier". Adding color to formulas and geometric drawings strives for the same "math is fun!" spirit.

A textbook is not a fashion magazine, and students would be served better if they were presented with coherent text and clear and simple illustrations with no egregious mistakes.

Here is a portion from Core Plus Mathematics I with colored squares. The book mentions the Pythagorean Theorem, but does not prove it. Instead it asks students to calculate area of the squares and of the triangle, thereby, supposedly, asserting the correctness of the theorem. I wonder how the students are supposed to find the sides of the squares built on the hypotenuse — just by measuring it with a ruler? If yes, why the dotted grid? Cannot use it anyway. 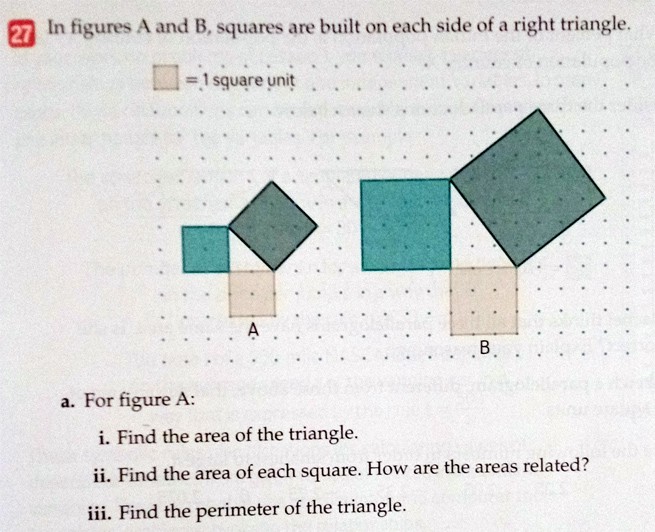 Not research but some thinking, too long for comment:

I have seen the use of "4 color" graphs (it's 2 colors with shading, and one of the colors is orange, thus really one extra printing color over black ink) in 1980s Thomas Finney for graphs and especially solid structure pictures (e.g. rotations of solids). They touted it as beneficial, but I have also seen the practice criticized for cost. (but it's not like color photo plates). In general, there is much less need for it in math compared to other subjects where it really does help (e.g. biology, chemistry, history, or especially art history). I suspect most places it is not needed, but it will help marginally in showing certain graphs.

Also, in statistics (or really data analysis), there is a benefit to colors used in bar charts or line charts or the like with multiple data series.

I don't see much benefit to the use in equations from the other question. Probably get clearer emphasis with curly brackets underneath or something like that.

39
What does math education research know about difficulty vs. effectiveness?
29
What Math(s) Ed literature is accessible to the working math(s) educator?
9
Studies which compare students with and without math training
19
Is algebra really the gatekeeper to higher math, or is it multiplicative reasoning?
11
Typical rate of success in junior or senior level math courses at US universities
2
Math Education Research Areas
5
Is there a study that proves that math proficients usually perform better in other subjects vs. people who perform shoddily in math?
10
Adult Learners Returning to College Level Math
4
Conferences dealing w/challenges of teaching higher level math to STEM audiences
4
Is there a widely respected early childhood math curriculum?