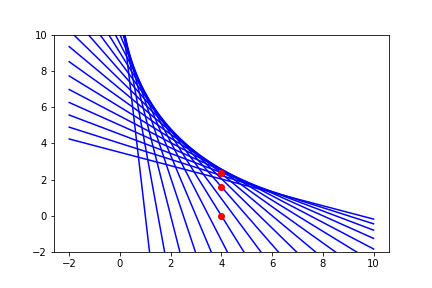 Given a map consisting of a few different terrain types (maybe: field, forest, piecewise straight road), and a movement speed along each one, what is the fastest way between two given points?

You can adjust the map to increase difficulty, or add in curved roads, continuously changing speeds or direction-dependence via elevation to require more advanced mathematics. Add obstacles (building, river) to investigate non-continuous functions.

6
Encourage Students to solve problems at class
6
Looking for realistic applications of the average and instantaneous rate of change
10
Everyday Example Problems for Solving Linear and Quadratic Equations
42
Teaching undergraduates who expect a high-school-like learning environment
35
How can I help a student who has a "wrong" kind of enthusiasm?
4
Recommended list of things calculus students should be required to memorise?
8
Studies on more simple problems, or fewer difficult problems?
7
When working with 12-16 year olds, how should I graph functions when the domain technically isn't $\mathbb{R}$?
39
Big list of "interesting" abstract vector spaces
7
Nice examples of limits to infinity in real life