Is the constant term a coefficient?

I'm a baby boomer who was taught that the constant term of a polynomial is a coefficient, being the constant factor for the x^0 term.

Current text books are vague on their definition of coefficient, but, when they ask for a student to list all coefficient in a given polynomial, they do not include the constant term in their answer keys.

The Kahn Academy video on the topic does include the constant term as a coefficient, as does the related Wikipedia article.

Further, if we are talking about natural number constants, isn't each digit, including the ones' place, a coefficient of a power of 10? We don't segregate that digit by calling it something else; it's a digit similar to all the other digits.

Isn't mathematics supposed to be non-arbitrary and consistent?

Is this going to be yet another contributor to generational divide?

Your question is kind of two parts: one about a convention

Is the constant term a "coefficient"

and one about a philosophy, which I perhaps find to be a more important question to answer.

Isn't mathematics supposed to be non-arbitrary and consistent?

Different fields of mathematics have different conventions; this can lead to some mathematicians using "sigma" for "standard deviation" in statistics and other mathematicians using "sigma" for a map defining a simplex in algebraic topology, and others using it to represent a group element in a permutation group. Even more egregiously, some people consider "Natural numbers" to include zero, and others consider "natural numbers" to be only positive integers. Even in higher mathematics, the definition of a word, or the statement of a theorem, may differ slightly between two textbooks. What is important is that 1) their definitions are clearly stated when they are introduced, and 2) that when a single mathematician uses the word in one body of work, that they are consistent. We are capable of handling the fact that different texts have slightly different definitions of what, exactly, a "coefficient" is, because we know how to interpret mathematical definitions and classify objects according to whether or not they fit that definition. That skill -- determining whether an object satisfies certain properties, or classifying mathematical objects based on definition, and recognizing properties of objects satisfying a particular definition -- is often an unstated goal in teaching mathematical vocabulary.

In that sense, I do not think that the definition of "coefficient" needs a universal definition for schoolchildren. When we teach students the meaning of mathematical words, the intent is often to build in them the ability to think about different "parts" of what they are learning and clearly articulate their thinking mathematically. In this sense, teachers and students being consistent with themselves and their textbook matters. However, being consistent across different states, or even different school districts, seems unimportant. Ultimately, they may grow up and realize that what their school called a coefficient differs slightly from what their college called a coefficient. This realization may help them understand the importance of an "operational definition" in many contexts!

I have to admit I was skeptical of the OP's claim that contemporary textbooks do not identify the constant term as a coefficient, so I checked the first book that I had handy -- and indeed it does seem to be the case, in at least my sample of 1. Here is some evidence: 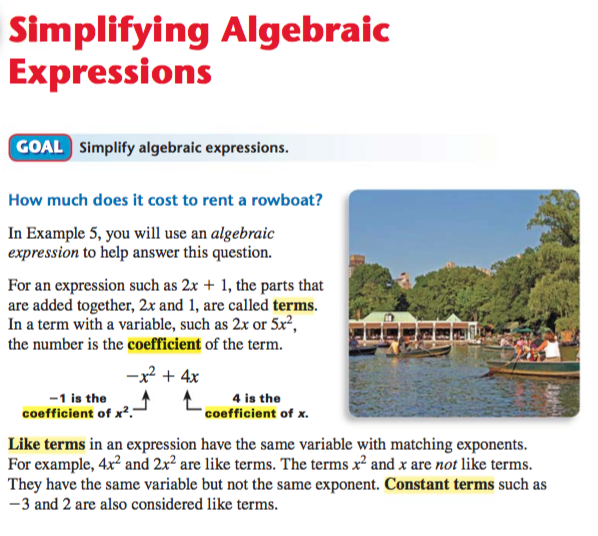 Note however that 2004 precedes the Common Core by about 6 years, so this cannot be laid at the feet of the CCSS.

Let's keep in mind that "mathematics" and "mathematics education" are different subjects. This question brings forth this distinction. At one end of the "Piaget" spectrum of mathematical stages of development, explaining that the constant term $c$ is the same as $cx^0$ might be too much cognitive overload. However, towards the other end of the spectrum, say in calculus, the construct $\sum_{n=0}^N c_nx^n$ needs to be a primary object.

Not the answer you're looking for? Browse other questions tagged secondary-education terminology common-core middle-school polynomials or ask your own question.

16
Should Eisenstein’s criterion be taught in high-school?
2
Definition of root of equation/expression
14
Why is polynomial factorization over the integers part of secondary school curricula?
2
Explicit Cross Method
10
Is short division taught these days and if not, why not?
20
Why do we teach the Rational Root Theorem? (high school algebra 2)
58
Is there a virtue to learning how to compute by hand?
6
Why do we write $x$ instead of $1x$?