How to explain angle hunting to students

$I$ is a point of the circle of diameter $JK$. The perpendicular bisector of $JK$ cut the semi-circle not containing $I$ at $M$. Let $N$ and $P$ be the orthogonal projections of $M$ on $IJ$ and $IP$. Prove that $\angle JMN=\angle PMK$. The next question asks to prove that $JMN$ and $KMP$ are congruent. 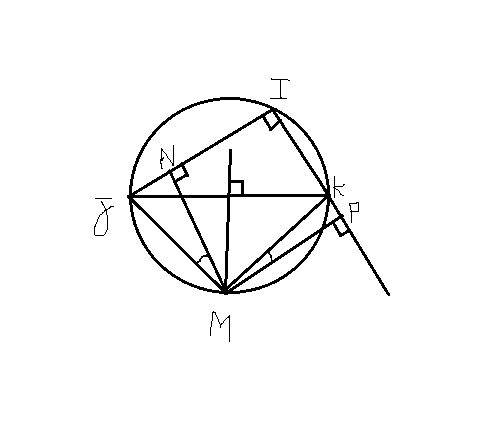 Maybe there's a shorter way in this case but how can I simplify angle chasing for students?

There can be no standard algorithm to solve angle hunting problems. You have to build this skill in students by exposing them to simpler problems and gradually increasing the complexity. I suppose the difficulty of these problems can be guaged by the number of properties/constructions required to solve them completely.

The key thing is to begin by working backwards i.e., identify the triangle containing the missing angle. From there keep working your way backwards trying to find the other missing angles or their sums. Some of the properties that could be used in doing this are (not necessarily in the order of difficulty):

The list can't be exhaustive and the properties really depend on the level of students. As I said in the beginning these are open ended problems which can be mastered only through practice. Start with easy and move on to complicated problems.

13
Interacting with high school teachers (US)
19
How to explain that we live in a three-dimensional world?
11
Rigorously defining the concept of an angle for high school students
6
Should one justify formulae in middle school?
7
Rules to eliminate erroneous solutions in Trig equations?
8
How do you explain straightness to a 5-year-old?
6
Why do standard geometry textbooks not start with trigonometry?
28
How to give my students a straightedge instead of a ruler