How to explain fractions to 7 year old kid

Any ideas or any books I can buy which can help me to explain this?

Comparing fractions only works when the whole is the same size. Here's a few examples to get help the 7 year old understand what happens when things aren't the same size:

By showing the examples the 7 year old will start to understand that comparing fractions is can only work if the wholes that you take the fraction of are identical.

Typically, it is better to introduce mathematical ideas after the need for that new idea is obvious. For example:

Challenge them to show and assess all of their work according to three main criteria:

Ensure you compare and contrast whole numbers vs fractional numbers. That is really the heart of the matter - that fractions are numbers, most of which are used to name quantities between consecutive whole numbers.

Bonus criteria and tasks can include:

Eventually you can guide them toward the situations of 2 kids sharing one unit of food vs 4 kids sharing 2 units of food. When they have to name the amounts, you can show them the amount of food is exactly the same and then show them that even the cuts can be the same.

7? I work in the math dept at a local high school, and students 14-18 struggle with fractions.

I'm a fan of the circular pizza cut into 8 equal sectors. It makes discussing fractions easy for any student, as the fractions 1/2, 1/4, 1/8 are right there. Similar to the money discussion, you can start with what 1/2 means, and how 1/2 of 1/2 is 1/4, and then go into the above explanation of how the whole is our 8 slice pizza. When we ask "how much pizza would you like?" it's essential to know how much is there to begin with. 1/4 of one pizza is not the same as 1/4 of the 10 pizzas I bought to treat the class at year end. As far as 1/2 vs 2/4 is concerned, the answer is right there, they are both the same 4 slices of our standard 8 slice pizza.

In both cases, money and food lend themselves to divisibility. And having them right there avoids the issue with things being too abstract. Even in high school, I find that numbers and variables create a struggle for some students, and the faster I can move the conversation to solid objects or real life examples, the easier they get it.

OP (@NotAgain): "Any ideas or any books I can buy which can help me to explain this?"

May I suggest games (rather than books)? For example, BrainPop's Refraction: 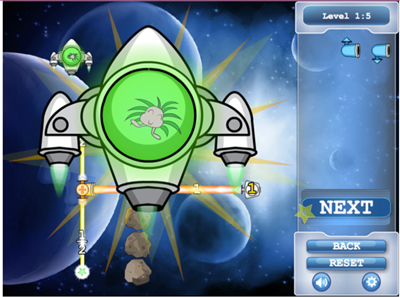 Or the Fraction Game: 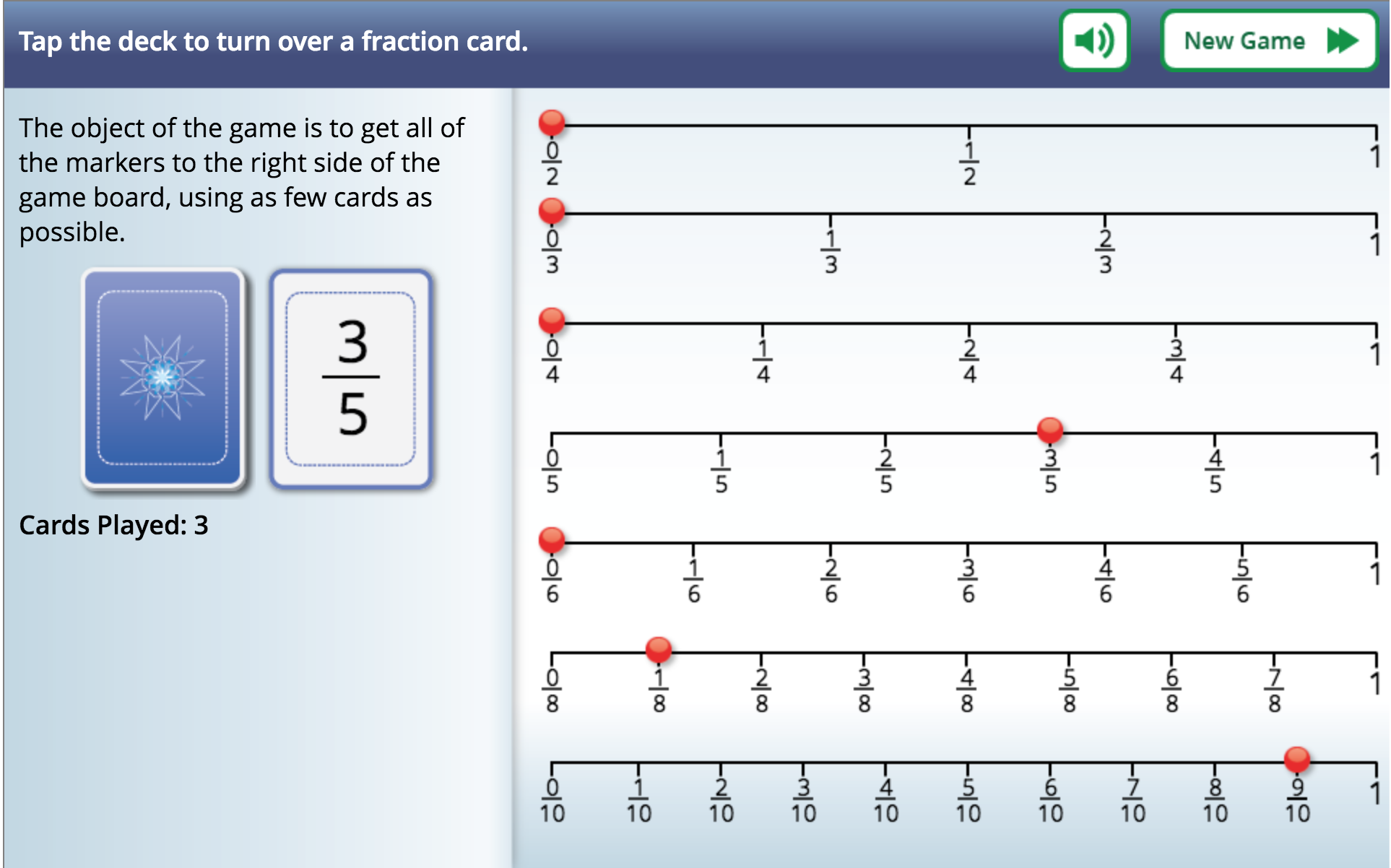 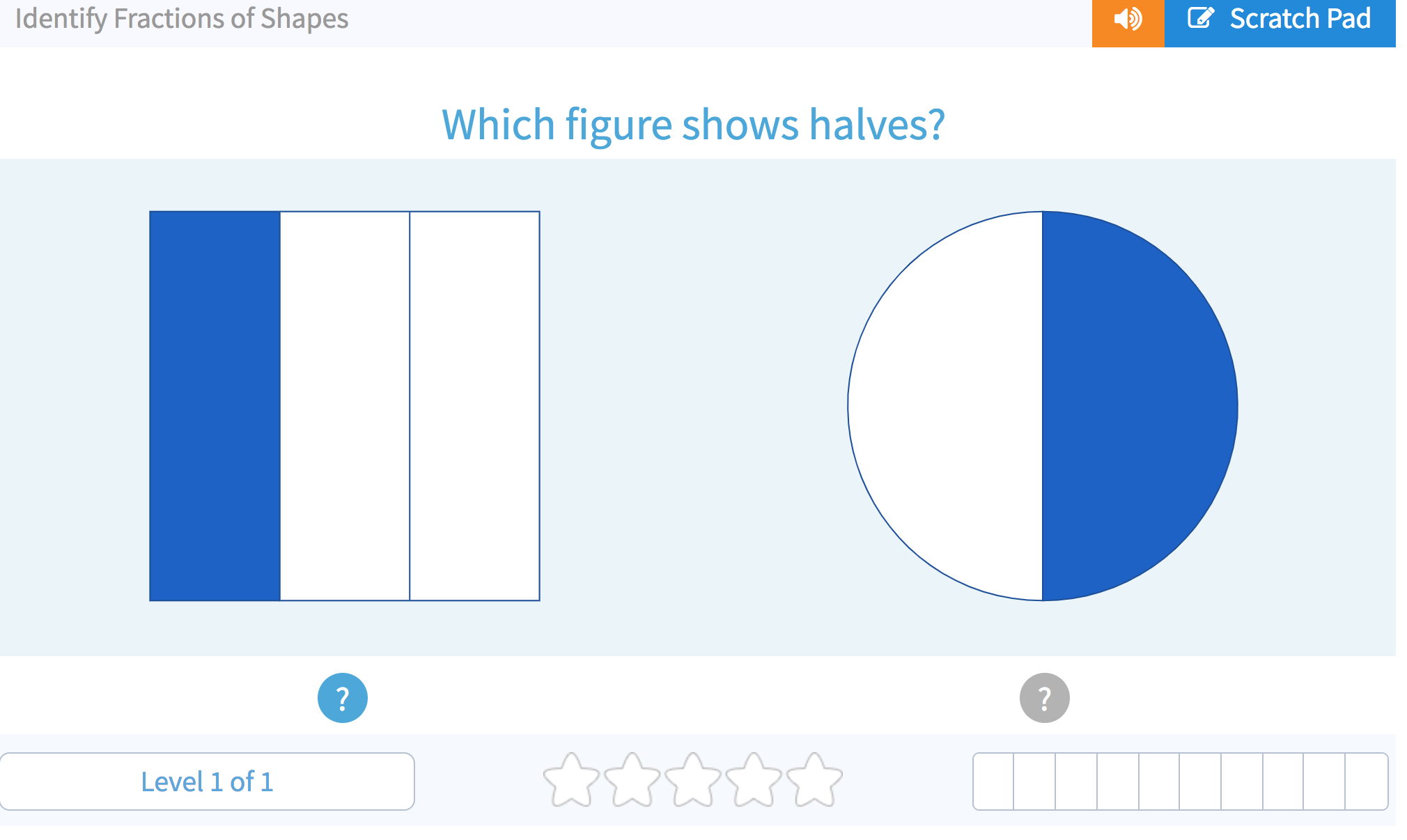 I think this is the current locus of creative ideas, not books.

With regard to this question:

Any ... books I can buy which can help me to explain this?

Here is a specific book recommendation, which is a source that I have personally found helpful:

Here is the table of contents: 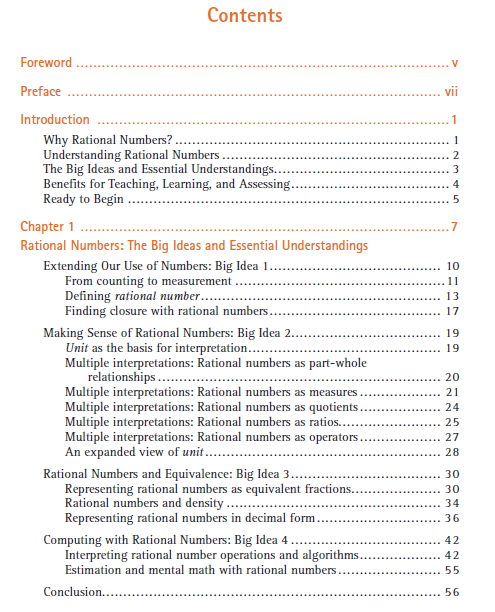 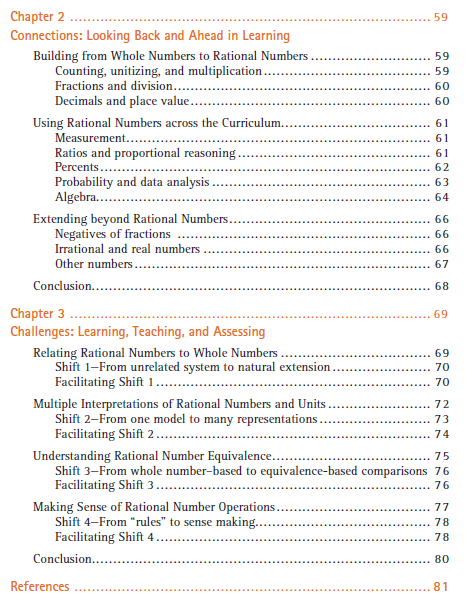 This becomes somewhat more apparent in words. I have three quarters of a pie.

But you have to take it a step further: A fraction needs a prepostional phrase: It's always a fraction of something When we go abstract, the something can be thought of as being just 1.

When you are doing these, you can lay them out in rows and arrays.

An array of 3x4 m&m's with one row being yellow:

What fraction of m&m's are yellow. Four twelfths.

Divide into columns each with 2 browns and a yellow.

Are the columns the same?

What fraction of the column is yellow?

Play with this for a while. At the end let him eat the manipulatives.

If you are on a no-sugar regime, coins, cards and poker chips also work.

Note that this prepositional phrase requirement is what gets people screwed up with percents.

"The incidence of measles fatalities has risen 70% due to anti-vaxers" Sounds like an epidemic. But when you find out that it went from 10 to 17 out of 60 million kids it's not as alarming.

You can illustrate this with a puzzle:

WHERE's my other 3 bucks!

For kids, I always use the pie (or pizza) example, cutting it into pieces. This way it is very visual and easy to understand that 1/2 is the same as 2/4.

With the fraction program you can do any "cutting" of a circle interactively. Just set 1/2 and then 2/4. (Disclaimer: I am the developer of the website, it is in German.)

Following an example how you can do n out of 4 with a pizza: 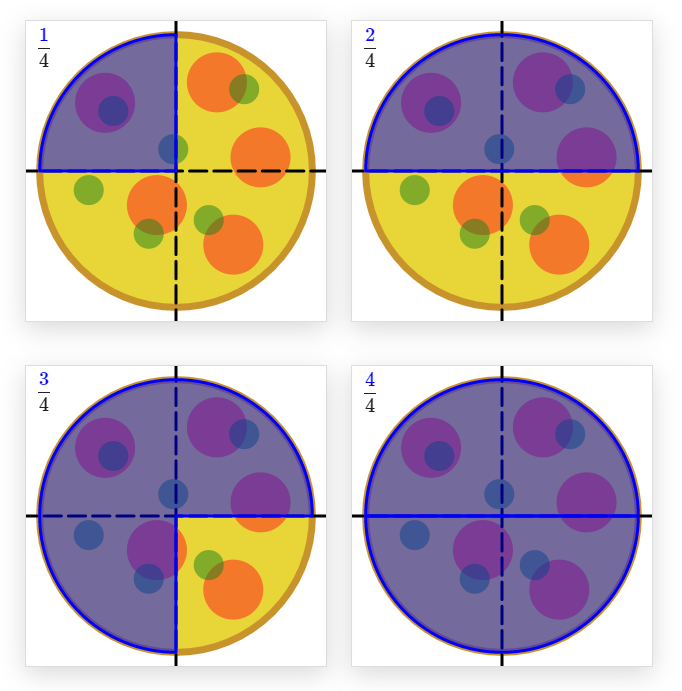 7 years old seems quite young, so my answer is not specifically thought for this age (it is much inspired by a recent twitter thread about these questions for 12 yo), but I hope it can still help.

The example you give shows precisely how using "real world" interpretations can be misinterpreted, therefore I do not think that coming up with more real-world interpretation helps (such interpretation are needed in the course of learning fraction, but they are in my opinion not the solution to your particular problem).

What seems is missing is the very meaning of the symbols $\frac12$, $\frac24$. First and foremost : $\frac12$ is a number, not an operation. This is a common belief that needs to be dispelled, but is very understandable given the way we write. In your example, $\frac24$ is interpreted by the pupil as "2 out of 4", which it is not. I think that it might actually be easier to stick to the maths here in order not to confuse these things.

So what is $\frac24$ ? By definition, it is the unique number that, when multiplied by $4$, gives $2$. Nothing less, nothing more. You can lean on the relative integers to explain this:

"Do you remember that we could not perform the operation $3-5$ at some point, because we would have needed a number that, when added $5$, gives $3$? And we only had non-negative number, none of which would do? Then we introduced new numbers, e.g. $-2$, that yields solutions to such problems. Here it is the same: with only integers, we cannot find any number which, when multiplied by $4$, would give $2$. So we just added numbers to that effect, and denoted them with this somewhat weird notation that, you'll see, will prove very convenient in computation."

Note 1. If you have not yet dealt with negative numbers, maybe it would be easier to do so first. You can use level buttons in an elevator for concreteness, find this much better then the usual money/debt considerations.

Note 2. This is a fantastic opportunity to recall that the division operation is performed by actually solving an equation.

Now, how can one see that $\frac12=\frac24$? We should use the definition, and e.g. look at what happens to $\frac12$ when we multiply it by $4$. Its own definition only says what happens when we multiply it by $2$, so let us use that $4=2\times 2$ to observe that multiplying $\frac12$ by $4$ is the same as multiplying it by $2$, and then multiplying the result by $2$. By definition $\frac12\times 2 = 1$, so that $\frac12 \times 4 = \frac12\times 2\times 2 = 1\times 2 = 2$. Now by definition, the number that, when multiplied by $4$, gives $2$, is $\frac24$. So $\frac12 = \frac24$. That seems long and hard only because it is very detailed; this motivates the learning of computation techniques that will simplify these kind of reasoning and "factor" them quite a lot. Because we are used to these computations, we easily forget where they come from, but they need to be grounded in the definition in order to avoid them being merely magic formulas.

Other erroneous conceptions that will probably need to be dispelled along the way:

7 years old is not too young to draw fractions and think about them. I am slightly biased as I work specifically with the "gifted and talented" population (whatever that means... ). The best method I have found is to draw circles and chop them up. Denominator means "De-number of equal parts" and also Denom=DeName of the fraction. "nom" is name in latin. Also, I have found that Denomnomnom is particularly appealing to 7 year olds. Especially good for getting giggles if you are working with fractions that look like pacman or if you are using pizza as an example. 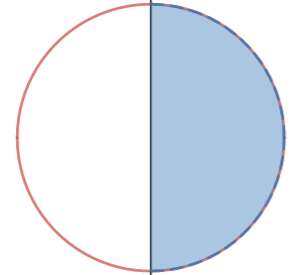 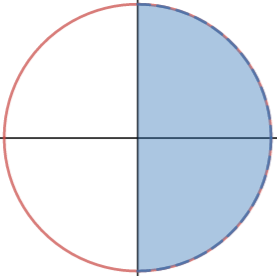 $2/4$ but because the shaded section hasn't changed: we haven't changed the amount.

Keep chopping up the fraction to discover that $4/8$ths is equal. We just need to bare in mind that the parts need to be equal and the denonominator represents the number of equal parts and the numerator is just the number of shaded parts.

Bonus points if you can include pizza in your explanation. I haven't met any 7 year olds that don't like pizza (this could be an observational bias on my part...).

Not the answer you're looking for? Browse other questions tagged primary-education fractions or ask your own question.

52
Should we say that fractions "are" or "represent" numbers?
30
What is the rationale for the absent (+) in mixed fractions?
19
Are fractions hard because they are like algebra?
9
1:1 iPads for K-3: how can an educator accommodate student(s) opting out?
11
How can I teach the concept of before and after a given time
3
How do you explain the whole integer and fractions subject to a kid in 6th grade?
6
How do I convince my teachers that a book on maths must focus on conceptual understanding?
5
Sensible amount of repetition 7 year old
6
At what grade/age levels do students in Florida/USA stop using mixed fractions?