"Amplitude" of Tan and Cot functions

The amplitude of a sinusoid is the distance from its axis to a high point or a low point.

When we read this, it follows that Tan and Cot don't have an amplitude. Nor do SEC or CSC. Now, I'm in an odd situation. (Note, I work in a high school, and function as an in house tutor and occasional sub). The trig classwork is using this term as in y=2tan(x) for example. The students would be asked to identify the 2 as the "amplitude".

Given my relationship to the teachers, I am there to support them, not criticize them or appear a threat. And I am at the point in my life where I don't need to be right or adhere to the past (Like what happened to the septagon? It worked well, and fit into the series sept, oct, non, dec.) The question is -

Am I doing damage by using non-standard terms with my students? In the same manner that I talk about 1/0 not equalling infinity, but rather, as the angle approaches say 90 degrees, Tan approaches infinity, do I need to awkwardly say "what your teacher calls 'amplitude'" / "The 'A' term in this equation" and not feed into the misnomer?

I can use the term intelligently with no sarcasm if needed -

When we look at TAN and COT, we see the parent functions have 2 points, tan(45)=1 and tan(-45)=-1. A translated function would see these points shift vertically, so the difference in Y value is consistent, twice the new amplitude. Similarly, when graphing SEC/CSC, I am ok to identify the space between the graph segments as twice the amplitude. All in the spirit of not going against what the teachers are choosing use as a colloquialism.

Edit - an example, for context. 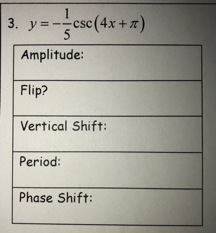 This was from a worksheet. Which was from the section of chapter that specifically was beyond SIN & COS. To be clear, if it had all the trig functions, I'd put the amplitude for SIN and COS and N/A for the other 4. As of this moment, I don't know if the teachers created it, or if this was from a third party.

I used to teach my PreCalc students an early unit on the Function Toolbox.

My point is that the constant that is traditionally called amplitude in trig class actually does something more general, and to a ton of functions, even to those with asymptotes.

I think I fall on your side when calling it “amplitude,” but would love students to know what $2f(x)$ does to $f(x)$, regardless of the function.

This looks to me like a balance between two concerns:

Suppose the teacher, Mr. Flample, wants to call the coefficient of a cosecant function the "flamplitude." You have two choices of what to say to the student:

This is not a subtle distinction, nor is it a difficult choice.

Choosing the first option is actively giving the student a reason to disengage from the class. That's bad for the student. Don't help students develop excuses to not learn mathematics.

The other teach is wrong. But since you are in a support role, I would just ignore it and roll onward.

Surely there are a bazillion other things to work on, to help the kids with. It's not like 50% of your time is on this wrong amplitude.

If it still bugs you the wrongness, you could say something like "I don't know amplitude so well--have Mrs. WrongAmp help on that one. Just circle it and move on, kid. I'll help with next problem." That way you don't endorse the wrongness or tie yourself in knots promulgating it. But you still move along and do something useful. And don't make students lose faith in WrongAmp lady.

Not the answer you're looking for? Browse other questions tagged terminology trigonometry or ask your own question.

8
Unit circle vs. ratios of right triangles vs. wave functions for introducing trig functions
8
Examples of when $\tan(x) = \frac{\sin(x)}{\cos(x)}$ is useful
17
How to convince my student that this is an Identity : $\sec^2x-\tan^2x=1$?
7
Rules to eliminate erroneous solutions in Trig equations?
8
Applying inverse trigonometric functions
8
May we permit identities to be established by equivalent equations?
3
The term "unique" for functions and operations
5
How to intuitively understand how the trig ratios are calculated
7
Phase shift vs. horizontal shift, and frequency vs. angular frequency in sinusoidal functions