I am developing an assessment piece where the content is the same but the particular numbers are different for each student. It involves finding Triangle Centers given points using coordinate geometry. The particular skills it is assessing (for/as/of) are

I am giving each student different randomly generated vertices and asking them to work out 4 triangles centres graph the results. As I've written it is quite guided with the main tasks being calculations between suitably chosen points and graphing. I'll be generating individualised answers as well. See below for a draft.

(I am using Mathematica to generate the initial points and answers including graphs. I export these to Excel and mailmerge them in Word. ) 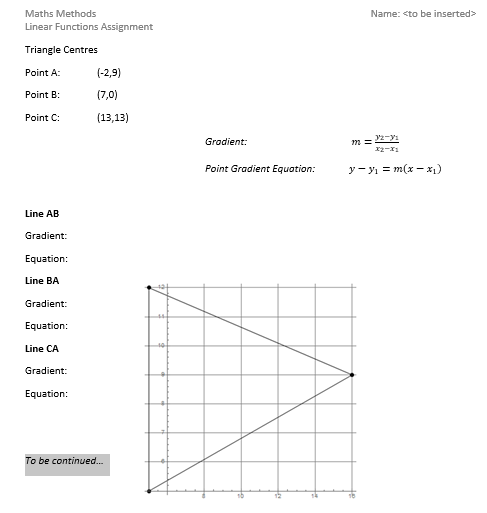 What are the pedagogical issues at play? References welcomed! My own ideas are shown below. I am not so interested in the technical issues involved (Google "latex random test").

I have particular objective in mind for this project at this stage (paper based, an activity not a test, papers should be of the same difficulty, I like this triangle centres task), but there are some obvious extensions (other maths content, differentiation, automated marking).

Update Having run this in highschool class the main feedback I got was that it was too challenging for most. The most important pedagogical thing which emerged was the need to differentiate. To modify the task to make it easier one could:

Both of which require more work for me! Hence, it is "difficult to create individualised questions, needs a thorough understanding of the problem and its algebraic solution."

This is great in principle, but the question in my mind, based on your sample, is what would be the intellectual content presented by one student to the other. Because the problem is stylized and you're generating a lot of them, the danger might be that your students would infer that the important thing here is to learn to execute an algorithm, without any conceptual understanding. So maybe student A succeeds in getting the right answers to their problem, based on a model you did on the board. Then student A shows their scratch work to student B, who works through the same algorithm with their numbers.

Now you could say this is fine, and they've successfully shared a skill. A has helped B to learn. But it may be that they don't understand the concepts, and therefore their mastery is basically fragile and useless. All they know how to do is fill out a worksheet with exactly this stylized form.

I definitely see this happening with physics students at my school, where some of the teachers use a commercial answer-checking system provided by the book publisher. Many students pay for a monthly membership with a sleazy web site called Chegg, which provides them with worked solutions to all the problems. The numbers are different, but the students just work through the steps with their numbers. They don't understand what they're doing, and their skill doesn't generalize to other problems.

What has worked better for me is to take the time to write problems that are actually qualitatively different, and then randomly assign different problems to different students. Here are two problems I assign that basically use the same skills and are at comparable levels of difficulty, but differ from each other in qualitative ways:

This particular pair of problems is actually from a set of 5. So certainly a couple of my students can get together at Starbucks and work on their homework together, but it's unlikely that they were both assigned the same problem. Therefore if they help each other, they are more likely to be giving help at the conceptual level, not the algorithmic level. One student can't just walk through the other student's algorithm.

Here are some problems I have run into:

Not the answer you're looking for? Browse other questions tagged mathematical-pedagogy reference-request technology-in-education general-pedagogy assessment or ask your own question.

4
What is a good reference for (this way of) generating a logarithmic scale?
5
Exam Writing: Combining Topics on Exams in New Ways
42
Teaching undergraduates who expect a high-school-like learning environment
25
Inability to work with an arbitrary mathematical object
13
Is higher-math pedagogy responding properly to Wolfram Alpha's existence?
12
Quizzes (with questions known in advance) instead of homework in a graduate mathematics class. Good Idea or Bad Idea? Pros and Cons?
7
Acceptability of creative questions in assessments
11
How, now, shall we teach math online?
5
Appealing thinking games, that are easy to make; easy to learn, and easy to play
20
Why do we teach the Rational Root Theorem? (high school algebra 2)