The companies that run these expensive abacus programs for children claim it has all kinds of benefits for their mathematics abilities and speed. Apparently it starts with a child learning the mechanics of using an abacus, giving them practice in doing so, and eventually, the child is thought to visualize an abacus in their head, as a "mental" abacus.

I don’t doubt that some kids doing Soroban classes do manage to do very fast arithmetic tasks when strings of numbers are thrown at them. But I don’t know if it’s worth doing, other than for speed in calculations.

However, it is not widely cited at all. I do not know the landscape of education journals well enough to know if the journal is of high quality. I checked the Finnish publication forum, which has rated the journal as scientific but not exceptionally good since 2017.

Furthermore, one would expect any engagement with mathematics to lead to improvement, so a pertinent question is if this method leads to more improvement than other activities.

The conclusions section of the article refers to other studies that might be of interest in answering the question.

"The companies that run these expensive programs" just want to make money. Some sell \$1B worth of iPads, other sell abaci.

Do your school budget a favor and get an abacus at Ikea for \$10. It has horizontal wires with ten beads on each, which is similar to Russian-style abacus. The wires are not curved, and the colors are just for fun not for easier grouping, but it is good enough to teach decimal system and place value. Ten beads on a wire may seem excessive — you need only nine — but come handy when you want to break a higher-place value into lower one, like breaking one thousand into ten hundreds. This abacus is much closer representation of decimal system than soroban — one wire is one decimal place.

Adding and subtracting is simple. Multiplication is more involved. Division requires some mental math, which itself can be a good reason to refresh multiplication table and division shortcuts. I think if you just explain how addition and subtraction works, that would be good enough return for your \$10.

This is a fun short story by Chekhov about a high-school tutor failing to solve a middle-school problem that the merchant father of the middle-schooler solves in seconds using abacus (called counting board in this translation). The problem can be solved arithmetically and algebraically, and the merchant solves it arithmetically, cannot do a system of equations with abacus. 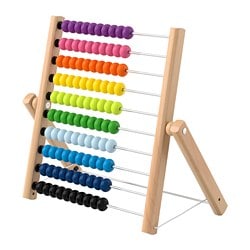 I took abacus classes when I lived in Japan for several years as a child.

It was interesting because one learned a mechanical way of solving arithmetic problems, but I didn't learn "number sense" which was much more useful later on in my academic career.

I think my experience meshed with Richard Feynman's conclusions in his excellent story Feynman vs. the Abacus.

How did the customer beat the abacus?

A few weeks later, the man came into the cocktail lounge of the hotel I was staying at. He recognized me and came over. "Tell me," he said, "how were you able to do that cube-root problem so fast?"

I started to explain that it was an approximate method, and had to do with the percentage of error. "Suppose you had given me 28. Now the cube root of 27 is 3 ..."

I realized something: he doesn't know numbers. With the abacus, you don't have to memorize a lot of arithmetic combinations; all you have to do is to learn to push the little beads up and down. You don't have to memorize 9+7=16; you just know that when you add 9, you push a ten's bead up and pull a one's bead down. So we're slower at basic arithmetic, but we know numbers.

All that being said, I'm glad I learned it, but it's useful now mainly as a parlor trick. I also demonstrate how to multiply with a slide rule! And it was interesting when I lived there to watch shopkeepers sum up checks.

I have been learning soroban on my own and find that it uses a totally different part of the brain than doing the sums and subtractions on paper. I read somewhere that it uses the part of the brain used in graphic tasks. I am one of those people who many moons ago did poorly in arithmetics but excelled in algebra, geometry, etc. I think that the whole idea of creating more pathways in the brain at an early age can only help later academically. I would be curious to know if two groups, one having learned to use the soroban, and another not, when reaching a new discipline that is more graphic in nature like geometry, would perform better than the group not exposed to the soroban method. I find the soroban process to be very interesting, I do find that decimal place order is very important in soroban and it requires the use of one's memory well. It is not just mechanical like the use of a calculator. The pushing of the beads is more methodical than the pushing of buttons in a calculator. One has to keep track of units and remainders while using a different direction of bead movement for positive and negative entries. It demands a rigor often necessary for solving mathematical problems. I find doing soroban worksheets very relaxing and satisfying. The idea of being able to perform soroban calculations without a physical soroban seems questionable in terms of an expected outcome. It seems like that outcome requires a lot of training and it is a skill that is not held long term.

I'm learning abacus myself now and am really enjoying it. I actually find it relaxing, whilst I usually find arithmetic tiring and frustrating.

I like the physical feel of the beads on my fingers rather than looking at ink on paper. I'm able to understand arithmetic better by watching how the beads move and where they end up rather than just looking at a question then an answer. It's one thing to memorise "8 + 7 = 15", which I never did before, and another to think "what's the best way get those beads to move to get to the answer, as I see the beads as an answer rather than just two numerals.

I've bought a soroban for my child but I'm not paying a fortune for soroban classes. I'll teach him myself, and if he enjoys it we'll see where it leads to.

Not the answer you're looking for? Browse other questions tagged primary-education arithmetic or ask your own question.