What are the best resources to learn trigometry? I recently decided to pursue a BS in mathematics at uni. I used to fail all my math classes with D's or F's until I started teaching myself, and so far I've done well enough teaching myself geometry, algebra, etc., to get consistent A's. However, within my first couple days of studying trigonometry I've noticed its already been a frustrating experience (I've tried about 3 books so far and still struggle understanding the first chapters). Of course, in order to do well in calculus and beyond I need to overcome this.

I personally would prefer a textbook recommendation I can download or pick up that is [preferably] not old and does not make trigonometry intimidating to approach (especially one that emphasizes understanding proofs behind properties/theorems). I'm fine with being recommended online lectures or series of videos if you insist, but I just think I learn best relying on textbooks based on my experience.

I would also like a platform one recommends to test my trigonometry skills (I don't want to rely on constantly flipping pages to find the answers to odd or even problems on the back of textbooks in order to test myself), preferably one that is cheap or free. I currently use Khan Academy's website, but for a variety of reasons they aren't ideal for me.

Schaum's outlines are very practical in general and cheap. Well suited to an older learner. Often the answers are right after the problems versus at the end. And you get all the answers, not the odd/even gyp. Thus suited to self learning.

It is from 1960ish, so the language is not archaic, but it's not "new". Not sure what benefit other than language you want from newer versions, but if you want a newer one, they have a recent 4th edition College Math you can get instead.

Note, this is a general pre-calc book (and probably what you need). But if you just want a trig primer, Schaum's has that as well. Obviously more trig problems in the trig book than the precalc book (which has all normal high school courses covered).

P.s. It would be easier to advise you if had told us what books failed you. Like did I write a long answer in vain?

P.s.s. I'm not sure why trig is so much a hurdle to people. But I do recommend to first think about the sin and cos and such in the context of the unit circle, not ratios of sides of triangles. It's just a little simpler concept and without a ratio to keep track of.

https://www.khanacademy.org/math/algebra2/x2ec2f6f830c9fb89:trig/x2ec2f6f830c9fb89:unit-circle/v/unit-circle-definition-of-trig-functions-1 (Kahn makes it a little more complex here by talking about ratios. But when I learned it the big benefit was a very first introduction with no ratios...just x and y axes of the unit circle.

Maybe a visual approach could supplement your study? There are many such resources available on the web, not in textbooks. E.g., Trig Intuitively:

Note: the labels show where each item "goes up to."

I personally would prefer a textbook recommendation I can download or pick up that is [preferably] not old and does not make trigonometry intimidating to approach (especially one that emphasizes understanding proofs behind properties/theorems).

I don't have textbooks to recommend, but I can recommend an approach to doing trigonometry that facilitates mathematical understanding of it by crystallizing the logical foundation of trigonometry and algebraic structure of trigonometric expressions. There are two 'levels' to this, depending on whether you want to go straight to complex numbers or stay within real trigonometry. In either case, the focus is on identifying the intrinsic core of trigonometry and reducing everything else to that.

The key quantities are $\cos(t)$ and $\sin(t)$, which are the $x$ and $y$ coordinates of the point $P_t$ on the unit circle that subtends an arc of length $t$ anti-clockwise from the $x$-axis, as depicted in the image from wikipedia: 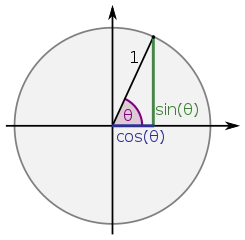 Here arc length is measured along the unit circle, and $π$ is defined as the arc length of the semicircle, so $2π$ is $360°$. (This way of measuring angles is often called measuring them in "radians", but I personally think it is an unnecessary term.) Note that $P_t = P_{t+2πk}$ for any integer $k$, because $2πk$ would be an integer multiple of full rounds. Also note that increasing $t$ moves $P_t$ anti-clockwise, while decreasing $t$ moves $P_t$ clockwise. Related to that, $P_{-t}$ is the reflection of $P_t$ across the $x$-axis.

Note that the signs of $\cos(t)$ and $\sin(t)$ match exactly the signs of the $x$ and $y$ coordinates of the point on the circle. (Do not listen to people who tell you to memorize something to determine which of them is positive in which quadrant.)

The other key algebraic facts arise from considering rotation matrices applied to vectors. (If you are unfamiliar with matrices as operators on vectors, please read this first. For an introduction to vectors in euclidean space, see here.) Let $R$ be any rotation about the origin in the plane. Then $R$ satisfies three properties:

We can take these properties as axioms (assumption) about rotations. After all, if $R$ does not satisfy them then we would not call $R$ a rotation to begin with. To see why, property (1) captures the intuition that rotating two connected rods will rotate both rods by the rotation angle while preserving where they connect. Property (2) is only needed in conjunction with property (3). Property (3a) follows from the definition of $\cos,\sin$, and property (3b) follows from the same definition rotated $90°$ anti-clockwise.

And then using property (2) we get:

Multiplying the matrix product on the right and comparing with the matrix on the left immediately gives the angle-sum identities:

Whenever you wish to simplify expressions involving trigonometric functions on sums of angles, you should consider using these identities to reduce the expression to be in terms of $\cos,\sin$ of as few angles as possible.

Going on to real analysis, we would need the following facts, which can be taken as axioms for now (and justified separately later):

As before, everything can be reduced to these, so there is no real need to memorize anything more (even though it may be convenient to do so).

Personally, I think it is best to go straight to the complex-valued trigonometric functions, if one desires a complete and rigorous foundation for the mathematical field of analysis. One simply defines: $ \def\rr{\mathbb{R}} \def\cc{\mathbb{C}} \def\lfrac#1#2{{\large\frac{#1}{#2}}} $

$π$ is twice the first positive root of $\cos$ (after proving that it exists).

Suffice to say that with these definitions, we can prove by basic analysis that $\exp,\cos,\sin$ satisfy the desired motivating properties as well as another key property of $\exp$:

Using this property, we can prove all the trigonometric identities via algebraic manipulation alone (and they hold for complex variables and not just real variables).

For instance, given any complex $z$:

Nevertheless, it is often still easier to first prove the same key algebraic facts for $\cos,\sin$ and then use them to prove other identities, than to reduce everything to $\exp$.

Do Saylor Academy or edX have anything that will help you? They are both free platforms with math courses. Saylor Academy is almost exclusively uses a textbook - you can actually get credit through them. Modernstates.org also may help you - they have a self-guided course with videos to teach it. Rootmath may be a good resource too. Are you planning on getting credit for this course through the Clep?

Not the answer you're looking for? Browse other questions tagged self-learning teaching precalculus trigonometry resource-request or ask your own question.

31
The best way to introduce trigonometric functions in a rigorous analysis course
6
Is there a more intuitive way to solve combined rates of work problems?
19
How to learn math from textbooks in the right way?
8
Requirements to learn calculus
11
Pedagogical considerations behind current order of presentation of trigonometry
5
Which textbooks on College Algebra, Trigonometry, Pre-calculus, Calculus, Linear Algebra, ODE are written by world-class mathematicians?
3
Interesting Trigonometry problems
6
Is Trigonometry done differently in the US?
0
Best PreCalculus Textbook