When (and why) did geometric means of more than two numbers exit the secondary curriculum?

(All three of the above images are taken from Glencoe / McGraw-Hill Geometry, 2008.) 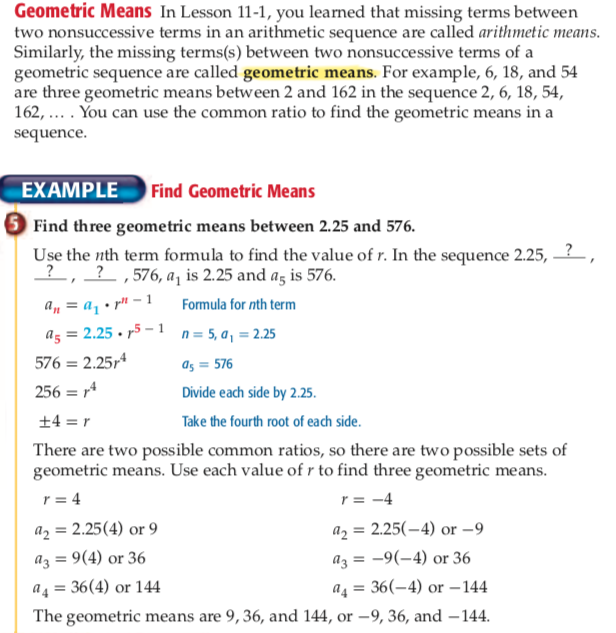 One thing that all of these examples have in common is that students never find the geometric mean of more than two numbers. And yet there are plenty of instances in which it makes sense to compute the geometric mean of three or more numbers! Compound interest is one such context: for example, if the value of an investment increases in three consecutive years by 10%, 15%, and 2%, the correct way to describe the average annual growth rate is not to compute the arithmetic mean $\frac{10+15+2}{3} = 9$, but rather the geometric mean $$\sqrt[3]{1.10\cdot 1.15 \cdot 1.02}\approx 1.0887$$ (so the average annual growth rate is 8.87%, not 9%).

As far as I can tell, the topic of geometric means used to play a larger role in the secondary curriculum. The first "old" Algebra 2-type textbooks I looked at (Higher Algebra, 1891, by Hall & Knight) included a discussion of general geometric means, as well as a statement of the AM-GM inequality (i.e. that the arithmetic mean is always greater than or equal to the geometric mean). (See figure below).

So (assuming these isolated examples are representative), it seems that once upon a time the GM was part of the curriculum, and now it is not, except in the limited case of the GM of two numbers. I was in high school in the late 1980s, and I seem to recall the general case was still being taught at the time -- but my memory may be wrong.

My question, then: When did the geometric mean (of more than two numbers) disappear from the curriculum? And does anybody have any thoughts as to why?

Just to be clear, I don't expect any one person to be able to give a definitive answer to this. I would be more than happy with some additional data points, of the form "In this 1985 textbook, I find... but in this 1994 textbook from the same publisher, it's gone."

Your last para was very reasonable. (I was going to give a mean sarcastic answer, but can't now.) We can crowdsource this:

Only has geometric mean of 2 objects, but does spend quite a lot of time on geometric progressions. And also discusses getting multiple geometric means between two numbers. Note also that it is covering a lot of territory (4 years of math in a 430 page text, with problems and answers). Note the discussion is all algebraic, not geometric. But there are word problems, not just calculation.

College Algebra, William Hart. I have the 1938 War Department edition, but it was a popular text in different editions from the 20s to the 50s, I think.

There is a similar length section on algebraic, geometric and harmonic progressions (even some infinite ones). Geometric mean is discussed only as between two endpoints, but similar discussion of having several means between the first and last member. Some very nice word problems (ancestors, money) that make you think. This is all in a chapter called "Progressions".

100 pages LATER in the book, the geometric mean of multiple numbers is discussed with problems. This is within a section on computation with logarithms. Presumably this is because the log concept and log tables make taking the cube and larger roots possible. (Think logs were not yet taught in the Progressions chapter.) Makes sense. Nice problems again (e.g. with money, volumes, and just numbers). But very short subsection (not even a section). No geometric discussion per se.

Calculus: There is one problem within Thomas Finney Calculus and Analytical Geometry (1980, the iconic blue textbook with kaleidoscope cover that you see in the movie Stand and Deliver) where the concept of geometric means, of several numbers, is used (and explained en passent). It's not to teach geometric means per se but some sort of problem with a ratio of arithmetic and geometric means as a series varies, requiring calculus and stuff. However Granville Calculus (iconic 1900-1960s text) does not reference the concept, at least per the index. Swokowski Calculus (1975 and 1983 editions) do not refer to geometric means either.

Geometry/trig: Also none of my geometry, analytical geometry or trigonometry texts (about 2 of each, and 1940-1980 ages) reference or use geometric means at all, at least per the index (and I looked under both m's and g's!)

Post calculus: Nor does Kreyszig Advanced Engineering Mathematics (1983), even within a problem), although geometric series are discussed wrt convergence. Situation is similar wrt Arfken Webber or the various ODE, PDE, and complex analysis texts I have. No mention/use of geometric mean. Some discussion of geometric series or of mean convergence. (Nor is it in my 1980s Giancoli General Physics, even within a homework problem on something else.)

Net/net: It's really not that important a concept in daily life. Even the regular geometric mean, let alone the multinumber one. Can't recall ever using it in physics, engineering, chemistry or finance...although I'm sure you could torture up a homework problem with effort.

(EDIT) While the one text that covered multinumber geo mean (Hart) waited until after logs and covered it in the context of calculations with logs, this is not so necessary in a modern course. Provided the properties of exponents and roots other than the square, have been already been covered, the student should be fine to find the 3rd, 4th, 5th root. As in all likelihood, he will use a scientific calculator for the root. (Or the problems can be made to be obviously extractable with numbers like 125, 64, etc.) Thus, it could be included within a slightly longer chapter on progressions.

In general, it maybe is a good thing to build muscles with for stronger kids. And maybe it reverberates in memory long enough to have some touchpoint when they look at geometric series convergence (but I doubt it). But it's probably not the end of the world to give it short shrift for the average kid. In the extreme even that use of it or manipulation of it is needed by some strong STEM kid in later classes, they can probably look it up and use it and will have enough general manipulational skills from other topics that it won't throw them.

P.s. I do very commonly solve for "CAGR". https://investinganswers.com/dictionary/c/compound-annual-growth-rate-cagr This may even be the same thing as geometric mean (not sure, but it's smelling that way now). But I never think about it in terms of geometric mean. Just think of CAGR. Also, you really don't need a multinumber geometric mean (even with several different growth rates, over a several year period) since you can solve for the CAGR still using the last and first values of the revenue (with all the growth multiplied in). Probably this shows some linkage of the concept of two value geo means and multinumber means.

20
When did the American school system's progression of math classes take its current form?
7
Adoption / penetration rates for dynamic geometry software in secondary school
9
What topic could I cover in an optional course at high school taking two lessons a week during a whole semester?
10
Teaching geometric transformations through fractals?
13
High-school level algebra textbooks for gifted students
16
SMSG: Did any school districts actual teach the curriculum as planned and what were the results for the teachers and students?
11
How to teach a student algebra who misses too much previous knowledge?
15
Why is polynomial factorization over the integers part of secondary school curricula?
16
Would a 1990's educated person need additional content knowledge to tutor high school mathematics today?
17
Learn university maths or train for high school competitions: which is better?