Easy examples of correspondence between global and local, as preparation for Gauss's theorem and Stokes's theorem

I'm teaching freshman electricity and magnetism this semester, and as usual in this type of course, I will need to teach my students a lot of vector calculus before they see it in a math course. The usual way this works in most curricula in my country (US) is that students only learn the integral form of Maxwell's equations. This semester, I'm attempting to do more of a balanced presentation, so that students will have some clue as to the local form of these equations, and of the correspondence between the differential and integral forms. This is meant to be mostly at a pretty simple level, without a lot of emphasis on coordinate-based calculations. They will see Gauss's law next week (the second week of the semester), but will not see Stokes's theorem until the very last week of the semester.

In this context, I'm looking for simple, easy examples of this kind of interplay of global and local perspectives in math. The simplest example I've come up with, to get across the idea that there can be local statements and global ones, is a linguistic one:

There are three errors in the sentence, only one of which can be detected if you're looking through a keyhole and can only see one letter.

A second example would be that if one of the kitchen staff at a fancy restaurant is stealing the gold-plated silverware, you can detect it either by seeing them put it in their pocket, or by seeing that the count of pieces at the end of the day is short. This is the discrete analog of the fundamental theorem of calculus.

As a third, visual example very specifically applied to Gauss's law, I have this picture: 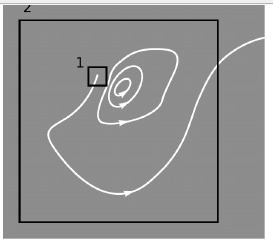 Here a vector field in two dimensions is represented by field lines. If this is a vacuum, then Gauss's law is being violated. Such a violation at the global level (line escaping the large square) can always also be detected at the local level as well (line escaping the small square).

I feel like there ought to be a nice example from some branch of mathematics that would interpolate between examples 2 and 3 in terms of obviousness or surprisingness. Basically I would like an example that is sort of interesting in its own right, and easy to verify once you see it, but that isn't like the silverware example in being kind of trivial and uninteresting.

It seems like Euler's polyhedral formula is exactly right in spirit, and maintains some simplicity because it's entirely discrete. However, I feel like I would probably need too big a chunk of a class session to do justice to this example. Is there some simpler example from geometry or topology that demonstrates the ideas without getting into calculus?

One idea that comes to mind is the fact that a connected graph has a Eulerian circuit if and only if every vertex has even degree.

Another idea that comes to mind is just the Fundamental Theorem of Calculus. If you have a rather boring video of a car's speedometer as the car travels from A to B, then you can figure out the total distance the car has traveled in getting from A to B. The "list" of speeds read off from the speedometer is local/instantaneous information. The net distance traveled is a global quantity.

(1) The shortest geodesic between two points on the surface of a polyhedron (generally) bends as it crosses edges, when viewed globally in $\mathbb{R}^3$, but from the local point of view of an ant walking along the path, it is straight, i.e., straight when each crossed edge is unfolded flat.

This is commonly illustrated on a cube. Here is a more complex example.

Shortest paths from upper left corner to each vertex. Image from here.

(2) Imagine an ant walking around the apex vertex in the left image below. Locally it has no way of knowing whether it is exploring a protrusion, or a dent (right image). The curvature is the same at that central vertex, but the embeddings in $\mathbb{R}^3$ are different.

A bit of a stretch, but you could connect this to the difficulty we have understanding the geometric shape of the universe.

Local-to-global is a big thing in algebra, starting with (Hasse-)Minkowski's result that if you have a solution to a quadratic form modulo all prime powers and in the reals, you also have one over the integers. (See Theorem 2.4 here for the Minkowskian statement without $p$-adic numbers, which is otherwise a bit difficult to find in a quick web search.)

But there are plenty of (simple) equations with solutions modulo $n$ for every $n$, but no integer solutions. There is a convenient list of these here, probably the easiest of which is $$(x^2-2)(x^2-17)(x^2-34)=0$$ Naturally, that example might be beyond/irrelevant to your students, but it's interesting that such things are possible. Also, clearly if you have a integer solution you will have solutions modulo $n$ for all $n$, so this is nontrivial.

Jordan Curve Theorem: If you have a closed curve, there is an "inside" and "outside", and those are defined globally (two points are on different sides if every path between them crosses the curve at least once), but one can test whether two points are on the same side with a somewhat local test of drawing a line between them. If the line intersects the curve an even number of times, they are on the same side, if odd, then they are on different sides.

Conservative Fields: Give them a diagram of a roller coaster, ask them to write an equation for the force at all points, then integrate over the whole path to get the ending velocity. If we pretend there's no friction, this should be the same as just using the difference in gravitational potential energy.

13
Applications of Vector Calculus to Economics/Finance
12
Hands-on demonstration ideas for multivariate calculus
8
Surfaces and volumes for vector calculus
10
Open Source Math Software in Multivariate Calculus
5
Honors project idea for linear algebra
17
Differential forms in mechanics?
5
In a typical 3rd-semester multivariate calculus course in the US, what kind of area integrals do students actually learn to do?
5
Undergraduate Vector Calculus Notation Mess
15
Analogies for grad, div, curl, and Laplacian?
7
Is there a study that compares 8-week vs 16-week math classes?