How to explain even higher moments

In prob/stats, students mostly get the idea of mean/expected value, and variance/s.d. slowly sinks in. Even the third and fourth moments (about the mean) have "standard" interpretations - skewness and kurtosis. The latter is something one can at least think of geometrically, e.g in terms of the tails.

Does anyone have ideas for a good, student-centered geometric interpretation (or other intuitive one) for higher moments? I realize that there may not be any great ones - see for instance this answer - but even a nice graphic describing 3rd versus 5th moment, or how the moments change as they go higher (even versus odd) would be useful.

Yes, I did get this question. To be fair, it's a math major course, not intro stats for social sciences or something.

I must confess I'm not an educator, but I like this question and at the very least I can answer with the intuitive picture I use in my own head.

For what follows we will take the measure space of $X$ to be the real numbers, since that's the easiest to visualize and the most common thing to deal with in statistics. Now, with this knowledge we can rewrite the moment as

where $f_X$ is the pdf of $X$. To help complete the mental image, it is important to keep in mind that $E[X]$ is a constant and $f_X$ is a normalized function that is non-negative. So, our integrand looks like some single term polynomial centered at the mean of $X$, multiplying the non-negative pdf of $X$. This is a lot clearer once you see what I'm talking about, so I will show some photos and explain.

Second Moment (and even moments in general):

Here is a picture illustrating the integral I was talking about for the second moment using some pdf I made up. The dotted line is the pdf, the dashed line is the polynomial term, and the solid line is the total integrand: 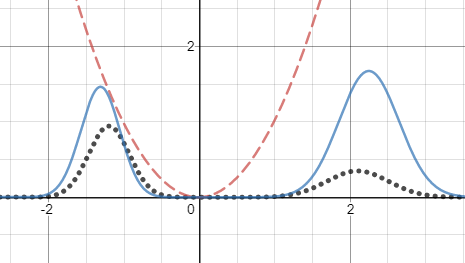 Keep in mind that the moment is defined as the integral of the solid curve. There's a couple of things worth noting here:

Summarizing these points, we see that even moments give us a measure of how far from the mean we can expect our random variable to fall. As we go to higher and higher moments, these will give more and more weight to parts of our distribution that lie farther from the mean. So, if for whatever reason there's a bump in our pdf super far from the mean, or a tail that doesn't decay as quickly, it will lead to large higher order moments.

Here is an analogous picture for the third moment of the same pdf: 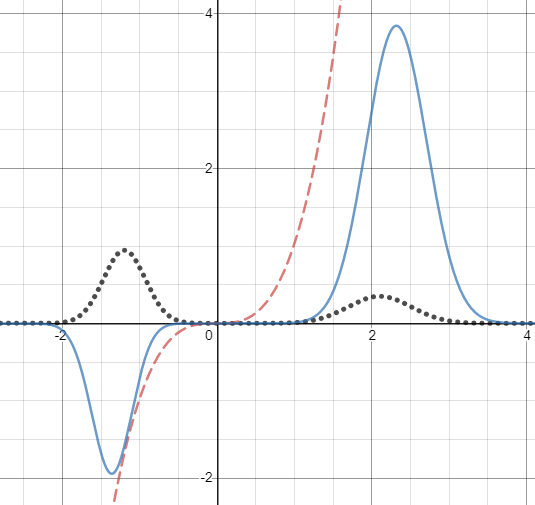 We can see that odd moments work just like even moments for bullets one and two in the previous section. However, now there's an added complication-- our polynomial is negative for some values, so the integral from the left side of the mean will cancel the integral from the right side to some extent. Thus, odd moments no longer just measure how far things are distributed from the mean. They also provide a measure of the asymmetry of the pdf-- a pdf perfectly symmetric about the mean will have null odd moments. This gives them more information than even moments in some sense, but the drawback is that they're harder to interpret taken alone-- a third moment close to zero could mean that you have a perfectly symmetric, widely distributed pdf, or a narrowly distributed, highly asymmetric pdf. As before, higher order moments will accentuate features that lie far from the mean, so a tail that decays faster on one side than on the other will make a large impact in higher order even moments.

Most of the previous discussion took place using raw moments, but a lot of times the standardized moment is of more interest, ie

is the standard deviation.

There are two main reasons for this:

Ultimately, it's impossible to give a completely general yet useful interpretation for what any one moment means. There will always be vastly different distributions that have the same moment, because fundamentally you're trying to describe something with an infinite number of degrees of freedom (the pdf) with a single number. However, there are three rough guidelines that help give a bit of intuition:

4
Statistics students lack calculator skills, how to help them?
8
How to teach steady state in queueing (if at all?)
9
How to explain that the sums of numerators over sums of denominators isn't the same as the mean of ratios?