Books about middle school algebra and trigonometry written by someone like Gelfand are rare (I don't know other examples; for example V.I. Arnold's books nomially for children are aimed at very special children, their author's claims to the contrary), but there are many undergraduate textbooks written by superb mathematicians. I list below some that occur to me now. However, most of those I list are aimed at a level probably a bit above that which interests the OP.

Serge Lang wrote textbooks on calculus, linear algebra, complex analysis, and some other undergraduate subjects. I don't particularly like his books, but that is a different matter.

While not exactly a textbook, the book of Persi Diaconis and Brian Skyrmes called "Ten great ideas about chance" is an excellent introduction to probabilistic thinking directed at a general undergraduate audience.

Marcel Berger wrote some textbooks directed at future math teachers that treat classical affine and projective geometry (they have been translated into English). They would be hard for a US educated audience.

Elias Stein has coauthored with Rami Shakarchi a series of books on real, complex, fourier, and functional analysis. The only one I've read is the book on Fourier analysis, and it is excellent and pedagogical, the book I always wished I had encountered as a student.

Yuri Manin wrote a linear algebra textbook (however, it is not afraid to discuss functors).

This may not qualify, as it is a stretch to classify this as a "textbook." It arose from a series of lecture Klein gave to high-school teachers. 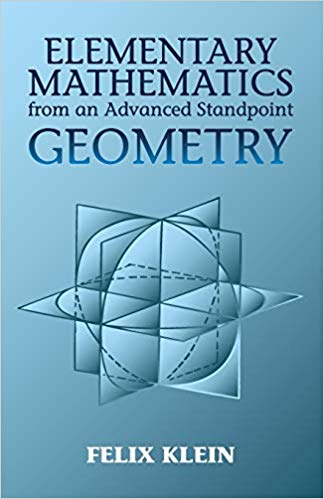 "Gentlemen! The course of lectures which I now begin will be an immediate continuation of, and supplement to, my course last Winter."

How times have changed!

I am less familiar with the content of the other volumes:

1
Is there a College Algebra book that was written by a world-class mathematician?

29
Books about elementary mathematics written like a good undergraduate textbook
13
Appropriate ways/sayings to discourage undergraduate students' overreliance on calculators
5
Inquiry about My Self-Study Plan for Real Analysis (for my research and self-enrichment)
6
Aspiring HS Math Teacher: Textbooks for learning Algebra, Geometry, Trigonometry, and Calculus?
6
Is Plane Trigonometry by S. L. Loney still good as a textbook today?
15
How does one tutor an A-level student past the derivative paradox?