Is this primarily a "rote computational trick" for multiplication by 9?

I tried uploading a gif, but was unable to do so. What I can do, is share a link to the gif here. (SE software seems to have allowed me to share the link, but not upload it.)

What it shows, initially, is the times table for 9, without answers:

Then the student proceeds by starting from $2\times 9$ with the initial digit 1, then counts up from one as she moves down this column in the times table, to get:

Then they show the student counting backwards (starting from 1 at the bottom of the list, up to 9 at the top of the list, in the unit digit's place, to get:

I've never seen this before. Is this primarily a "rote computational trick" for elementary students to learn single-digit multiplication by $9$, or is there an explanation that elementary students can understand as to "why this works"? I have done graduate research in secondary ed, and undergraduate math ed, and teach at a University, so I am not well versed wrt math education at the primary ed level.

I'm not sure what I think about this "trick"; I would hope at least, for primary grade students, that subsequently, why this works for 9, would be explained to students. It isn't entirely symmetrical, either, as the student proceeds, with the ten's digit from the top $1\times 9$ being blank (or zero), then descending by adding 1 down to 8, to complete the ten's digit. Then she starts from the last row to enumerate unit digits, moves upward each step, counting from 1 to 9.

ALSO, because it doesn't seem to be clear to all answerers, I am firstly interested in how to help primary students learn the multiplication tables. There are clever tricks, but often times students cannot understand WHY they work, until some future time. I'm reluctant to demand rote memorization, so if there are reasonable tricks, accompanied with explanations that make sense to students first learning their multiplication tables, I would like to know those explanations.

Anything that is just a trick leads to students having wrong ideas about what math is. But methods that help students see the patterns can help them learn the multiplication facts, along with getting a better feel for what's going on.

I'd call this a way to think about 9s. (There are many.) This method shows that you add 10 for each new nine, and then take away 1.

Yes. This is also a trick that you can do on your fingers, too. For instance, let's say you wanted to calculate $9\times3$. 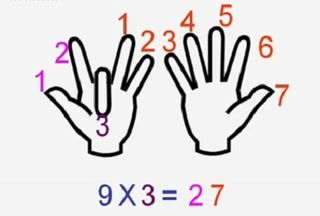 Hold out your hands and bend your third finger down as shown. So nine fingers are "up" (fingers up, $9$, finger #3 down. (9x3). You have two fingers to the left of the bent finger and seven to the right, indicating the product of $27$.

Explaining this to students will depend on their prior knowledge and your standards. I would probably note that $9=10-1$, and so adding nine to a number is the same as adding one to the ten's place and subtracting one from the unit's place (as long as there was something to subtract in the unit's place).

To add on to the other answers, the reason this works is because we use the decimal system, a.k.a. the base-10 system, for our everyday maths. The multiples of the number that is one less than the base results in a phenomenon where the second digit increases at the same rate as the first digit decreases.

As the above implies, you see this with different multiples in different base-$n$ systems. For example, the multiples of 7 in octal (base-8):

Technically binary (base-2) does it too, though it's less interesting to look at:

(I cheated a little there to keep it formatted nicely as 2 doesn't exist in the binary system, but hopefully the point is still conveyed.)

One neat trick that might help for some of your students is the digital root of a number.

For a number, the sum of its digits is taken. For example,

While the result is not a single-digit number, keep repeating the process:

A useful trick for remembering the 9x tables specifically is that the digital root of any positive multiple of 9 is always 9!

In answer to the question "I've never seen this before" I knew this 'trick' with the 9x table and the one with 11x table also mentioned here when I went to primary school about 50 years ago.

I will expand on the 11x as it has already been posted. This is mainly for the teacher but I was about 10 years old when I first learnt it.

Later you can multiply very large numbers with a 'trick'.

There are a few other nice 'tricks'.

I was taught the multiplication table for single digit numbers multipled by $9$ based on two observations: a. the digits of the result sum to $9$ b. the first digit of $k \times 9$ is $k-1$. This sort of trick is helpful because it makes the multiplication tables more interesting and easier to memorize. In particular the student feels proud for having mastered early the big number $9$.

For me as a child it was also one my first encounters with math (rather than arithmetic). I remember spending some time (probably with some parental urging) trying to understand why a. and b. are true, and why they are special to $9$.

Not the answer you're looking for? Browse other questions tagged primary-education arithmetic multiplication-table or ask your own question.

29
What are the arguments for and against learning the multiplication table by heart?
5
Strategies for x8 multiplication
7
Why are times tables thought to be important?
8
Multiplying two decimals using (camouflaged) binary representation
2
The Order in Which Arithmetic Operators are Taught
4
Resources for Learning Multiplication Facts
10
Is short division taught these days and if not, why not?
7
Is there a numerical base that is in any way “better” for simple mathematical calculations than others?
12
Different ways to multiply decimals
59
Is there a virtue to learning how to compute by hand?