The impact of dyslexia on learning mathematics, and available resources

I have always loved the beauty of mathematics and physics. However I'm severely dyslexic and find it hard to keep numbers in my head, any more than 4 numbers at a time and they melt together and lose their meaning. (You know that feeling when you wake up after a lucid dream but as you think about it, it just evaporates? Well that's what it's like.) However, I'm pretty good at understanding concepts like Cantor Sets, mathematical logic, etc.

I have degrees in the philosophy of science and have studied epistemology, so I'm comfortable with abstract concepts BUT, I want to do some mathematics, I want to try algebra and trigonometry, to play with equations but I just don't know how to start.

Are there any books designed for the likes of me? Can someone who finds it hard to add two two-digit numbers together in his head, and even takes a second to decipher a 4-digit number on paper be taught to do advanced math? Is it like teaching a 1-legged man to run or a pig to fly?

I'm interested in hearing the opinions of people who love math, who can do math and maybe understand what a lot of my friends don't - namely why I at least want to try. Thanks.

Thanks for your comments,

Let me rephrase my original question if it helps.

What you have written is encouraging, but math - even at a basic level is a foreign land to me. I would love to do some sort of higher math (no, I don’t really know what that means). but I would love to try to understand equations. But can I learn to do algebra or trigonometry and beyond when I can’t recite the 6x table or add 34 and 58 in my head? If I can, and I think you are saying that I might just be able to, where do I start?

I think the short answer to your question is that you are (like many people) confusing the arithmetic that you called 'mathematics' at school with the mathematics that mathematicians do. I very rarely add up numbers above 10, or write down ones with several digits. I think I possibly do own a calculator... somewhere.

I would suggest starting with some popular-maths books, and see how you get on. Since you've already done some philosopy, maybe try some logic. (I was going to suggest a book I liked, but I've completely forgotten what it was.)

I'm not exactly sure what's being asked here, since you say you want to to learn how "to do advanced math," but also that you "want to try algebra and trigonometry, to play with equations." I can't tell exactly what you mean by do advanced math, but you say:

So: It seems to me like you have already "done [some] advanced math." Furthermore, you write:

I have degrees in the philosophy of science and have studied epistemology, so I'm comfortable with abstract concepts

So: Sure, if those degrees are legitimate, and your study of [some area of] epistemology was more than superficial, then I expect you could handle abstract mathematics as well.

That said: I get the sense that you are concerned about a combination of dyslexia and dyscalculia interfering with your learning. To this extent, there are some comments by Poincare and Hadamard about how neither of them was a particular capable "calculator" (in the sense of doing mental computations). The latter goes on to remark in his book "The Psychology of Invention in the Mathematical Field" (1945) that very few of the mathematicians who he knows think in words or even algebraic symbols.

More precisely, Hadamard writes that nearly all of the mathematicians who he knows

"avoid not only the use of mental words but also, just as I do, the mental use of algebraic or any other precise signs; also as in my case, they use vague images" (p. 84).

Finally, Hadamard discusses physical intuition and mental pictures of a kinetic sort as being relevant to mathematicians' ways of thinking.

Thus: If you can think abstractly but are tangled up by words and symbols, then you could still be in good mathematical company.

For completeness: Hadamard does write about a few notable exceptions.

He contrasts the use of image-based thinking with the following three mathematicians:

George D. Birkhoff, "who is accustomed to visualize algebraic symbols and to work with them mentally," Norbert Wiener, who "happens to think either with or without words," and Jesse Douglas, whose "research thought is in connection with words, but only with their rhythm, a kind of Morse language where only the numbers of syllables of some words appear" (p. 84).

Lastly, he mentions the rare exception of George Polya, whose thoughts rely in some large part on words and letters. Hadamard quotes Polya describing his own thinking:

"I believe… that the decisive idea which brings the solution of a problem is rather often connected with a well-turned word or sentence… The right word, the subtly appropriate word, helps us to recall the mathematical idea…" (p. 84).

"Moreover, [Polya] finds that a proper notation – that is, a properly chosen letter to denote a mathematical quantity – can give him similar help; and some kind of puns, whether of good or poor quality, may be useful for that purpose" (p. 85).

(In case it is unclear: I highly recommend this book!)

I look forward to the responses to this interesting question. Instead of answering directly, permit me to make an analogy to art.

Frank Stella is a renowned artist whose influence and compositional talent cannot be questioned. Nevertheless, I happen to know from reliable second-hand reports, that he cannot "draw" in the sense that, say, Leonardo, or even a contemporary cartoonist, can "draw." This is roughly equivalent to limited mental arithmetic abilities.

Just as the essence of art is the compositional inventiveness with shapes and colors that resonate with viewers—not drawing talent, similarly the essence of mathematics is patterns of interrelated, fertile concepts—not calculation abilities. 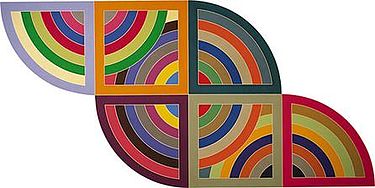 Not the answer you're looking for? Browse other questions tagged reference-request recreational-learning special-needs-education dyscalculia or ask your own question.

19
Books that every aspirant mathematician should read
49
How do blind people learn mathematics?
23
Dyscalculia and studying mathematics (as major)
14
The interplay of memory and mathematical performance

14
What experimental studies have been done on the Kumon method of teaching and learning mathematics?
7
References on British, German and French educational system
9
Is there an introductory book on linear algebra that makes use of simple concrete examples to teach the underlying theory?
36
Imbuing a six year old with a sense of mathematical wonder
5
Entertaining and fun books about mathematics for (basically) liberal arts students
10
"Good" and "Bad" student intuitions when teaching and learning mathematics
4
Is there a class curriculum that studies the work of a mathematician?
12
Instilling a Growth Mindset in a Student Diagnosed With Dyscalculia
5
Tips and References for a 15 days Course on Math
58
Is there a virtue to learning how to compute by hand?