What is the best way to intuitively explain the relationship between the derivative and the integral?

This is my first post so bear with me, but something I've been thinking about lately is: Why didn't I ever question the relationship between the derivative and the integral when I was taking calculus?

Let me explain what I mean: In most courses, the derivative is introduced as the slope of a curve at a point, or the "instantaneous rate of change". Then the integral is introduced as the area under a curve. Then students are told that these two things "undo" each other (the fundamental theorem of calculus). So now I'm wondering, why didn't I ever question why these "undo" each other? It's not intuitive at all. For example, addition and subtraction, multiplication and division, logarithms and exponentials; all of these things I can intuitively understand why they "undo" each other. But how does something that represents the area under a curve "undo" something that represents an instantaneous rate of change? What is the connection between those two concepts? Is there a better way to explain these concepts that makes the fundamental theorem of calculus more intuitive?

Looking forward to hearing some of y'alls responses. Thanks!

Added: The first sentence is a part of what is called “Discrete Calculus” https://en.wikipedia.org/wiki/Discrete_calculus 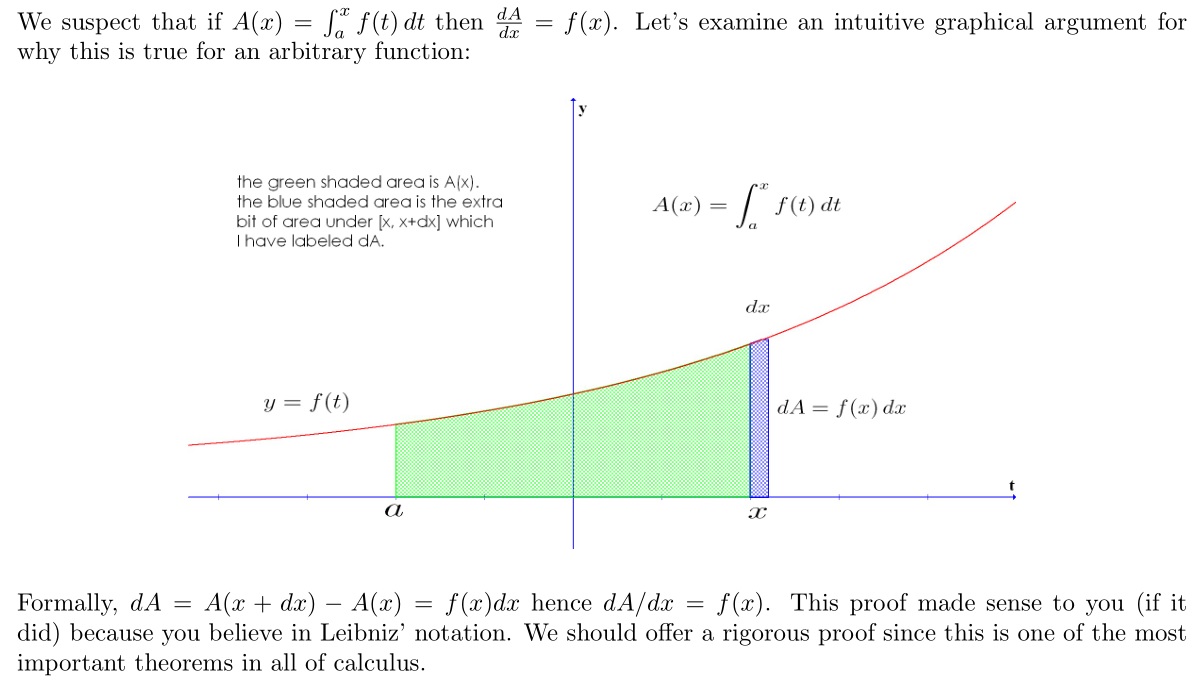 (this is from my calculus notes, see page 233 of: http://www.supermath.info/OldschoolCalculusII.pdf)

If you like thinking in terms of infinitesimals, write $dF=F(x+dx)-F(x)=f(x)dx$ and divide by the differential. This can be a cleaner way to think as the limit process is left implicit in a way.

This is the way it makes intuitive and graphical sense to me. The link is not immediate; that's why it's a great theorem.

I gave a similar post to this one touching on this on Math.StackExchange.

Basically, the way I would go about it is to say that there is a very easy way by which one can think of at least Riemann integration (the usual definition given in a "most courses" calculus course) as an inverse of differentiation by construction: that is, the relationship between the two is not an "accident", but design, so that given one, you could fairly easily be led to the other.

And to do that, I'd first suggest getting rid of the whole "slope" vs "area" business altogether - if anything, those are best given as theorems to be proved, after you have other, free-standing definitions of a tangent line and an area which, by the way, can be done, but just too-often aren't, in favor of various hand-waving arguments.

Instead, the relevant idea is change: the derivative of a function $f$, i.e. $f'$, stands for a kind of "sensitivity" measure. Suppose that $f$ were like a kind of meter or instrument, with a knob attached to it, and a readout of some kind. The knob attached is the function's input argument, typically denoted $x$. The indicator on the readout is the return value, $f(x)$. If $x$ is set at some value of interest $x_0$, then likewise the readout will be at $f(x_0)$. Now suppose you "wiggle" the knob $x$ back and forth a little bit, and you see how the needle $f(x)$ responds to that small impulse. For a continuous function, the size of the output's wiggle will be smaller in absolute terms the smaller you make the input, but the proportionate size, i.e. how much it wiggles relative to how much you wiggle the input value, may not be. When we say $f$ is differentiable, what that means is that there exists at each point $x_0$ a proportionality factor $f'(x_0)$ such that

so long as the change $dx$ is suitably small

Integration, then, goes the other way. Suppose that I am given now, not the function $f$, but only its derivative, $f'$, and want to find $f$. First off, one should observe that since $f'$ only deals with changes in the input, to start, we actually need one more piece of information, and that is some sort of initial value, i.e. $f(0)$. Suppose this to be given as well.

which is just what you see above.

which, combining with the previous expression, becomes

and it is not hard to then continue this process so that we see for $N$ steps,

and to be more general, if we take $N$ steps of suitable, perhaps different, sizes $\Delta x_i$ to reach from $0$ some fixed point $x_0$,

and then we consider what happens as the steps become arbitrarily fine, at which point we hope - and need to prove - that

which leads us to define this new operation, given by the limit on the right...

My answer also comes from physics.

Say p(t) is the position of an object in the time t. For concreteness, suppose you are traking a truck and the truck is going forward on a road from A to B. (i.e., all derivatives are positive)

It is very natural to graph p(t), and derive it, arriving at v(t), the speed of the truck for each time. After all, the derivative is just taking a small time increment $dt$, calculating the corresponding $ds$ (a space increment) and dividing

But that (taking a limit) is an integral!

The only weird thing is my assuption that I am at position 100km at time t=0. The graph of v(t) cannot tell me that. Intuitively, it does tell me how fast I am going, and therefore can tell me how much how much I walked, but it cannot tell me at which specific part of the road I started. That is that weird constant +c that appears on the indefinite integral.

But then again, we dont use the indefinite integral much, do we? We are more interested in summing $dt$*v(t) for ranges. Say, from t=3 to t=10. That gives me the amount I walked between those two times. So, mercifully, the +c disappears in most use cases: to know how much I walked, there is no need to know where I started.

When I first began teaching Calculus, I realized that I really didn't understand the Fundamental Theorem. So I looked for something that would help me have a deep understanding, that would also help me help students to see it.

I found a lovely project, which I have modified over the years. Here are links to the pdf and to a .doc version (in which the formulas are messed up, because google docs couldn't read them). If you use this, you'll want to change the part near the end where I reference the textbook.

If you want more clearly "undoing" operations, define "stacking" as the following:

Take some $\Delta x$. Chop the curve into rectangles of width $\Delta x$ and height $f(x)$. Now, take each rectangle and shift it vertically down the height of the previous rectangle. For instance, if $f(x) = x^2$, the first rectangle will have height $0.01$. The second one will have height $0.04$, so for the unstacked version, we move it down $0.01$, leaving its new height as $0.03$. Another way of phrasing it is for each $x$, take the rectangle whose bottom left corner is at $(x, f(x))$ and top right corner is $(x+\Delta x, f(x+\Delta x))$. Then create a chart out of all of those rectangle, with all of them moved down so their bottom is on the x-axis.

For "well-behaved" functions (I believe that uniform continuity is a sufficient condition), as $\Delta x$ goes to zero, stacking becomes integration, and unstacking become differentiation (with the proper scaling).

Well, for me, the nicest intuition comes from physics. If $F=F(x)$ is some force applied to an object $O$ casuing $O$ to move, where $x$ is its displacement, when the work $W(x)$ produced by that force from $x_0=0$ to $x$ metres is given by:

Now, what if we ask what is the rate of change of that work with respect to displacement? At some certain point $x$, the work provided to or substracted by that object $O$ is determined by the force $F$ applied on it. So, one can intuitively expect that:

basically, the derivative is the opposite of the boundary.

Not the answer you're looking for? Browse other questions tagged undergraduate-education calculus or ask your own question.

15
Iconic image to explain the fundamental theorem of calculus?

9
"Greatest hits" of applications of freshman calculus to economics?
17
Textbook for multivariable calculus with interesting modern applications
14
Explaining the symbols in definite and indefinite integrals
23
What is a good way to explain the Lebesgue integral to non-math majors?
17
How to help students bridge the gap between highschool and university mathematics?
6
Looking for realistic applications of the average and instantaneous rate of change
4
Demonstrating that integrals of some unbounded functions exist, and others do not
5
Telescoping sums to introduce integral and derivative relationship
24
Should we "program" calculus students, like the physicists seem to want us to?
10
A different symbol for the indefinite integral/antiderivative?