I am an undergraduate secondary math education major. In $2$ weeks I have to give a Number Talk in my math ed class on the problem "$3.9$ times $7.5$". I need to come up with as many different solution methods as possible.

Here is what I have come up with so far:

Are there any other possible methods the students might use? (Note: they are junior college math ed students.) Thanks!

There's a fun method which I've seen referred to as Russian peasant multiplication or ancient Egyptian multiplication. (I don't know if these names have a historical basis.)

If you think about how the algorithm works behind the scenes, it's essentially multiplying the two numbers in base 2, so it could have more than one pedagogical use.

(a) Put each number at the top of a column.

(d) Cross off every row where the number in column 1 is even.

(e) Add the numbers in column 2 that you haven't crossed off. That's the product.

Here's your example of $39\times75,$ worked out using this method: 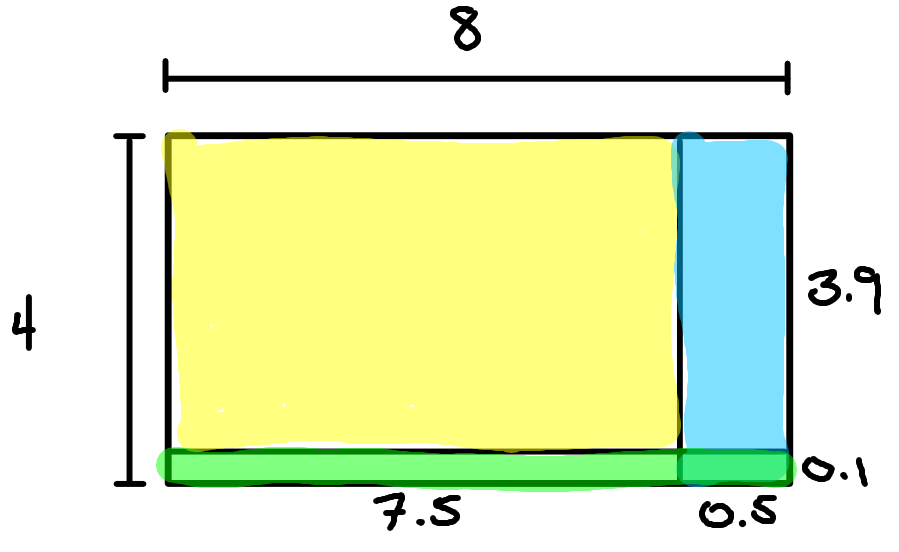 There are some advantages to this approach

However, there is a lot of extra notation running around, particularly at the two marked lines. An alternative, though similar, approach would be to skip the exponential notation and work with the decimals:

Trachtenberg methods: this depends on calculating the answer one digit at a time, starting at the units. Maybe this is what you call "lattice". This was in vogue around 1960 -- maybe it gets rediscovered every generation.

Thousands leaves only the carry. Write down 2.

On paper, it is customary to put a dot over each digit of the top number as it is used, until you get proficient.

There are specific methods for particular multipliers, but they are special cases of this method.

This slide rule is set to show the same multiplication problem, $3.9\times7.5=29.25.$ (Click on the image for a larger view showing enough detail to see what's going on.)

This is equivalent to computing the product by adding logarithms, which is yet another way to do it:

Do it in slices.

Express Each Term As A Rational Fraction

Every non-infinite decimal value can be expressed as a rational fraction. 0.153258 is just 153258/1000000. And you can multiply two rational fractions without worrying about decimal places. Then, finally at the end, you can reduce it back into decimal form.

Jokingly ask them to convert it to binary and let them discover the joy of floating point errors.

... hey, you asked for as many ways as possible, right?

Pull out your slide rule. Align the second "1" on the C scale with the "3.9" on the D scale. Move the slide to the "7.5" on the C scale and read "2.92" off the D scale. Observe that there are two decimal places in the problem, and write down the answer as approximately 29.2.

(If you want more precision, get a bigger slide rule. A standard 10-inch rule is only good for about three and a half digits.)

This answer uses the floor function (which essentially means to get rid of the decimal). You can then quickly consult a table to find 0.25*x^2.

This is similar to Xander Henderson's approach, but the calculations have been made slightly easier by using two FOIL multiplications instead of just one:

Not the answer you're looking for? Browse other questions tagged arithmetic-operations arithmetic or ask your own question.

2
At what age are most children able to convert between rational fractions and decimals?