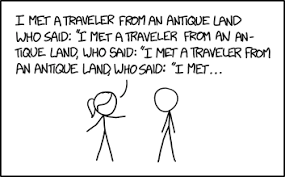 There is no consensus (the topic is controversial), but some linguists (Chomsky is one of them) argue that recursion is a particularity of human language. Only humans use recursion (the Pirahã language of an Amazonian tribe can be a counterexample). [Note: this phrase is very recursive!]

Here's the dilemma: you're going to write a math textbook for Basic School. On the one hand, it seems that using simple sentences (without recursion) would be easier for the student to understand what is being addressed. On the other hand, shouldn't the student be familiar with recursive texts, including those dealing with Mathematics?

It would be possible to build a scale over the school years of the level of recursion that can be used to have a balance between understanding of the mathematical concept to be treated and, at the same time, doing this by practicing the linguistic attribute of recursion which is a linguistic characteristic of humanity?

Moreover, are there mathematical topics that can only be described via recursion? I think that every sentence of the form A => B is recursive: A is a sentence, B is a sentence and => combines the sentences, so A => B is (linguistic) recursive.

Does anyone know of any study that deals with what is expected, in terms of the development of linguistic resources (including recursion, verb tenses, ...), throughout the school years? What language resources could (should) be used in each school grade?

Here is a text that makes an introduction to recursion in linguistics and the comparison with the use of the term in Mathematics: https://onlinelibrary.wiley.com/doi/abs/10.1002/wcs.131

Browse other questions tagged language-use or ask your own question.