What strategy for picking convergence tests for series do you teach?

Without getting bogged down in details, I'll list the names only. It seems that the strategy I generally use is this:

Those are my main categories, and then each test in the category has its own favourite type of series to work with (like ratio test with factorials and nth powers, for example) (edit: btw, the tests in each group aren't in any particular order)

But oddly, the most common thing I stress when teaching series is perseverance and practice since it's often about recognizing known patterns in unknown series

I made this flowchart for my students last time I taught this stuff. Not the best visually, but I think it effectively conveys my thought process. 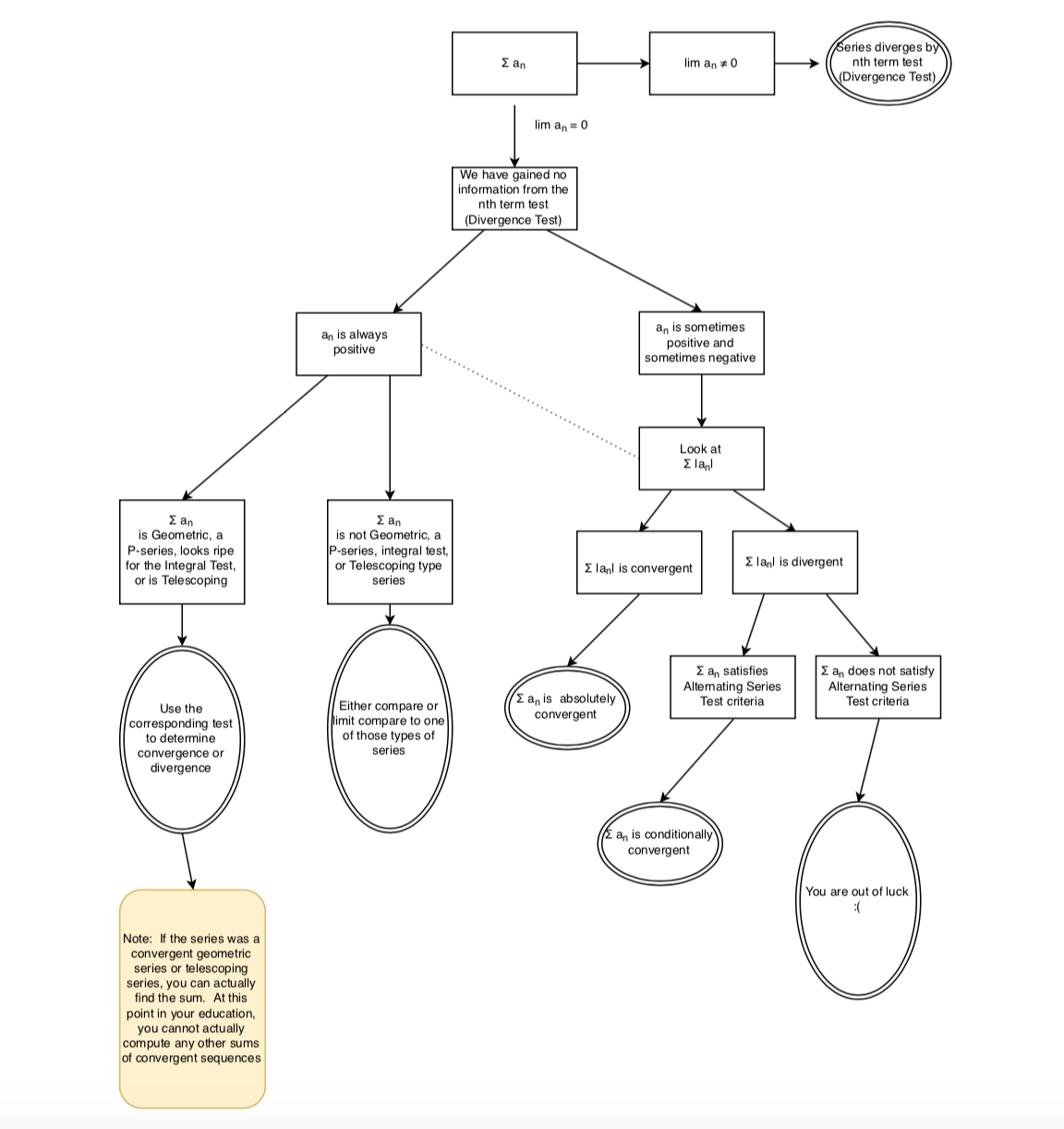 I think this is one of those places where teaching a detailed strategy is a form of "teaching to the test" that is counterproductive for the students' intellectual development.

It's important to emphasize that all the convergence tests have preconditions that must be satisfied before one can use the rule, and one should not use a test without explicitly checking that those preconditions are satisfied.

As students advance in their studies (no matter what they study), and when students use their knowledge outside of the classroom, they will often be in situations where they have a problem that they haven't been taught how to solve, but they do know a number of different potential strategies for solving the problem and will have to pick one or more to try. The problem of testing a series for convergence is a good problem on which to develop the general skill of approaching and solving this kind of problem. Part of the point of the course is to give them practice, with guidance, at developing their own strategy for this kind of problem.

Sine finding formulas for antiderivatives is a similar kind of problem, I tell students on the first day of Calc II that the main purpose of the course is to develop this general skill, and in fact that this main purpose is more important than any kind of problem they learn how to solve (which, after all, can all be done by our favorite symbolic computation software).

I don't teach this course, and I think the desire to have an algorithm this detailed may be an example of the kind of thing that people will start to feel because they're teaching the class but that people in the real world don't actually use. Students want to be told that everything is rule-based, because it makes them feel safer.

When I encounter this kind of thing in a real-world context like physics, I basically reason by analogy, and that pretty much always works.

For example, I know that $\sum n^{-1}$ diverges, but is on the ragged edge of convergence. This tells me that an example like $\sum 1/n\ln n$ may or may not converge (the extra log factor might tip it over the edge). However, if it does converge, it will converge so slowly that it would be useless to try to evaluate in any practical context. So in an application, I'm done. I don't pursue this example any further.

I don't think people in the real world know a list of tests, and in particular they don't think in terms of an "integral test." They think in terms of an integral analogy. If someone asks me to explain how I know that $\sum n^{-1}$ diverges, I'll say, "Oh, it diverges logarithmically." Never mind that what produces a log is the integral, not the sum -- everybody knows what is meant by this.

OK, so if I really still cared, the next thing I would do would be to try the analogous integral, which in Maxima is integrate(1/(x*log(x)),x,1,inf);. It tells me it diverges. OK, cool, I'm done if all I want to know is the answer.

In the real-world context I probably don't care about an actual proof, but if I did, I'd see if the CAS could do the indefinite integral. It turns out that it can, and the result is $\ln\ln x$. This shows me that it diverges, but ever so gently. If I care about writing up a human-readable argument to this effect that doesn't depend on sofwtare, then I can check that the derivative of $\ln\ln x$ really is $1/x\ln x$.

First, let's ignore geometric series and $p$-series because those are standard examples.

For infinite series with positive terms, if you really understand how sequences grow then almost all examples that occur in basic courses can be handled by the limit comparison test unless the sequence has factorials in it, in which case you use the ratio test.

The root test is largely irrelevant in basic courses because no important series with positive terms requires it. A student who goes on to study real math will find out that in fact the root test is theoretically very important as the basic idea behind Hadamard's radius of convergence formula (using $\varlimsup$ instead of $\lim$).

I taught this subject only once (two years ago). In that occasion, I wrote an one page summary for my students in the following order.

32
How can I teach my students the difference between a sequence and a series?
12
What should you do if you lose your student's exam?
29
For calculus students, what should be the intuition or motivation behind series?
13
What are some fun/nonstandard examples of arithmetic/geometric series?
10
What are some good or neat examples of computing a function's Taylor series?
18
What good is the phrase "Taylor series"?
25
Why would you teach Calculus before teaching Real Analysis?
3
Why is the convergence of infinite series covered in Calculus II?
2
Proving convergence or divergence of series: tips and recommendations
15
An introductory example for Taylor series (12th grade)