Is there an arithmetic book similar to “Teach Your Child to Read in 100 Easy Lessons” by Siegfried Engelmann?

I have found Engelmann’s book (mentioned in subject) to be extremely effective. Is there an equivalent to this book for teaching Arithmetic? I believe the overall approach or method is called Direct Instruction.

I decided to write my reply as an answer because I feel strong about both reading instruction and early math education. I hope that neither the original question nor this reply will be edited, because the question is very typical to how many approach education. But feel free to skip the rant below to the recommendation of a book.

The listicle-style title of the reference book is a tell-tale sign of a cookbook-style instruction. Listicles are fine for presenting a collection of disparate unrelated items, like 50 Italian pasta recipes or 100 best American poems. But when used in education, this approach forcefully squeezes or more often extends the subject matter and pedagogy into a Procrustes bed of arbitrary number of steps. This usually results in a bloated course with boring, repetitive and often nonsensical steps students have to follow.

Engelmann's book is 400-page long. Does it really take this long to learn to read? The book refers to "Why Johnny Can't Read" by Rudolf Flesch as an inspiration. Well, Flesch's is a good book. The first two thirds of it is a seething critique of Look-Say / Whole Language / Balanced Literacy approach, and the last twenty pages or so is a compact yet very methodical primer to teach reading phonetically. His book is a much better choice both as an insight into phonetic reading instruction as well as a reading primer.

Engelmann's book, on the other hand, is bloated with repetitive "direct instruction" script, but what ruins it completely in my opinion is non-standard grammar. To represent sounds the book uses symbols that are neither from English alphabet nor from International Phonetic Alphabet. The pronunciation guide recursively defines these funky symbols using the same symbols, like "ē" must be pronounced as "ēēē" (IPA symbol is /iː/), "sh" is pronounced as "shshsh" (IPA symbol is /ʃ/), "th" is pronounced as "ththth" (IPA symbol is /ð/ for voiced and /θ/ for voiceless consonant). Such nonsense. The symbol "ɪ" is used to represent the same sound as in the word "I" with complete disregard that in IPA the same symbol represents a sound like in "bit". Instead of giving clear instructions how to read open syllables in words like "take" (for example, "letter 'e' at the end makes preceding vowel sound like it is spelled in alphabet") Engelmann's book diminishes the terminating "e" and puts a bar over "A" to indicate that it is a long vowel, like "TĀKe". "A" in the word "take" sounds like /eɪ/ not like /ɑː/, throwing off anyone who may think that the bar means simply elongated sound.

What does the bar mean then? The book uses the bar for words like "for", "shore" and "go", writing them as "fōr", "shōre" and "gō", but is the "o" pronounced the same in these words? Regional dialects may be different, it can be something like /fɔr/, /ʃɔːr/ and /goʊ/ — these are three different sounds: "short o", "long o", and a diphthong. Between inconsistent symbols and non-standard grammar, how kids are supposed to switch to regular English? It does not have bars over letters. Does the book implicitly suggest that kids will memorize the words with the bar so they would be able to read them later without the bar? How is this better than explaining how the sound changes depending on other letters around? 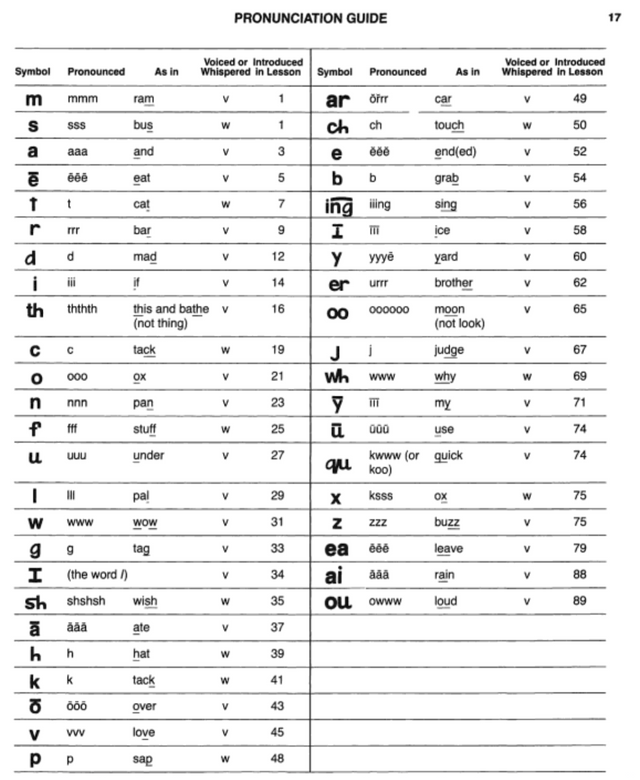 There are many books like this intended for math education. Their writers are often former elementary school teachers who have discovered a well-known practice on their own, and being happy of this amazing achievement they want to share their newly-found knowledge with everyone else, giving it a new fancy name in the process. Clearly, the job of a consultant in education pays better than of a regular teacher and comes with no burden of creating a year-long course or grading homework. But because just one or two successful practices "discovered" by those "experts" are not enough for a book, they invent intermediate steps to bloat the content, to add more pages, to get the clout of respectability through sheer weight and number of pages. (Does my previous sentence sound more trustworthy because of the repetition?)

I recommend Arithmetic For Parents by Ron Aharoni as a good starting point in teaching your child the basics of arithmetics. Ron taught at college, but then decided to try teaching young kids in elementary school. He had to find pedagogical approach different from teaching in college, but this gave him an insight to how young kids should be taught. In short, from concrete to abstract, without skipping even the smallest step.

Really, nothing new, most stuff in the book is common knowledge, but at least he does not give these centuries-old practices new names. It is not a cookbook, but it does have specific teaching advice. It does not suggest how to cut and arrange flash cards for addition facts or multiplication table, but it talks about what number is, what operations mean and why well-known algorithms work.

Also I recommend taking a look at Math-U-See course. I have never bought any products from them, I just watched their videos on YouTube, and they served as inspiration to helping my own son learn math. I did not homeschool him, but I augmented whatever he had in school with my own instruction. For example, here is a Place Value workshop — mesmerizing!

If you are not swamped by your day job and have time to devise math games and playdates and contests and whatnot, I recommend Math from Three to Seven: The Story of a Mathematical Circle for Preschoolers, written by a Russian parent who ran a "math circle" for his children and children of his friends for several years.

Not the answer you're looking for? Browse other questions tagged textbooks primary-education curriculum teaching or ask your own question.

15
Cost and benefits of compartmentalization in k-12 curriculum
8
Lie Theory: significance and relevance to undergraduate education
7
"Personalized System of Instruction" (PSI) vs. "Individually Prescribed Instruction" (IPI)
8
Subtraction using Addition (Austrian Method), is it useful to learn this method instead of the usual "borrow" method?
21
Has Benezet's teaching experiment ever been reproduced?
12
Best practices in teaching math to future elementary teachers
6
Is Plane Trigonometry by S. L. Loney still good as a textbook today?
2
Preparing elementary teachers for the praxis exam