Ask Question
Asked 1 year ago
Active 12 months ago
Viewed 157 times
1
$\begingroup$
Closed. This question is off-topic. It is not currently accepting answers.

Want to improve this question? Update the question so it's on-topic for Mathematics Educators Stack Exchange.

This is a question about the intuition of the rational number having measure zero. Let us consider followng proof:

So since $b$ can be arbitrarily small, we can conclude that $\lambda(Q)=0$.

This is a classic proof that the rationals have Lebesgue measure zero within the reals. Now intuitively we cover each rational number in $Q$ with an interval of positive length, and since $Q$ is dense in $[0,1]$, one might "feel" like the whole interval $[0,1]$ should be covered by $\bigcup J_k$, but at the same time we know that $Q$ can occupy at most $2b$ of $[0,1]$. So intuitively there must be huge gaps if we e.g. choose $b<<1/2$.

So if someone were to ask about these "gaps", can we still somehow find a "better" intuitive reasoning that somehow make sense of these gaps, or should we completely abandon this idea and reason that we ususally do not have very good intuition about infinite collections of things?

Let me build on the idea of Steven Gubkin in his comments. One way to visualize this scenario is to use Ford circles. The standard picture is to plot a circle tangent to the $x$-axis at $\frac{p}{q}$ with radius $\frac{1}{2q^2}$ where we always assume $p$ and $q$ are relatively prime. This gives an intriguing family of circles with special tangency relationships. There is a crowd of circles with small radii just above the $x$-axis that can only be visualized in the mind's eye. These come from rational numbers with large denominators. 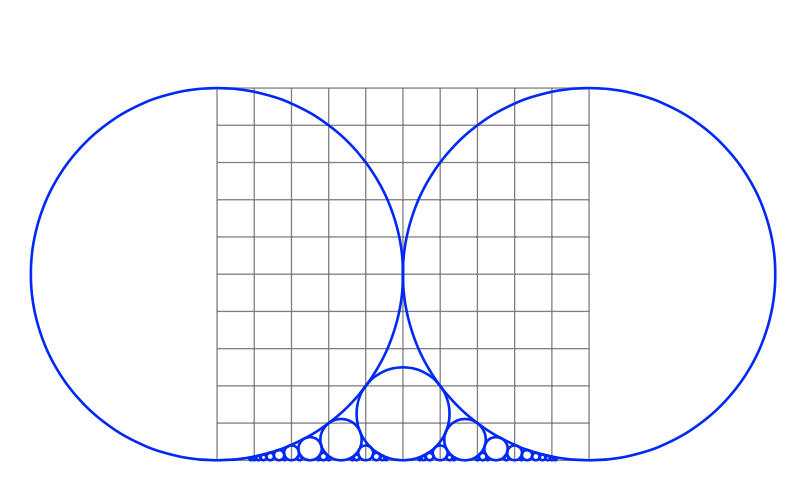 An important visualization tool afforded by this: let $0<\alpha<1$ and draw a vertical line into the Ford circles emanating from the point $(\alpha,0)$ on the $x$-axis. Then every intersection of this vertical line with a Ford circle corresponds to a rational approximation $\frac{p}{q}$ of $\alpha$ satisfying $|\alpha-\frac{p}{q}|<\frac{1}{2q^2}$. Of course it is difficult to actually see most of these intersections because the vast majority of Ford circles have small radius and blend into the $x$-axis.

Dirichlet's approximation theorem states that for all irrational $\alpha$, there are infinitely many rational numbers such that $|\alpha-\frac{p}{q}|<\frac{1}{2q^2}$. In visual terms, the vertical line emanating from $\alpha$ interests infinitely many of the Ford circles. Stated in terms of the open covering of the rationals corresponding to the depressed Ford circles, each irrational $\alpha$ is in infinitely many of the open intervals. It is important to note that the "total length" of these intervals is infinite. There are $\phi(q)$ circles with radius $\frac{1}{2q^2}$ corresponding to rationals $\frac{1}{q}, \frac{2}{q},\cdots$. Heuristically, $$\hbox{total length}=\sum_{\frac{p_i}{q_i}}\frac{1}{q_i^2}=\sum_{q_i}\frac{\phi(q_i)}{q_i ^2}\approx\sum_q \frac{1}{q}.$$

(In his comment, Steven Gubkin refers to $q^4$ instead of $q^\frac{5}{2}$. This of course works, but I found that the circles got too small to be an effective plot.)

Here is the corresponding visualization. 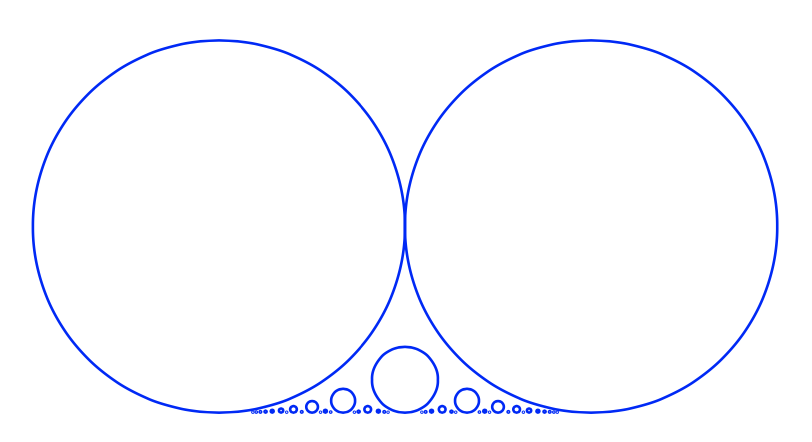 Notice that as soon as $\epsilon>0$, the beautiful tangency relationships between the Ford circles is lost. We still have an open covering of the rational numbers in $[0,1]$ by depressing these modified Ford circles. But one starts to "see," or least to anticipate, that something will change with the vertical lines and rational approximations to irrational numbers $\alpha$. Indeed, we have Roth's Theorem, which tells us that if $\alpha$ is an algebraic irrational number, then $\vert \alpha-\frac{p}{q}\vert<\frac{1}{q^{2+\epsilon}}$ has at most finitely many solutions. Thus for algebraic irrational numbers, we know that the vertical line will intersect at most finitely many modified (shrunken) Ford circles. In terms of the corresponding open covering of the rationals that we get by depressing the modified Ford circles, such $\alpha$ can be in at most finitely many of the open intervals. Also, we can see more by summing the lengths of the intervals:

In summary, by shrinking the radii of the Ford circles, we maintain an open covering of the rationals in the unit interval, but can control their radii so that the total length of this open cover is less than 1. It follows that there must be uncountably many vertical lines that do not intersect any modified Ford circle. In terms of the corresponding open cover of the rationals in the unit interval, there are uncountably many irrationals that are not in any of the subintervals.

Not the answer you're looking for? Browse other questions tagged intuition series infinity or ask your own question.

29
For calculus students, what should be the intuition or motivation behind series?
4
Promoting intuition (for undergraduate students): visual thinking, geometic approaches, etc. in the classroom
7
The role of visualization and intuition in graduate and postgraduate math and developing it
10
Communicating to students the meaning of extremely large numbers