Applications of abstract algebra outside of mathematics and suitable textbook

Thanks in part to Jyrki Lahtonen's remarks on coding theory and cryptography, I have an applied algebra book to suggest:

The preface to the first edition states:

This book originated from my lecture notes for the one-semester course which I have given many times in The University of Auckland since 1998. The goal of this book is to show the incredible power of algebra and number theory in the real world. It does not advance far in theoretical algebra, theoretical number theory or combinatorics. Instead, we concentrate on concrete objects like groups of points on elliptic curves, polynomial rings and finite fields, study their elementary properties and show their exceptional applicability to various problems in information handling. Among the applications are cryptography, secret sharing, error-correcting, fingerprinting and compression of information.

It does not replace a more traditional course on abstract algebra and indeed at The University of Auckland where Slinko teaches Algebra and Applications, a conventional course, Algebraic Structures, is also taught (see list of undergraduate courses).

For an MAA review of the first edition by Mark Hunacek, see https://www.maa.org/press/maa-reviews/algebra-for-applications, noting that an index has now been added to the second edition.

Whether Slinko's book counts as "a book dedicated to algebra", to borrow Jyrki Lahtonen's phrase, is debatable I suppose. I think Slinko tries to strike a balance between introducing the necessary algebra and giving sufficient space to the applications. I also think that in general, the line is blurred somewhat between algebra, number theory and applications. For example, some searching has revealed Niederreiter & Winterhof's Applied Number Theory, which after a review of some number theory and algebra, covers cryptography, error-correcting codes, quasi-Monte Carlo methods, pseudorandom numbers and miscellaneous further applications. Another example is Hoffstein, Pipher & Silverman's An Introduction to Mathematical Cryptography, which naturally focuses on cryptography, but introduces the necessary topics from number theory, algebra, probability and information theory to keep the book fairly self-contained. The contents of these books and Slinko's book clearly overlap to some extent.

There are a lot of applications of group theory in chemistry and physics. (I know the chemistry side of it better.)

Point groups of molecules describe their symmetry and thus their spectroscopy (bending modes for IR spectra). See for instance,

Space groups are intrinsic to X-ray crystallography, which describes a huge amount of matter (even things you don't think of as crystals, like metals or ceramics or [bulk of] computer chips, are crystalline solids). See for instance

This is a classic article:

Hayes, Brian. Group Theory in the Bedroom, and other Mathematical Diversions. Hill and Wang, 2008. Book link. "Having run out of sheep the other night, I found myself counting the ways to flip a mattress. ..." 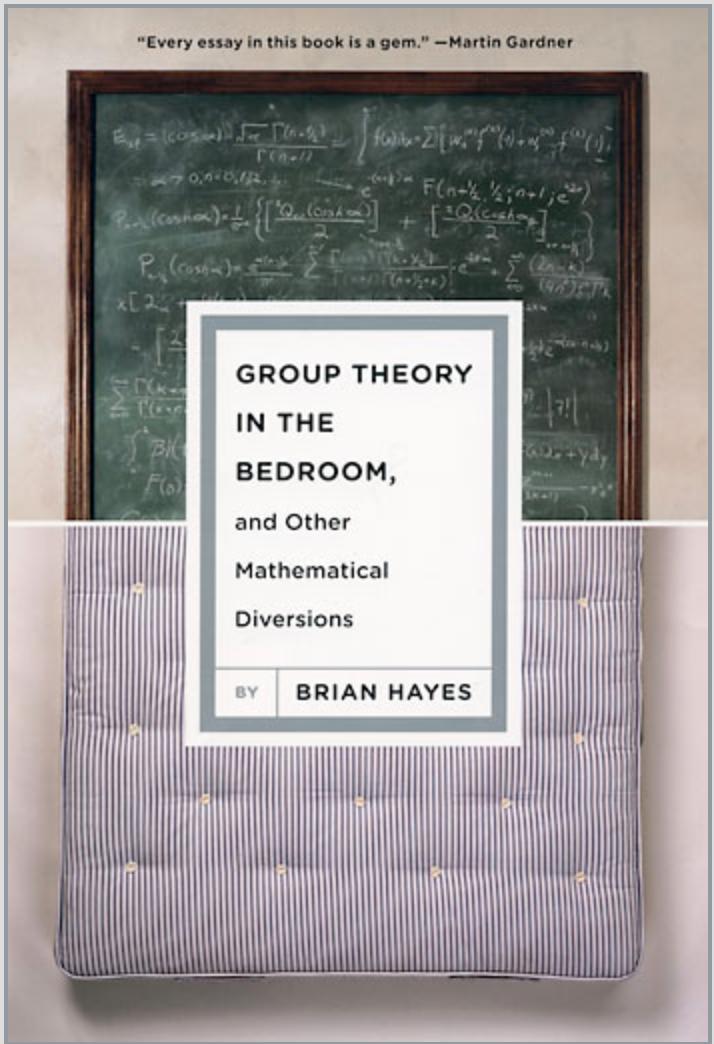 (The title refers to one article. The entire collection is worthwhile.)

Not the answer you're looking for? Browse other questions tagged undergraduate-education textbooks abstract-algebra applications or ask your own question.