Weekly quizzes as an alternative for midterms? What is this called?

I have seen (by some of my former instructors) the following strategy applied as an alternative to traditional "midterms and final" assessment in a math course:

This sounds like a method described in the following paper as second chance grading. The logistics are slightly different (less frequent exams with groups of topics, as opposed to weekly quizzes) but the main idea is similar.

An internet search for "second chance grading" didn't reveal much beyond this paper, but perhaps the term will start to be used for things like this. As one commenter said, "Not every practice in college teaching has a formal identity or name."

The image shown here is from that paper. (It's paywalled but FYI: MAA members have access to all PRIMUS issues.) 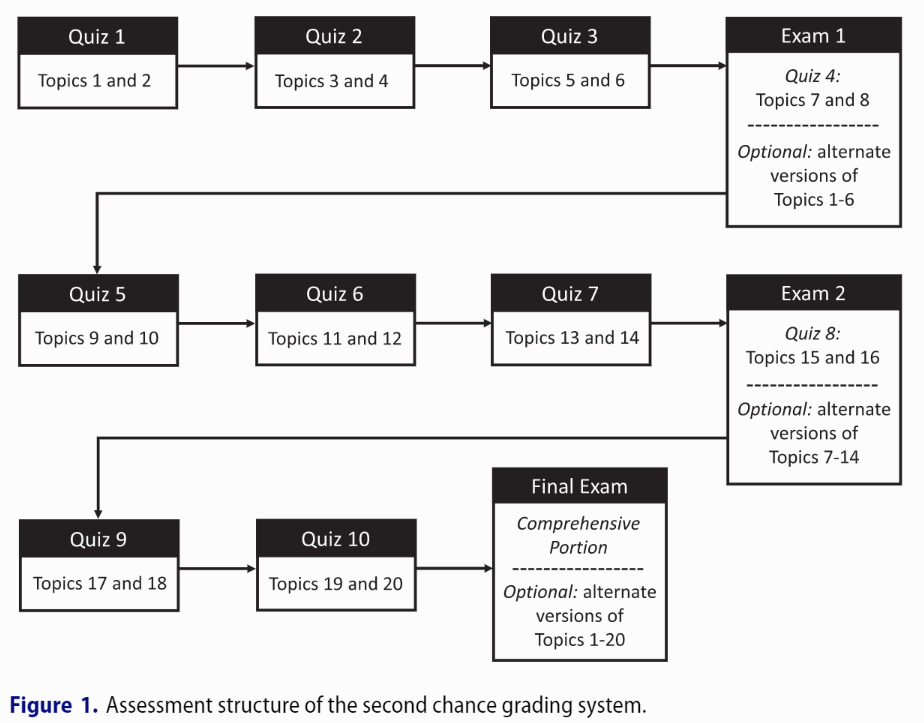 Opal: Your proposed scheme does indeed sound like the Second Chance Grading scheme I created and wrote about in PRIMUS (see the link and figure Brendan referenced). I'm happy to chat further with you -- and anyone else interested -- about the system, how it has fared since I wrote the article -- including during the pandemic (spoiler alert: it's still awesome!) -- and its connections to other grading systems.

As others have already pointed out, the scheme you (Opal) envision has elements of mastery grading in it. It also attempts to operationalize and synthesize the latest research on growth mindsets and aspects of the scholarship of teaching and learning. I highly recommend reading my article, as well as the references I cite, for more details. Send me and email (ofernand@wellesley.edu) if you can't find the article for free through your institution or library and I'll send it to you.

Not the answer you're looking for? Browse other questions tagged undergraduate-education terminology assessment or ask your own question.

59
Is it worth grading calculus homework?
16
Standards-based grading in calculus
13
What research is there on the effectiveness of multiple choice questions for summative assessment?
12
Grading homework problems on completion vs. correctness, and overall grading
21
Separating the roles of "teacher" and "assessor"
27
The Undergraduate Responsibility Gradient
42
Teaching undergraduates who expect a high-school-like learning environment
9
Can or should students do research in standard major math courses
5
Midterm in Mathematics Courses
2
Write calculus multiple choice questions with only numerical answer choices?