Is "conjugate of a binomial" a standard terminology?

In several online high school teaching resources (I do not want to single out any) I see that $a-b$ is referred to as the conjugate of $a+b$ with no restriction on $a$ and $b$.

I can understand that $a-bi$ is the conjugate of $a+bi$ when we consider complex numbers.This is a standard terminology.

After asking a question, I was directed to Galois extensions, so now I understand why we call $a-\sqrt{b}$ the conjugate of $a+\sqrt{b}$ (where $a$ and $b$ are rational and $\sqrt{b}$ is irrational).

However, I still don't understand why it is justified to use the term "conjugate" when we simply change the sign in a binomial. Is it really necessary to give names to everything? Is a formal similarity enough to use the same expression as a name? In the previous two examples the similarity is more than formal. The two type of conjugation have similar properties (since they are both special cases of a general theory). However, I do not see how changing the sign in a binomial without any restriction on the terms in the binomial fits in this general theory. 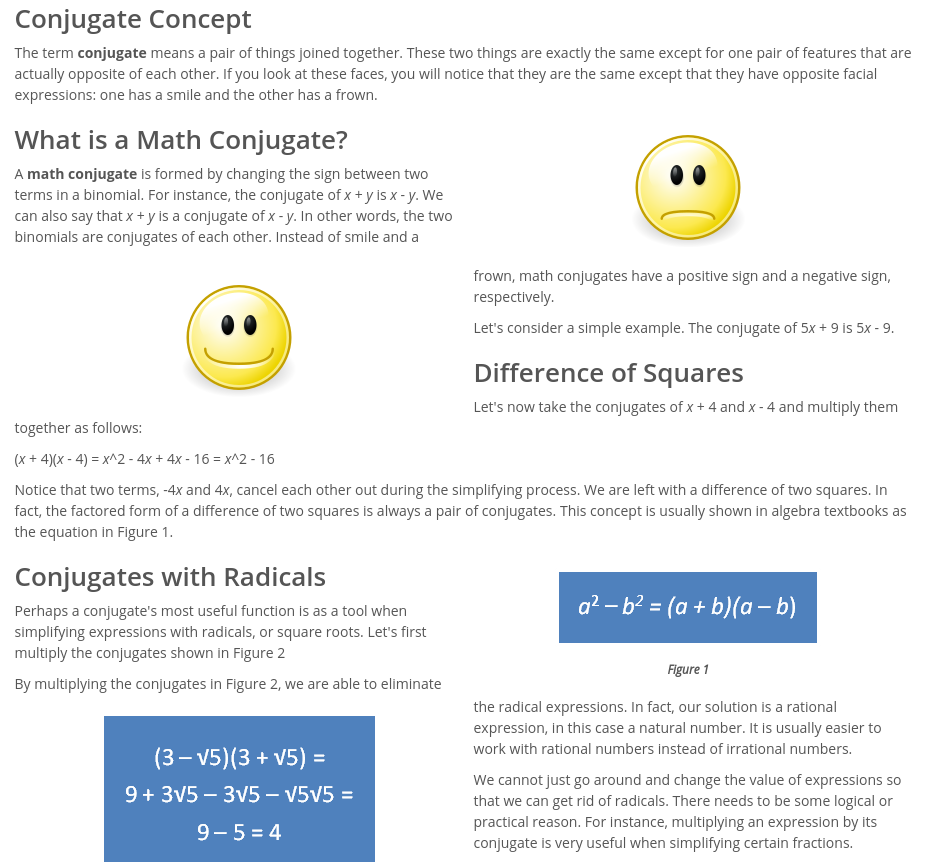 My apologies if this is slightly vague, I am trying to avoid getting further into the story of Galois theory here. You can look at Section 14.1, Example 5 in Dummit and Foote's 3rd edition where the Galois group of $x^3-2$ is shown to be $S_3$ which means there are five nontrivial automorphisms which we would call Galois conjugates.

All of this said, I would not personally say $a-b$ is the conjugate of $a+b$. I suspect such terminology is made because of similarity in the pattern discussed here for $a+bi$ or $a+b\sqrt{2}$. If I am going to do something with both $a+b$ and $a-b$ I'll likely say something about remembering the difference of squares formula $a^2-b^2 = (a+b)(a-b)$. But, that's just my personal preference.

As James mentioned, to fully appreciate the term "conjugate" here we need to know a little about Galois theory.

Anytime (in characteristic 0) we have a quadratic extension (two dimensional extension) of one field over another, we'll get a Galois group with exactly two elements: an identity and a conjugate map.

The image of an element under a Galois automorphism is called a conjugate of that element. But in the context of a quadratic extension, if we say "conjugate" we usually mean the non-trivial one (not using the identity map and just getting our element itself right back).

Much more generally, if we take any Galois extension $\mathbb{K}/\mathbb{F}$ and consider some Galois automorphism $\varphi \in \mathrm{Gal}(\mathbb{K}/\mathbb{F})$ then given $a,b \in \mathbb{K}$ where $b=\varphi(a)$, we call $a$ and $b$ conjugates (relative to that Galois group).

I have used this terminology for years. It helps students to see that being able to factor a square minus a square is powerful. There is one more context for this that I know of. When a or b is a trig function, multiplying by the conjugate gives us something that fits a Pythagorean identity. (I am now going to test whether that is always true, or just usually true.)

I don't think that this usage is standard, although it might be common. Still, I would argue that it is a reasonable enough usage that it is worth trying to fit it into the more standard theory.

As observed in the comments, the $a+b\to a-b$ rule doesn't make much sense if $a$ and $b$ are concretely realized as numbers. However, it does make sense if we are looking at an expression which lives in the multivariate polynomial ring $\mathbb{R}[a,b]$. This ring also supports several other forms of conjugacy (i.e. ring automorphisms) such as changing the sign of $a$ and swapping $a$'s and $b$'s.

tl;dr: It is fine as long as you realize that what's being conjugated are formal expressions, not the numbers themselves.

A Google search shows that this is common terminology.

Also a minus bi is often called the COMPLEX conjugate. That is to differentiate from the usual conjugate, I guess.

A comment asks if any books use this terminology. Well Google books shows several. Barron's pre calculus is a recent one. But also several algebra books from the late nineteenth and early twentieth century. Note that I'm excluding usage in terms of complex conjugated or binomial surds. But even with the very frequent usage of binomial surd, it would seem that the qualification surd differentiates from normal binomial conjugates.

I'm not sure the usage is most common. But it is certainly not uncommon. Really, what we are getting is a sounds strange to me from questioner. And Google is a helpful tool to show frequent usage. And I would caution questioners and answers to generalize from own personal experience. Sounds strange to me doesn't mean strange to the world.

For FB, well would a rose by any other name smell as sweet? We are not even kvetching about divided by zero. We are discussing terminology. And if people use the term such, how can that be wrong. Especially if common. It's just language.

Heck. My dictionary, lists one of the definitions as pairs having features in common but opposite in some particular. Further, the terms COMPLEX conjugate or binomial conjugate SURD each imply some need to further define the term conjugate...that is referring to binomials with imaginary and real or rational and sqrt irrational parts. I guess...as opposed to other sorts of conjugates.

So certainly a binomial conjugate, used as Sue and many other English speaking math teachers, for over a hundred years, is reasonable usage. It's not bastsrdizing the language. It fits fine with other uses if the word, is well defined in class, is supported in dictionaries, is common enough to be frequent, at least. Not saying it is majority though.

So anyhow if the usage is common, what is your problem with it. A rose is a rose by any other name. Oh...and a spade is a shovel. 😀

And as far as the opposite binomial surd, for rationalizing, so what? Standard method works as is and is easy to learn. Why complicate?

9
Standard word for a formula that is always true
11
Using terminology for the different concepts of rational number
6
Terminology: degree of coefficient?
5
What is the value in creating distinguishing terminology between the $x$, $y$, and $(x, y)$ values of a possible point of extremum?
4
The terminology for an excluded solution
9
Terminology for parts of limit notation
3
simple statistics (binomial) terminology