Why use the word Quadratic?

While talking about different types of equations, a student in my class asked: Why we use the word quadratic to refer to second-degree equations?

Here is some context:

1) Linear ($x^1$) equations make sense, because the graph of a linear equation is a straight line.

2) Exponential ($a^x$) equations make sense, because $x$ is in the exponent, and my students will soon learn to recognize graphs of exponential equations.

3) Cubic ($x^3$) equations make sense, because $x$ is being cubed, and my students will soon learn to recognize graphs of cubic equations.

... so why do we use the word "quadratic" to refer to second degree equations? My students already know that the graph of a quadratic equation can be called a "parabola," and the word QUADratic sounds like it has something to do with the number four, rather than squaring.

Follow up question: Would it be better to call $x^2$ equations "parabolic" referring to the shape they make when graphed? Or why not call them "squared" equations in the same way we use for higher-degree equations?

The situation for quadratic equations is in one sense exactly analogous to the one for cubic equations, except that for reasons of the development of the language some discrepancy between square, squaring and related and quadratic arose.

I am not well placed to discuss this in English but see on the English.SE site for the etymology of "quadratic": Why does “quadratic” describe second power while “quad” usually describes “four”?

Also, note that in other languages this split did not happen. In German a square is a "Quadrat," and to square is "quadrieren," and quadratic is "quadratisch." In fact from the link above it seems to quadrate was used in English too (long ago).

Thus the naming linear, quadratic, cubic follows the logic line, square, cube (as said by Joe Taxpayer) only that the development of language took one of the terms slightly apart.

I would rather advise against using the terminology parabolic equation, because this in fact breaks the logic of the naming. To add the "s" and to call them something like squared equations, as you propose, would seem relatively better to me, though also not good.

If you want to avoid any naming issues I suggest to call them first degree, second degree, third degree equations.

To sum this up: Either explain the origin of the terminology to make the (hidden) logic clear or use a simple systematic naming. But avoid introducing the term parabolic in this context.

It may be as simple as the fact that the word quadratic derives from the Latin quadratus which means square. A square has 4 sides, but the word squared is used to mean "to the power of 2".

To answer the follow on - No. Changing anything means re-writing the complete body of text to use the new designation, and un-learning the old definitions for all existing students. See discussion of tau vs pi.

As mentioned in the other answers, explaining to your students why the term "quadratic" is used, should help them to remember and understand it.

The adjective quadratic comes from the Latin word quadrātum ("square").

Summarizing succinctly: Consider objects of side-length $a \in \mathbb{R}^{+}$.

I don't have any scholarly justification for this suggestion, but it seems very plausible that quadratic equations are so called because they split the rectangle up into quadrants as so 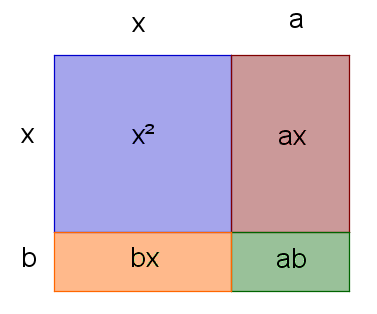 Obviously not all quadratics can be expressed in the form $(x+a)(x+b),$ but the ones that were considered solvable when the word quadratic was first being used (i.e. before the invention/acceptance of imaginary numbers) all could.

Just to add to an already interesting debate.

I'm only half joking here. The point is that trying to create too profound a link between the language used to describe things and the things themselves can result in linguistic or logical hiccups. Squares have a lot to do with the number four, it being the number of vertices, edges, lines of symmetry and number of rotational symmetries, but this breaks down for cubes, and so the language instead settled on extending the verb 'cubed' into the adjective 'cubic'. Poor language, it tries so hard to be non-arbitrary, but it was seduced by the 'fourness' of squares when, really, two is the more important number.

Not the answer you're looking for? Browse other questions tagged mathematical-pedagogy student-question or ask your own question.

21
Pi or Tau? How should the circle constant be taught?

12
The word "and" rather than "or"
15
What is the right way to order the topics in a first ODEs course?
14
What are questions from students that improved the teachers understanding of mathematics?
14
Is there research for or against such an approach in teaching calculus?
4
Why bother completing the square to find the minimum/maximum of a quadratic function?
11
Why don’t all professors let students use notes, books, etc. on exams?
4
Should young math students be taught an abstract concept of form?
10
Pros and cons of randomised question generation
7
Advice on teaching abstract algebra and logic to high-school students